When it comes to Idaho Pizza Company, there are a few strange things about my relationship with it.  First of all, aside from one time where I got a personal-sized one for lunch, I’ve never eaten their pizza.  The second odd thing would be that I’ve only ever gone there for lunch.  And third would be the fact that despite having an Idaho Pizza Company restaurant about two miles from my home in Meridian, I’ve only ever eaten at the Boise locations, primarily the one on Fairview just east of Cole. 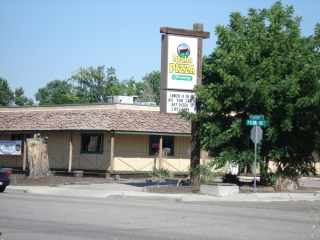 Years back (like ten of them), one of my brothers used to work at the Broadway store.  I was living in New York at the time, and on one of my visits back here my mother whisked me straight from the airport to visit him there.  Knowing that I’m not terribly fond of airline food (and would therefore be ravenous), my brother whipped me up a sandwich.  At the time, I thought he had thrown it together just for me, but I’ve since learned that it’s a menu staple.  Not a particularly healthy menu staple however, so I limit how often I allow myself to have one.  The menu describes this delectable curiosity as follows:

Now their pesto sauce is very good, but this description leaves out the most important component, which is tucked away in the general description at the beginning of the menu’s sandwich section:

Our sandwiches are served hot on our homemade bread or hoagie roll with your choice of potato salad, macaroni salad, or potato chips.

It’s not exactly hidden though.  The words “homemade bread” are, in their online menu at least, in italics, in a different color, and in a larger font.  And that bread is the key, because the sandwiches aren’t exactly stuffed full to bursting with ingredients.  It’s just a standard hot sandwich, but with truly great dressing and bread.  My sister’s a big fan too, so occasionally we’ll call in a lunch order.  On this occasion I talked her into a split-n-swap so I’d have something else to write about, so as our second sandwich we ordered the Chicken Bacon Club (gourmet garlic sauce, mozzarella/cheddar cheeses, chicken, bacon, lettuce, fresh tomatoes).

Not that the sides matter much, the sandwich is definitely the star here.  That bread, something between focaccia and pizza crust, dusted with herbs and cheese and then perfectly grilled…it’s a thing of beauty.  The lettuce and tomato are fine, the chicken good but not special, and the cheese is a nice background player as well (and what would a hot sandwich be without cheese?).  But to me, anyway, it’s all about the bread and the sauce.  And in this case, the bacon.  There’s something very flavorful about their bacon, and for some reason they crumble it instead of just laying out strips on the sandwich, so you’re unlikely to get a bite that doesn’t have at least some bacon in it.  The sauce is very good as well, but not as good as the pesto, which brings me back to my original point.

I’m not in love with the name “Turkey Pesto”.  I really do think it should be the other way around.  As you can see, there are only a few slices of turkey on this thing, but the pesto is very present.  I adore pesto, but I’m not a snob about it.  I even like the little Knorr packets (just add olive oil and water).  The key, in my not-so-humble opinion, is balance.  Too much of any of the ingredients (especially if it’s too much oil or too many pine nuts) spoil the sauce.  Idaho Pizza Company’s balance is just fine with me.  The bread is, if anything, given even more love here, seeming to have been treated with even more herbs and cheese.  The cheese inside the sandwich stands out more, but it needs to given the strength of the sauce (the cheddar/mozzarella blend from the club sandwich wouldn’t cut it, believe me).  The turkey, lettuce and tomato all do their part, which is to add substance so you’re not just eating toasted garlic bread with melted cheese and pesto smeared all over it.  The mayo you don’t really taste, but I’m sure it makes the whole affair just a little richer and creamier.  Just like the pesto sauce itself, the sandwich is all about harmony, strong flavors and subtle ones working together to achieve a result that is more than the sum of its parts.  I know, that’s a lot of praise for a sandwich, so feel free to try one yourself and tell me that I’m wrong.  So far, nobody has.

* Since this visit, I’ve tried another personal-sized pizza which I ended up being very impressed by, and finally got around to hitting up the Meridian location, though only for a sandwich.  The sandwich was, if anything, better than the Boise location’s.  I think it’s safe to say I’ll be getting a real pizza from the Meridian store in fairly short order.