Casa Mexico is a chain of five restaurants scattered around the Treasure valley.  There are three in Boise, one in Eagle, and one in Middleton.  Despite how long as they’ve been around, I only recently tried them for the first time.  The title of “Best Mexican Restaurant in Boise” is divided amongst my acquaintences, with most choosing either Casa Mexico or Chapala.  My family is part of the minority that is loyal to Fiesta Guadalajara (only the Meridian location), though I usually prefer to get my Mexican food from an eatery on wheels.  Regardless, I finally heard from enough people whose opinions I trust that Casa Mexico was the best, and I finally decided to try them.  Okay, so the Groupon deal didn’t hurt…

We ended up going on a Sunday night, even though using the Groupon invalidates the reduced-price kid’s meals that day, since all the kids ever want is a plate of rice and beans (and of course the complimentary chips and salsa). 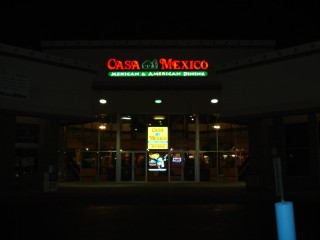 The place wasn’t terribly busy and we were led to a large, comfortable booth in the back corner.  We already knew what the toddler and the tween were getting, so we took our time perusing the menu for ourselves.  My live-in Mexican food fan, who had told me time and time again that she only ever gets the Chile Relleno, threw a curve ball this time and ordered the Vegetarian Burrito.  Even though there were other things I wanted to try, I settled on the Expresso Burrito for no other reason than that the menu described it as “The best of Casa Mexico’s menu choices!”  Our choices made, we settled in to chat, drink some soda, and soak up the atmosphere.

The food arrived before we knew it, and I have to admit that I was impressed with both the size of the portions and how good the meals looked.  For a few moments I was actually jealous of my gal’s meal, with it’s nicely grilled tortilla, sliced avocado and verde sauce.

As she chewed, a strange look crossed the face of my dining companion.  I figured there had to be something really wrong going on inside that burrito, but as it turned out it was just somewhat…unusual.  She started picking at the filling a bit and the veggies, described only as “grilled vegetables” on the menu, appeared to have come straight from an Asian stir-fry dish.  And no, I’m not exaggerating.  There was broccoli and water chestnuts involved, among other things.  I was having trouble wrapping my mind around the concept of mixing all of this stuff together and finally just had to try it.  I hate to admit that I was actually pretty impressed.  The flavors and textures didn’t crash at all, and if I were really craving something meatless (which does happen a few times every year), I think I would actually order that burrito myself.  However, I was not at that time in an anti-meat mood, and boy did I order the right thing.

I was excited just looking at this thing.  Tender, juicy chunks of pork mixed with rice, beans and cheese protruded from both ends.  The top was covered in tomato, onion, guacamole, and parmesan cheese and the whole thing was drowned in Casa Mexico’s “special sauce”.  To be honest with you, I’ve been craving this burrito again since I had it.  That seriously has to be some of the most melt-in-your-mouth good pork I’ve had the good fortune to try recently.  Sitting here now, I can’t recall a single thing wrong with that item.  It’s still not as good as Fiesta Guadalajara’s Vegetarian Burrito, but it’s pretty damn close.  I put away more of that burrtio than I should have, and as I sat there feeling like an overstuffed teddy bear I was informed that we would be getting an order of Sopapillas as well.

I don’t usually order dessert, but I’m learning to get used to it since I have three female roommates, two of whom are children.  Fiesta Guadalajara usually gives these out at the end of a meal without charging extra, but where they give you a few chips with whipped cream and raspberry syrup, Casa Mexico gives you a pretty large stack crowned with vanilla ice cream.  I had to admit that a little something sweet to combat all the savory food I just ate was probably a good idea, and I had a couple of the chips before the children could completely decimate them.

When all is said and done, my loyalty to Fiesta Guadalajara wasn’t shaken too badly. But when I’m specifically craving some amazing pork in my Mexican food, they’re going to have some serious competition…