Once again, here are the rules: I will only be reviewing pork burritos because, well, it’s me. Also, it saves me from having to take places like Taco Time and Taco Bell into consideration. I will not be purchasing any premium add-ons; if it isn’t available as a standard choice, I ain’t getting it. I’ll only be reviewing burritos from fast food chains, because bringing restaurants and taco trucks into it just casts too wide a net. And because this is a series about a specific food item from fast food chain eateries, I won’t be using my standard rating system for the atmosphere, service and so on (though I may mention those things in passing). Also, keep in mind that I’m rating this stuff for what it is, not measured against authentic Mexican food or restaurants, so an A+ doesn’t mean it’s the best food ever. And now…

I never ate at Qdoba before this visit, which makes sense because the reason I wanted to do this series to start with was to force myself to try some of the places I’ve been ignoring so I can do a fair comparison.  What I discovered in this case was a very middle of the road kind of eatery.  Not as good as places like Chipotle, but not as bad as Chronic Tacos either.  To be honest, with nothing particularly worthy of praise or terrible enough to complain loudly about, it’s been hard to motivate myself to do this write-up and I’ve been sitting on it for a while now.  Let’s just get it over with, shall we?

Tortilla – Qdoba is another of those joints that uses a steam press to warm and moisten their tortillas to make them pliable.  This is the worst result I’ve come across so far, resulting in a tortilla that was damp, flavorless and particularly chewy.  In places where it overlapped, it was like trying to eat bread dough.  Grade: C

Filling – Like many of the other burrito eateries, they use a steam table setup.  This isn’t always cause for concern, but in this case the pork was unpleasantly high in salt, and that’s coming from a man who likes his sodium.  You have the usual choice of black or pinto beans, four salsas ranging from pico de gallo to habanero (you can mix up to three if you like), cheese, and sour cream.  Grade: C+ for quality, B for customizability.

Balance – This should have been a winner as all the various ingredients were included in ratios that would normally make for a pleasant experience, but the overly salty pork and the doughy tortilla threw it out of whack.  Grade: B- 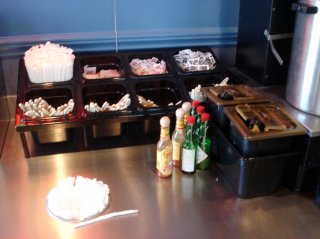 Portability – This is the one place where Qdoba excelled.  Nary the slightest of messes was made while I ate.  The rubbery tortilla ensured that.  Grade: A

When all is said and done, there’s nothing to really set Qdoba apart from the rest of the pack.  It’s entirely possible that I may have showed up on a day where the pork was a little over-salted, and perhaps the guy making my food left the tortilla in the steamer just a little too long.  However, even if you except those two factors there’s nothing particularly special here.  I’ve heard a lot of people go on about their signature and novelty options, but I’m not that interested when the standards aren’t done very well.  The food isn’t all that bad, but with so many better options around town, I don’t see myself returning to Qdoba anytime soon.  Final Grade: C-