In many parts of the world, it’s not uncommon for an eatery to specialize in one or two dishes, making them over and over again every day until they achieve a level of perfection that’s hard to imagine in a country that demands numerous and varied options everywhere they go (if you don’t believe me, check out reviews at Urbanspoon or Yelp! where restaurants actually get rated poorly for not having vegan or gluten free options, or even for not having Wi-Fi).  So if you’re going to specialize in America and expect to succeed, you’d better be damn good at what you do, right? 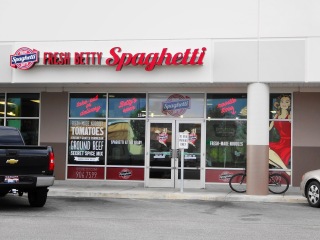 Fresh Betty Spaghetti is a new take-out and delivery joint in Meridian’s Fred Meyer plaza.  I don’t know who Betty was aside from what their website says, but they’re not just being cute with the “fresh” part of their moniker: they make their noodles and sauces in-house every day.  The menu is simple, comprised of nothing more than spaghetti with tomato sauce (with or without meat), meatballs, salad with or without their house dressing, and bread.  Or you can combine bread and meatballs and have a meatball sandwich.  And that’s it.  The greatest variety comes in the meatballs, available in “traditional” (beef and pork), beef, chicken or the current special, which on the day I went was beef and bleu cheese.  Their standard item is The Full Treatment, a meal gathering together noodles, sauce, salad and bread for one person, two people or a family.  If you have a large group or want more customization, you can buy the individual components separately.  I have no idea what the size specifics of the various options are, and the menu doesn’t say.

When I walked in to Fresh Betty, it was early evening and I was the only customer.  There were, however, about four employees.  I ordered The Full Treatment for one, meat sauce, dressed salad and two of the current special meatballs.  The business is only about a month old, at least in Boise, but they’ve been working the media presence pretty well.  Their website is obviously professionally designed, their Facebook page frequently updated, and they seem to be in good with the local radio personalities.  I chatted with the guy running the place while my order was put together, trying to ignore the fact that we had an audience of mostly idle workers.  My noodles would be very fresh.  They were just finishing them when I walked in, giving them an ever-so-slight coating of tomato sauce to prevent sticking and clumping, which is actually quite clever since they have to travel to wherever it is you’re going to eat them.  As for the food itself…

As much as I hate to say it, especially considering how much I love spaghetti and supporting local eateries, the food didn’t really grab me.  The prices are very decent, the portions huge, and like I said everything is very fresh.  I even dig their light WWII pin-up vibe.  The portion size is actually responsible for some of the problem, at least in the style of to-go container that is used for the one-person meal, especially if you don’t have a completely flat, level and stable surface in your vehicle.  There was slight sauce leakage in every direction.  The plastic bag protected my car seat, and the paper wrapping the bread helped it keep most of its integrity, but the addition of tomato sauce to the unprotected salad (a pretty standard iceberg mix) kept me from being able to judge the dressing on its own merits.  The golf ball-sized meatballs gained little from the inclusion of bleu cheese other than added saltiness (this might be unrealistic expectation on my part, I like my bleu cheese pretty pungent).  Though I kind of dug the textural difference of fresh noodles in my spaghetti (first time for me), the noodles themselves were so thick that it was nearly impossible to corral them with the small plastic fork I had been provided with.  The sauce, while also obviously fresh, didn’t have a whole lot of flavor.  This, more than anything else I think, could hurt them in the long run.  A bolder sauce alternative, be it more strongly herbed or even a little spicy, would go a long way toward getting me to make a return visit.  Having the option of spicy Italian sausage, either in a sauce or available as an add-on like the meatballs, would work as well.  I suspect a lot of others will feel the same way.

That having been said, I wouldn’t write off their chances for success.  There is always the lowest common denominator factor, which probably sounds like an insult but I swear isn’t meant to be.  The reason buffet and fast casual eateries do so well is because they play it safe, and in a family-oriented dining culture you can do just fine as long as your product is good and not too challenging.  That seems to be the card they’re playing, and they’re playing it pretty well.  I just wish they were willing to take a calculated risk for those of us who like a little more flavor and/or heat.

Food:  Big and fresh, but unfortunately a little bland as well.  B-
Value:  Very reasonable considering the portion sizes.  Definitely more pasta per person than a nutritionist would recommend.  A
Service:  Fast, friendly and very attentive for a take-out counter.  A
Atmosphere:  As I said, I dig the WWII and pin-up thing they’re doing, right down to the glass bottle soda, but it’s a little glossy.  I’d like it a bit more fleshed out but I suspect they just want to keep it bright and family friendly.  B-
Final Grade:  B