So the Boise International Market at Franklin and Curtis has actually been open for a little while.  Like for two months now.  But selfish jerk that I am, I didn’t bother visiting them until the eateries started opening.  This is gonna be a long one, but here’s the short version: Go.  It’s very worthwhile, and it’s open seven days a week from 11-8 (individual businesses may vary).  And now, some details… 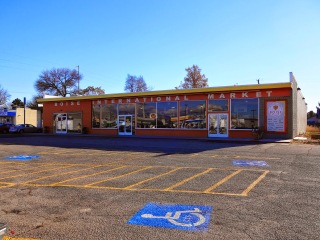 My first visit was just a stop one evening to look around.  I didn’t end up eating anything, but I did grab a coffee from Kahve to go.  I didn’t get any pictures of it (paper cups aren’t that exciting to look at), but that quick perusal and that coffee were enough to bring me back a few days later.When you walk in the door, you’re greeted by a display of pictures showing the remains of the burnt-out Vietnamese Restaurant that stood on the spot last year, and how it evolved into what it is today.  Of course, my attention was more focused on the list of current and upcoming eateries… 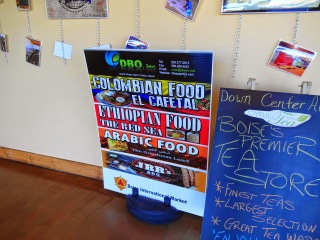 Kahve is the first business you encounter upon entering, which is fine with me because it’s the only one I’ve stopped at every single time I’ve hit the BIM.  On that second visit I went straight past them to the only real eatery that was open for business at that time, Kibrom’s, which so far as I know is the first Ethiopian restaurant ever in the Boise area.  Perhaps even in the whole state of Idaho.  They don’t have a website, but they do have a YouTube video…

Never having encountered Ethiopian or Eritrean cuisine, I admittedly had no idea what I was doing.  Luckily, the restaurant’s proprietor is very helpful and very direct. 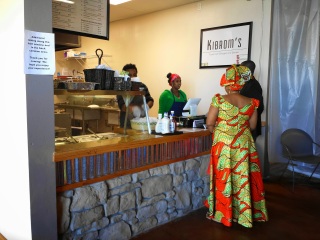 The only things I do know about the style of food Kibrom’s serves is that it tends to be spicy and eaten with the hand.  Kibrom told me that he does ease off the heat a bit for the local palate, but I wasn’t taking any chances on a first outing.  I knew I wanted Shiro (a kind of sauce made from chickpeas and herbs), but I couldn’t decide between White Tibs (beef and onion sauteed with mild spices) and Alicha with Beef (kind a stew made with beef obviously, onion, potato, chile, and alicha spices).  Since I’m a glutton, I got both.

All of this cost less than ten bucks and arrived served on injera, a kind of porous, sourdough flatbread that is the the Swiss Army Knife of cuisine: it is plate, utensil and meal component all in one.  Rice is available for those who wish it, but unless you specify they seem to default to injera.  Whichever you choose, the starches are all-you-can-eat until you’ve polished off everything.  The trick with injera is to tear off a chunk and use it to pinch a bit of one or more of the menu items, then transfer it to your mouth without fouling yourself, the table or the floor in the process.  Bonus points if you can pop it into your mouth without actually touching your fingers to lips, teeth or tongue, since this style of food is often shared with others.  Not this time, though.  I knew enough to fast all day in preparation for this, and polished off every delicious morsel myself.  I enjoyed everything, the beef and potatoes tender, the salad crisp, the Shiro a pleasant surprise that I expected to be something like hummus but which turned out to be saucier and more flavorful.  One word of warning: mild pertains to the sauces and spices rather than the dishes themselves.  As mild as these selections were, several still contained sliced chiles, seeds intact.  The heat from them doesn’t permeate the other components, so I never really noticed it unless I specifically ate a chunk of pepper,  If you’re really sensitive to that kind of heat, I’d suggest asking Kibrom which dishes have peppers so you can avoid them.  As for me, I intend to try something hotter next time.  I have to say there is something fun and intimate about eating with one’s hands as opposed to a utensil.  The attention you have to pay to the process of eating really focuses you on the experience. 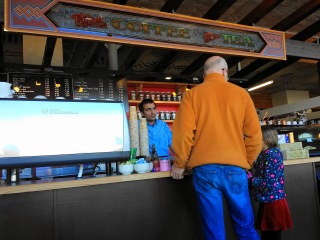 After that I headed to Kahve again, this time to actually sit and have a coffee.  The guys who run the place (Nawid and I’m absolutely horrified that I don’t know how to spell the other guy’s name and can’t find it anywhere online) really know their coffee.  Seriously.  Ask them, they’ll tell you all about where they get their beans and the different preparations necessary for the different varieties.  It’s so much more refreshing than the faux bonhomie or manic interrogation you get from many baristas.

On this particular visit, I ordered a Cuban coffee.  I’d been craving one since my recent visit to the only Cuban restaurant in town, where I discovered they just serve you an espresso with some sugar cubes on the side.  At Kahve, they use an old-school stovetop espresso maker and mix a little bit of the brew with a fair amount of sugar to make the signature foam.  It’s sweet, it’s strong, and it reminded me that I LOVE coffee.  For too long I’ve taken coffee for granted, grabbing lattes from drive-thrus to chug absentmindedly while driving to work or running errands.  I’m not saying I’m going to stop that behavior, just saying that I will be taking more opportunities to really sit and enjoy good quality coffee, and for me chatting with a couple of guys who really know and love coffee (order something they haven’t had in a while or made in a slightly unique way, and they will make extra and drink it behind the counter after they’ve served you) just adds to the experience.

Did I mention they have sweets as well?  I picked up some Swedish rosette cookies, some of the best baklava I’ve ever had, and interesting little balls of chewy coconut goodness containing a whole almond and dusted lightly with chopped pistachio that I don’t recall the name of.  These are all prepared by the mother of one of the proprietors, and very reasonably priced considering what a sugar cookie goes for at some coffee shops.  They also have tea and smoothies, which I might get around to trying someday. 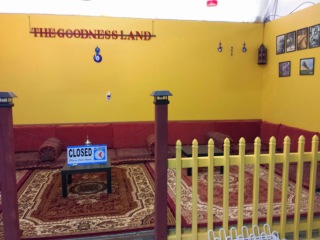 A few days later I returned on the day the second BIM eatery, The Goodness Land, opened for business.  Their focus is Arabic food, and they even have some traditional floor seating slated to open next week.  As for me, I ate at the bar, looking into the kitchen.

The Goodness Land also does catering and has a fairly extensive menu, but at the restaurant not everything is available at the same time because they simply don’t have the staff or space (pretty much everything in the BIM is a family-run business).  As I perused the menu Salam, proprietor and chef extraordinaire, approached and told me what was actually available that day.  Lucky for me, that day’s rotation was heavy on lamb options.  I opted for the Iraqi dish called Qwzi on the menu, there are a few different spellings but it’s pronounced like that thing you slip over a can of beer or soda and is comprised of bone-in lamb, rice, and various accompaniments.

I had fasted all day before this meal too, but when the platter (I said platter on purpose, this is not a plate) was set in front of me I felt my confidence wane.  This surely wasn’t a dish for one person.  And for less than fourteen dollars?!  Salad, sliced radishes, Thai(?) basil leaves, seasoned onions, pickled peppers, fried potatoes, and a good serving of lamb sat before me.  Oh, the rice.  Have I not mentioned the large pile of yellow rice topped with white rice topped with what seemed to be chopped noodles, like some kind of gourmet version of Rice-a-Roni?  Seriously, I wonder if this is where they got the idea to mix vermicelli into rice when they created that “San Francisco treat”.  There were also two cups of amazing sauce, both creamy, one garlicky and the other spicy (there’s Sriracha in it, among other things).  And it all seemed to be served on something resembling a tortilla.  I surveyed this for a few seconds, trying to figure out where to start, what would go best with what, wondering if I could actually eat all of this…

…when this was set in front of me as well, next to the giant platter.  At this point I just shrugged and dug in.  I was enjoying mixing bits of everything except the rice, which I was enjoying entirely on it’s own, together and wrapping the bread around it to eat taco-style, when another cup of sauce was passed to me.  This one resembled tzatziki, though a thicker and chunkier version.  Salam suggested I dip my rice in it.  I’ll admit I was a little incredulous.  Dip rice?  Really?  But it worked.  It was also terrific on the lamb, of course.  I resumed my experimenting, mixing different combinations with different sauces, with or without bread, and it was all very, very good, but I hope that rice is available as a side, because I’m going to want it with everything I order from The Goodness Land for a while.  Salam also says he makes the best falafel in town, and I can’t wait to see if he’s right.  Oh, and in case you’re wondering: no, I couldn’t finish it all.  But I did my best!

And as I said before, every trip to the BIM has involved another stop at Kahve.  This time, I ordered a Turkish coffee because it’s been years since I had one.  Just because the drinks at Kahve are very reasonably priced doesn’t mean that that they skimp on anything.  My coffee was brewed slow and stirred constantly until it achieved a texture I can only think to describe as creamy, even though there is obviously no cream in the coffee itself.  And dig that presentation!  Tray, cup holder, sugar dish and spoon, all ornately designed metal, the kind of thing that makes you feel like a king to be using until a little girl approaches the counter and asks if she can buy a set for tea parties.  Honestly though, I prefer the richer, bolder Cuban coffee, and I think that is going to become my go-to even if it means giving up the decorative presentation.

I would enthusiastically recommend visiting Boise International Market based on these three businesses alone, and that doesn’t even take into account the grocery and goods vendors available.  In the next few months, a Colombian eatery and one serving Carolina-style barbecue (international means international, after all) are slated to open, and there will be others as well.  There is still a fair amount of room available.  For this to succeed, they really need people to come check the place out sooner than later, and I encourage you to do so.  Trust me, it’s easy to find something to love.  Or multiple things, if you’re anything like me.  Think about it.  I’ll leave you with some more pictures, many of which suck because I was trying to be quick and covert about taking them, and which I can see now didn’t help a thing because there are people looking right at me in several of them. 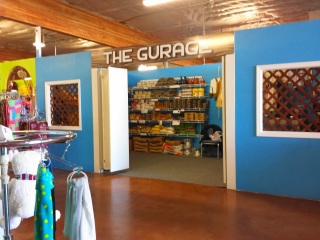 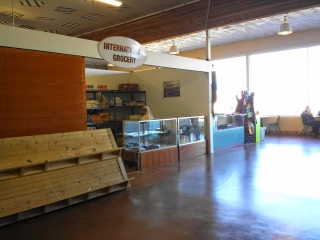 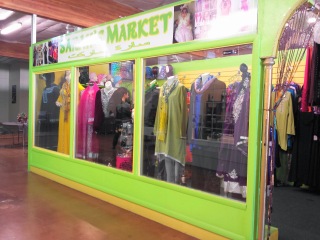 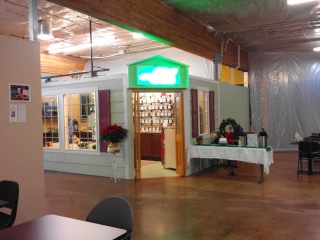 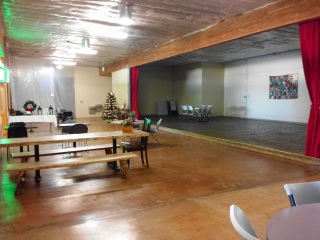 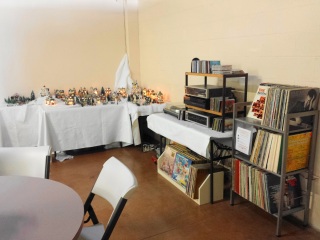 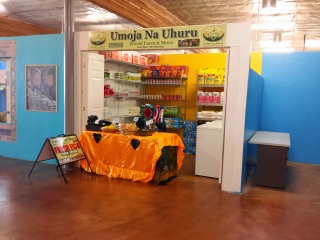 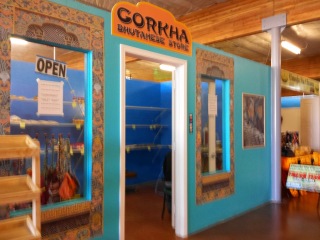 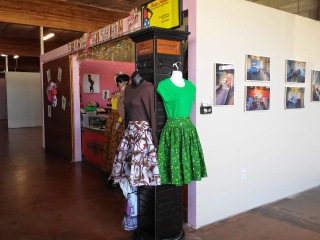 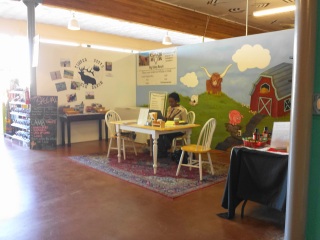 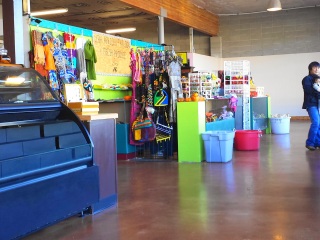