So my New Year’s resolution was to post more stuff more often, and while I’m sure it will be every bit as successful as all the previous times I’ve made that promise, I figure I should at least make an effort.  The good folks at Blue Ice Vodka apparently wanted me to post, because they sent me a bottle of their Handcrafted American Potato variety to make my annual Christmas cookie baking marathon more tolerable. 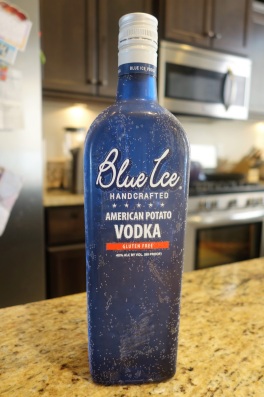 If I’d been offered the option, I would have chosen one of their Heisenberg commemorative bottles, but when someone else is buying the drinks you shouldn’t get greedy.  Blue Ice is an Idaho success story, started in Idaho by people from Idaho and made with Idaho ingredients, primary among which are Idaho Russet Burbank potatoes.

Now while I like a good tipple as much as the next person, vodka is hardly my drink of choice (I’m a whiskey guy).  Still, as an Idaho guy writing an Idaho blog, I guess this was a natural fit.  Ms. Golden Rule was certainly happy about it since, as she put it, she’s an Idaho girl who loves potatoes and vodka.  The Blue Ice team were kind enough to forward some holiday cocktail recipes, and I did some searching on my own, but apparently Christmas cocktails tend to be somewhat complicated, and would have required me to purchase several other spirits that I never would have gotten around to using all of.  So, I decided to keep things simple.

I figured I should sample the vodka on its own first and was surprised by how smooth it is, and that you actually could subtly taste the potato in it.  Now it was time to take it seasonal, so I began with a shot glass made of candy cane that I happened across while buying cookie ingredients at Winco.  Cute, but things could get sticky if you keep using it, so I’m not sure I’d recommend this method since the only benefit is a very slight peppermint flavor.  That having been said, so far so good.

One thing I will say about vodka is that it makes the best brunch cocktails, and since it was early afternoon I flipped a mental coin and decided to go with screwdrivers (Bloody Marys lost the toss).  As I suspected would happen with a vodka this smooth, it virtually disappeared, so if you use a high quality orange juice you’ll be very happy with this.  We certainly were! 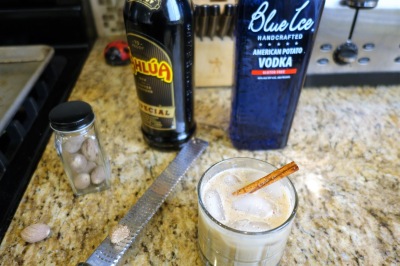 Next was my attempt to do something more holiday focused, a slightly different take on a White Russian.  This one involved swapping the cream for egg nog, and finishing with a cinnamon stick and freshly ground nutmeg.  The result was rich and sweet, and would probably be a good compromise if you couldn’t decide between having a drink and having a dessert.  It was yummy, but a bit heavy for my taste.  Then again regular White Russians are as well.  If you like that kind of cocktail, give it a spin sometime. 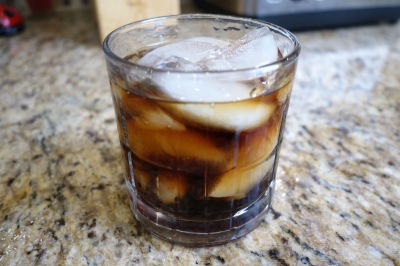 By this point it was clear that for the first time since I’d started making them, my cookies weren’t going to turn out this time.  I assure you, it had nothing to do with the drinking and everything to do with the candied ginger from Winco’s bulk section.  When I finally surrendered for the day, I decided that something a little stronger was in order.  Since I already had the Kahlúa on hand, I figured a Black Russian was an obvious choice.  Once again the Blue Ice pulled its vanishing act and really let the Kahlúa shine.  Since I was using the Especial type which is only 10 proof less than the vodka itself, this drink not only had the power to soothe my troubled spirit, it almost made me forget that I was upset in the first place.  If you dig Black Russians, I think you’ll be pleased with this combination.

That’s about it for this one.  If you’re looking for a smooth vodka, a potato vodka, and/or an Idaho vodka, Blue Ice is available at every Idaho liquor store I’ve visited.  If you’re gun shy about committing to a full bottle (though the price is very reasonable), I’ve seen the minis at most of them as well.  Check it out, and tell ’em Track sent you*!

*Don’t actually tell them I sent you, that’s just one of those things people say.  I can assure you the liquor store clerks have no idea who I am and will probably just look at you strangely.