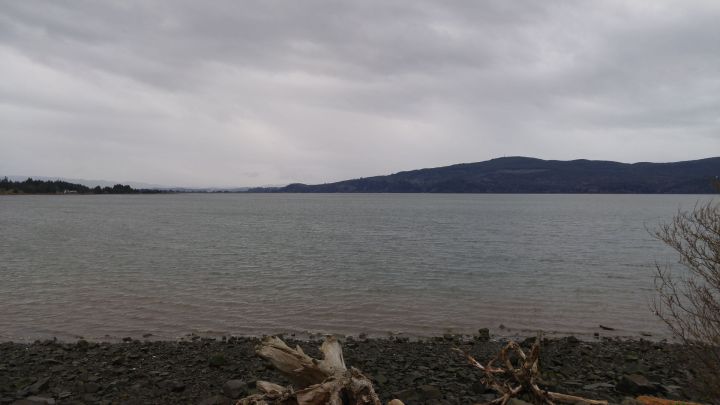 In spite of all the places I’ve yet to visit, and even all of the ones I’ve visited and loved, my mind probably returns to the Oregon Coast more than any other.  It’s familiar, it’s safe, I love the weather, it’s relatively inexpensive, and the seafood is, of course, awesome.  A few months back I was on a weekend trip to Portland with Mom, Sis, and my oldest niece and, rather than try to find something in the city that everyone would find worthwhile and economically viable, I decided we should drive the 90 minutes and spend the day at the Ocean instead.  Mom ruined her part of the surprise by suggesting the same thing when I was trying to suss out whether anybody had anything they wanted to do while we were in Portland, but the other two didn’t piece it together until we crested a hill and saw water stretching off as far as the eye could see.  We had an extremely forgettable breakfast that I probably won’t ever bother writing about, drove up and down the Coast a bit, stopped at Rockaway Beach so everyone could get their feet wet and my niece could bring a bunch of rocks and shells back to deposit sand and stench in my car, and before any of us was entirely willing to do so it was time to head back.  After a bite to eat of course.  I almost never go anywhere without at least one must-stop restaurant in mind, and this time it was a little café called The Fish Peddler.

Actually, The Fish Peddler is a little café/seafood market located at the Pacific Oyster farm/production plant on Tillamook Bay.  In fact, if you show up at the right time you can eat oysters while watching a team of professionals shuck the hell out of more of them.  Alas, we were to have our dinner without a show this time.  As per usual, everyone scanned the menu and placed their orders, with yours truly ordering way too much food just so I could try a lot of different things.  This is a good reason to travel in groups, so you’ll have people to help you finish all the stuff you ordered just so you could try it.

I decided to start us off with half a dozen petites and an oyster shooter for each of the adults (I’m pretty sure you have to have an oyster shooter on every trip to the Coast, I think it’s a law or something).  They were pretty terrific, and I preferred the shell to the shooter as usual.  This trip was special because my sister hadn’t ever had an oyster on the shell, and my niece had never had an oyster at all.  Sis wasn’t thrilled with the prospect, she got it down okay but I think she’ll stick with the shooters moving forward.  My niece on the other hand…she looked like she was eating a piece of dog shit on a dare in exchange for an insultingly low amount of money.  I wish I could show you the video I took, but I’m sure she’d kill me when she gets a little older.  She chewed and chewed, face turning red and eyes bulging, the adults repeating “chew” and “swallow” and “you can do it” until it became a chant.  When it suddenly looked like she was going to launch the surely pulped oyster (along with everything else in her body) across the table, we told her to go to the bathroom and get things under control.

I took this opportunity to turn my attention to my oyster stew, one of the more highly recommended menu items.  Suffice it to say I may never eat clam chowder again.  I don’t know what all was in it, but it was delicious.  Rich, buttery, well-seasoned, creamy, and with an insanely generous amount of oysters.  I don’t even remember how many there were.  Four?  I think it was five actually, or maybe even a half-dozen.  It was well worth the price, and get this: you can double the number of oysters for an extra couple of bucks.

Ah, the resilience of youth.  My niece came back from her near-vomit experience ready to tackle her order of prawns & chips.  Half a dozen of them, good-sized, perfectly fried, and not overly greasy.  The fries were fries, crispy and golden, and surprisingly non-greasy as well.  They weren’t anything special, but they were decent and non-offensive, which oftentimes is impressive enough in my experience.  It never fails to amaze me how many places find a way to screw up such a ubiquitous menu item.  Anyway, she dug them.  And that brings us to the main event…

Every seafood shack has that one plate that’s basically a little bit of everything, fried.  The Captain’s Platter is a pretty common name for this dish, and that’s what it’s called at The Fish Peddler.  Their version comes with oysters, shrimp, fish, crab cake, and clam strips.  Oddly enough it’s served not on a bed of fries, but rather with a roasted veggie medley consisting of red potatoes, broccoli, and cauliflower.  It doesn’t quite negate the effects of all the breading on the proteins or the oil used to crisp it (though once again, the food is very light on the grease), but at least it doesn’t add to it.  Plus, it breaks things up a bit.  I love veggies, and have no issues with some healthy sides accompanying my non-healthy entrée.  Once again, everything was amazing.  Perfectly cooked (so important with shellfish, rubbery mollusks make me sad), the fish was flaky and juicy, and the crab cake was the crabbiest one I’ve ever had.

Did I mention The Fish Peddler has a gift shop?  They have a huge selection of things emblazoned with the words “nothing in life prepares you for your first raw oyster”.  I had my eye on a t-shirt for my niece, after all it’s not often that you can give a gift that speaks of both pride and mockery.  Unbeknownst to us, however, the earlier spectacle had been enjoyed by more people than just those at our table.  As we were wrapping up our meal, a nice couple approached and presented my niece with the very shirt I’d had my eye on. 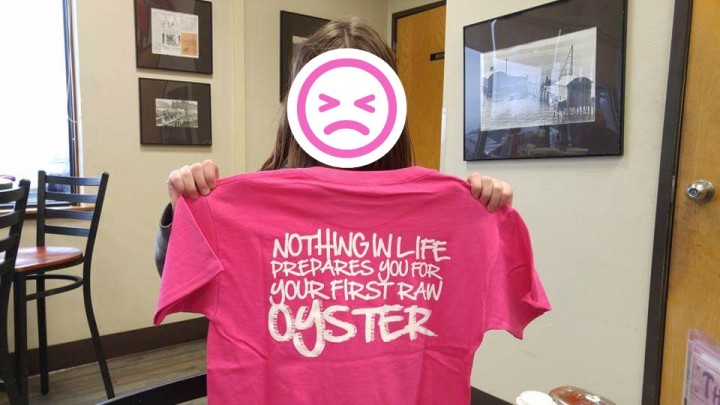 Dinner and a show after all!  Can’t beat that, am I right?  I left satisfied, happy with both my meal and the fact that the much-touted aphrodisiac qualities of oysters are bullshit, because with that many in my system I should have been tearing through the countryside like The Incredible Hulk on a Viagra bender.  I’ll definitely be back, especially since I didn’t get around to trying any of their baked oysters.  I’ve got my eye on the Oysters Tillamook, which are topped with bacon, red onion, and shredded sharp Tillamook cheddar cheese.  Maybe next year when the new Tillamook Cheese Factory Visitor’s Center opens…