If you’ve followed me over from the old site, or have seen my Facebook or Instagram pages, there’s a good chance you’re aware of my fondness for dim sum.  And while variety is the spice of life (or maybe it’s smoked paprika, I can never keep that straight), sometimes you just want to go to a place that specializes, that does one thing better than most.  Din Tai Fung is a dumpling restaurant that started in Taiwan and expanded internationally, eventually making it to the Seattle area.

But we’re not talking about them in this post, because at the time of this trip they were not conveniently located.  That has since changed as they’ve opened up a couple of new spots in the Seattle area this year, and we’ll be talking about them more in depth in another post (coming soon, I almost guarantee it!), but today we’re talking about their stiffest competition, Dough Zone Dumpling House.  They’re not as fancy, they don’t have the same immersive atmosphere, but what they do have is a whole lot of steaming hot dumplings for a more reasonable price.  As of right now, both Din Tai Fung and Dough Zone each have four locations spread around Seattle and its neighboring cities.  Well, actually Dough Zone doesn’t have any locations IN Seattle proper, but they have a location slated to open in the International District, which is a major coup as far as I’m concerned.  Then again, I spend most of my time in Seattle bouncing back and forth between the International District and Pike Place Market, so I may be a little biased.  The Dough Zone I visited is their newest and largest location, in a strip mall in Issaquah.  Mom and Sis were with me on this trip, as they somehow have been almost every single time I’ve tried a new dim sum place.  As is always the case when dining at places like this, I was left in charge of ordering.  Not because my family is nervous about doing it or whatever, but they know that I’m generally going to order about half the menu and they’ll get to try everything anyway.  I have no amusing anecdotes about this dining experience, so let’s just get straight to the food. 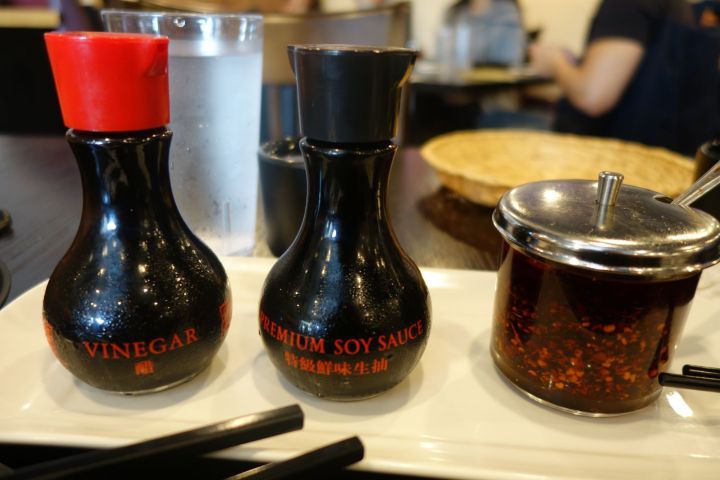 A word about condiments first.  When you go to a dumpling joint, THIS is what you want to see at your table.  Some places will just bring you pre-mixed sauces, but to me that’s just too narrowly focused.  Some people just like soy sauce, others prefer their dipping sauce heavy on the vinegar, and of course the spicy factor is always divisive.  Dough Zone has the selection on each table, and bring you a little bowl of shredded ginger to mix it into. 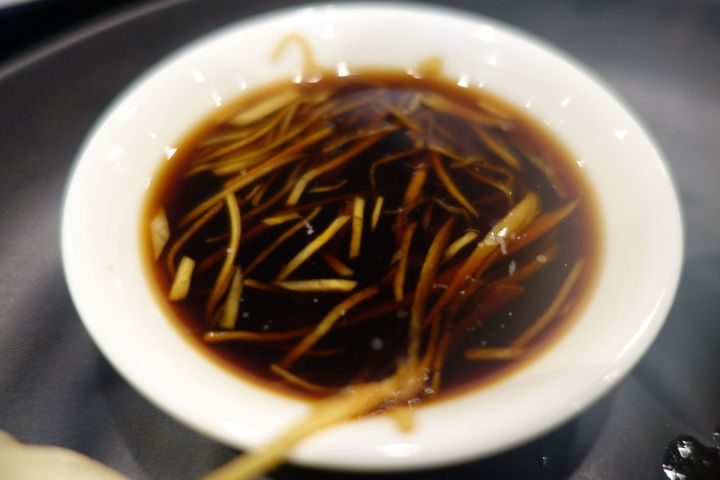 NOW we’re ready to go.  I ordered a bunch of stuff, and from what I could tell there was no rhyme or reason to how it was brought out, so I’m not going to bother putting it in a sensible order either. 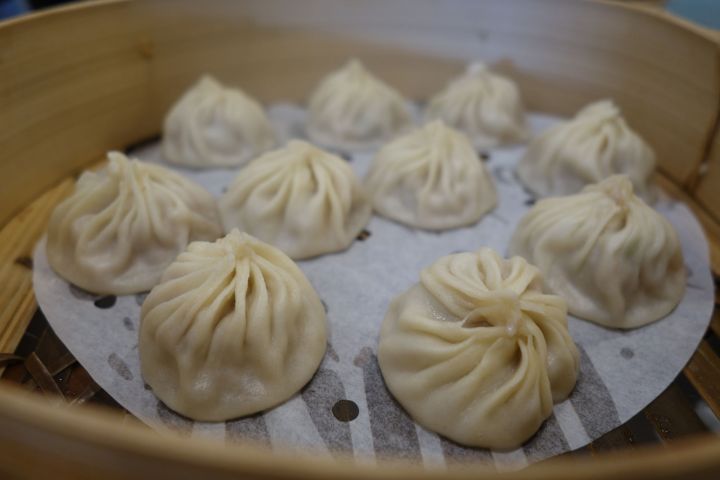 The star of the show, Xiao Long Bao.  As I said before, Dough Zone specializes, and what they specialize in is xiao long bao, also known as “soup dumplings”, which are traditionally made by putting meat (usually pork and/or crab) and aspic (essentially a gelatin made from stock) into a dumpling wrapper.  As the dumplings are steamed, the gelatin melts, hence the soup.  It is these dumplings that set both Dough Zone and Din Tai Fung apart from the other dim sum joints, who have soup dumplings that tend not to be all that soupy, and which are usually not that hot anymore once the cart finally makes it to your table.  Quite often the skin also tears as you try to maneuver the dumpling out of the basket and you lose most of the soup anyway.  This doesn’t, or shouldn’t, happen in places that specialize in xiao long bao.  The dumplings should arrive scalding hot and be able to be removed from the basket without risking disappointment or injury.  That can be said of both the pork variety, which were amazing, and the crab variety, which were good if not quite as memorable. 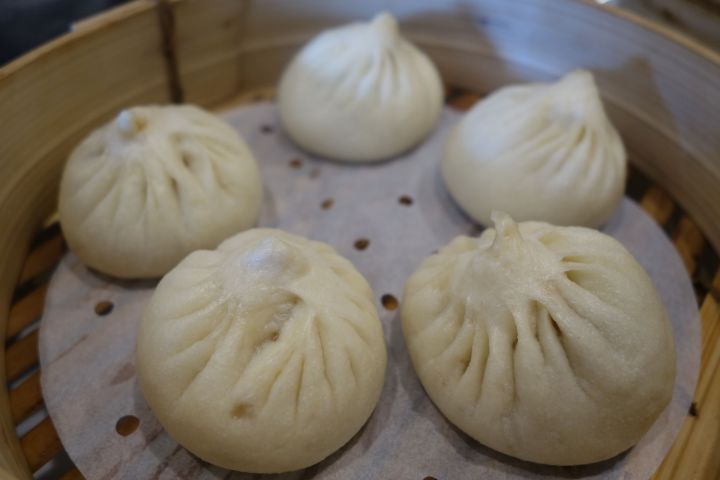 It’s hard to know what to expect when you go to an Asian restaurant and see something simply labeled “Pork Buns” on the menu.  In a lot of places you’ll get chopped, sweet barbecue pork.  At Dough Zone, they’re closer to yet another variation on the xiao long bao, with steamed bread replacing the dumpling skin.  Still delicious and a little different. 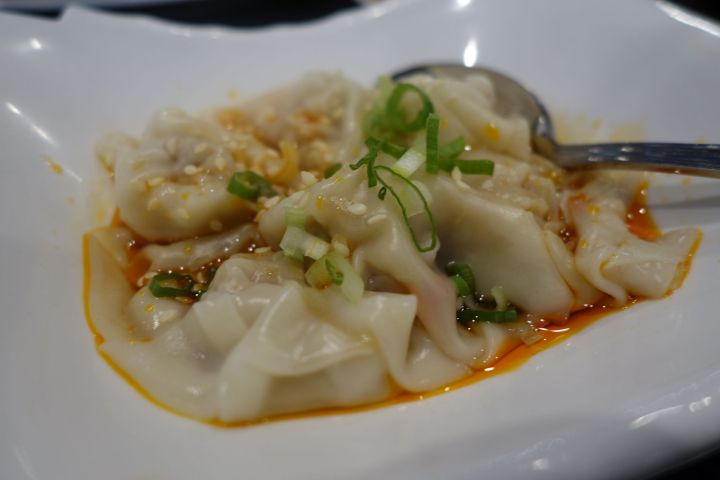 Next we have what ended up being one of my favorite items of the night, Chao Shou in Szechuan Sauce, steamed pork-filled won tons bathed in chili-infused oil.  Given the mild flavors (pre-sauce) of the dumplings so far, the potent but not overwhelming spiciness of these was perfect for livening things up a bit. 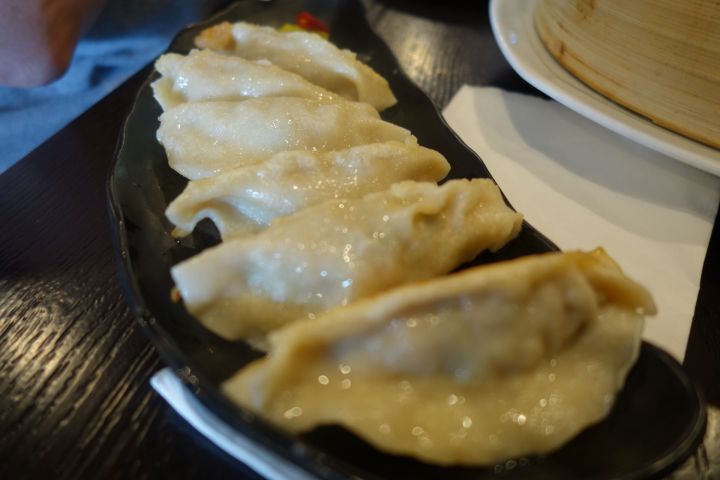 Of course I had to get an order of pot stickers, which are one of my mother’s favorite styles of dumpling.  I’m not so big on them, because in a lot of places you just get a lump of gamy, barely seasoned pork in a greasy wrapper.  Dough Zone’s are definitely a wetter variety, but beautifully crispy on the bottom, and the inclusion of shrimp and some vegetation makes for a lighter experience.  Definitely recommended, if you like pot stickers. 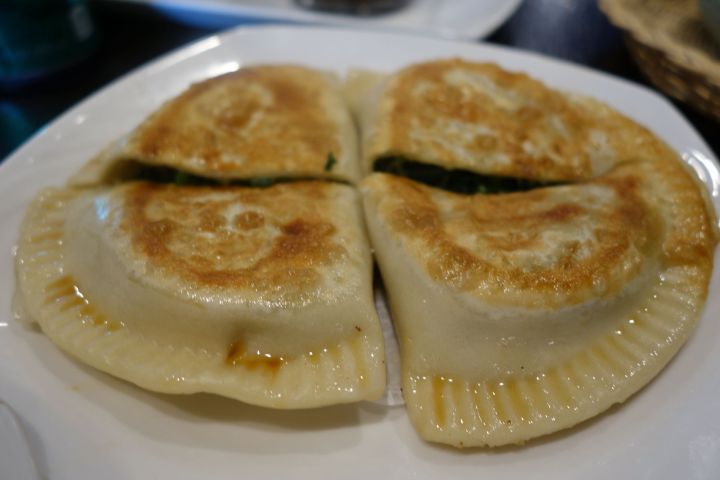 I ordered the Pan Fried Chives Dumplings for two reasons, first because it would provide a nice textural difference, and also because my sister and I both love the shrimp and chive dumplings we’ve had from other dim sum establishments.  The menu said they contained leek, egg, and small shrimp…but made no mention of chives.  Interesting, but I figured it was an oversight.  I didn’t open up one of these and look inside, because after the first bite I pretty much lost interest.  All I tasted was the oniony flavor of leek.  Interesting postscript, when the check came these were listed as Pan Fried Leek Dumplings.  Of course, that might sound just fine to you, but the consensus at our table was that these were the worst item, not only the only one that was universally disliked but the only one that was disliked at all, really. 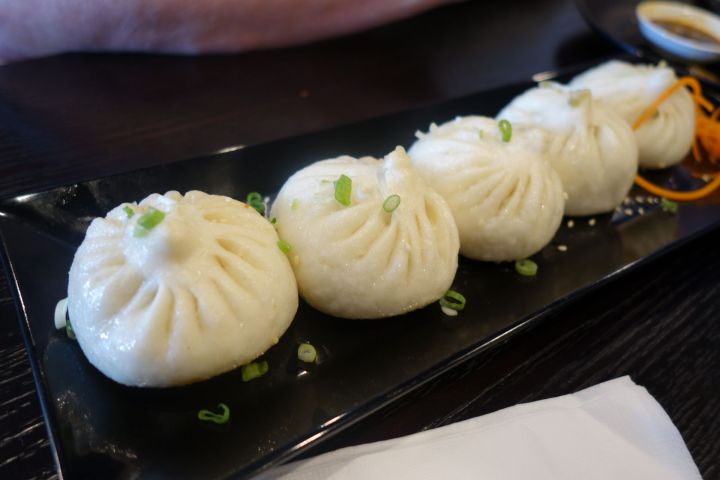 One thing Dough Zone has that Din Tai Fung has for some reason not included in their menu is the delightful cousin of the traditional soup dumpling, sheng jian bao (listed on their menu as Jian Buns).  You get half as many because they’re substantially bigger and with a much thicker skin, which is needed because the bottoms are fried potsticker style prior to their trip to the steamer.  The trade of delicacy for heartiness is definitely worthwhile in my opinion, no better or worse but simply different.  The thing to take away here is that whether you want small dumplings with thin skins, larger dumplings with thicker skins, or big dumplings wrapped in bread, the other components are essentially the same.  Just pick the wrapper that’s right for you.

So there you have it.  There are other things on the menu as well, but for me it was all about the dumplings, especially on the first visit.  There’s really nothing more to say than if you’re in the area, get your ass to Dough Zone.