I love seafood. Have for as long as I can remember. As soon as I outgrew the Happy Meals at McDonald’s, I moved straight on to the Filet-O-Fish. When I started paying my own way at Chinese restaurants, I quickly moved on from pork fried rice to the more expensive shrimp variety. When I finally have to leave the Treasure Valley to save what little remains of my sanity, there’s a damn good chance I’ll end up at the coast, and one of the reasons why is the access to fresh seafood. So, chain or not, I was excited to see a new seafood joint preparing to open mere minutes away from my mother’s house, and we made a beeline there just as soon as the “coming soon” signs came down.

First things first, the parking situation at Meridian’s new Hook & Reel location is a little odd. If you approach from the South, there’s a nicely situated parking lot right in front of the door. The problem is, you can’t go in that door. From the North, the nearest parking is in a lot next to a strip mall, and you’ll be hiking over or around the usual parking lot beautification crap (curbs, dirt, hedges, wood chips, etc.) to get to the front door.

Once in that door, you’ll be greeted by a not-quite life-sized statue of not-quite Jack Sparrow (somewhere, an attorney for Disney is probably wondering if it’s worth his time). This is the warning that you’re about to enter a theme eatery. I immediately expected lots of nautical bric-à-brac and a lot of televisions playing the day’s sporting events without sound over the bar.

Yup. Now I’ve been to cheesy theme restaurants all over this country (and some in Canada). I make an annual pilgramage to Red Lobster during their Endless Shrimp promotion. I’ve braved Outback Steakhouse, survived Chili’s, actually enjoyed multiple incursions into Bennigan’s, Fuddruckers, and even Cracker Barrel. I’ve been to TGI Fridays in NY during happy hour and lived to tell the tale. I’ve eaten things you people wouldn’t believe. Giant BLTs in the Hard Rock Cafe off the main drag in Niagara Falls. I watched cleveage glisten in the dim lights near the bar at Hooters. All those meals will be lost in time, like condiment packets in a take-out bag. Time to dine.

Wait, what? Sorry, got a little off course there. RIP Rutger Hauer. Anyway, soft opening plus not much promotion and off-peak time equals immediate seating. This is a Cajun-inspired eatery, which means paper on the tables, bibs, individually-packaged wet wipes…

…and one of the only instances where a restaurant giving you a waste bucket is a good thing. One thing I’ll say for this place, they have an assload of options, everything from sandwiches to baksets to single protein selections to make your own combos. There’s even a single pasta dish. We were given a basket of shrimp chips to start. Unexpected, but nice!

While we juggled the possibilities, I ordered an appetizer, because how the hell could I resist french fries covered in crab?

I’m used to (and more or less fine with) overpaying when it comes to seafood dishes in our landlocked little desert, so I didn’t blink at the $8 price tag on the Crabmeat Fries. Granted, it’s not a huge portion of crab, but it tasted good and that’s all that mattered to me. The thing that took me a minute to get past was the sauce. There’s no real description given on the menu, and what I assumed was cheese when I first saw the item turned out to actually be a somewhat sweet cream sauce. I honestly didn’t like it at first, but it bothered me less as I continued to eat it, and we left the basket as clean as you can leave one that’s paper-lined.

On to entrees. We both opted for the Make Your Own Seafood Combo. You choose two or more proteins, everything from $6 a piece blue crabs (when in season) to $6 for a half pound of crawfish. Then you pick a seasoning and a spice level, and the whole thing arives in a bag with corn and potatoes.

And it looks a little something like that. Mom opted for shrimp (heads off, $10.50 for a half pound) and a lobster tail ($16 for a six-ouncer). Your not-so-humble narrator also picked a lobster tail, along with non-headless shrimp ($9 per half pound) and scallops ($13.50 for a half pound). Of course all of this is market price and subject to change, so don’t blame me if it’s different by the time you read this. Suffice it to say it’s not a good place for a cheap snack. Mom isn’t big on spicy food and I just wanted something that would compliment the seafood and let it shine through, so we both went the garlic butter with no added heat route.

That’s my lobster tail in the back. Hi, little guy! The good news is that the there was plenty of food here to fill me up. The bad news is that the lobster was overcooked and that in a tail that small, the shell makes up a fair amount of the weight. The scallops were sliced, not what I expected but I’m sure it has something to do with getting all this different stuff to cook together coherently. Anyway, they were fine. The corn and potatoes were, you know, filler. The star of the dish was the shrimp, which were a decent size and perfectly cooked. And yes, I sucked the heads, much to Mommy’s disgust. It didn’t help matters when I had to explain to her why my sauce was a darker color than hers, either. As to the sauce…eh. It was definitely garlicky, but lacked any real butter flavor. Granted I didn’t expect it to be anything like, say, Red Lobster’s shrimp scampi. Butter that prevalent in an amount such as this would be nauseating, after all, but I would think there has to be a happy in-between. All in all, when you factor in the price, flavor, and preparation, we both felt it was more than okay but would stop just shy of calling it truly good.

I was still going through my existential blogging crisis at the time, so I had a chance at a second visit a few weeks later, and just a few days ago. I was taking myself out for a date night because damnit, I’m worth it. First, a trip to Edwards to use my Regal Unlimited membership (which I love, fuck you MoviePass) to finally see Once Upon a Time… In Hollywood. Quick aside on that: I love Tarantino’s movies. Maybe you don’t, but you have to admit the guy has an eye and everything he shoots literally drips with atmosphere. I will admit he does lean to hyper-stylization at times. And yeah, I’m one of the people who got pissed off about the Bruce Lee thing. Still, I loved the movie, and the last fifteen minutes are some of the most batshit insane that I’ve ever had the privilege of seeing on the big screen. I can only hope there’s a convenient chapter stop there once the blu-ray (or 4K, please let it be 4K!) is released.

Moving on. I was on a high after the flick, and wanted to treat myself to a moderately decadent dinner. I’m think I’m worth more than just moderately decadent, true, but no need to be gaudy for a dinner-and-a-movie scenario. This wasn’t a first date, after all. I figured I’d try the opposite end of the spectrum this time: a take-out basket. Due to some recent dental work, I have to avoid “dense” foods for a while, but I figured I could handle crab cakes. And that’s how I justified the $19 price tag. I called in my order en route, and twenty minutes later I was tucking in under the shade of a nice tree in the parking lot so I could enjoy my meal while it was still fresh and hot. Does it count as al fresco if you’re eating in your car? 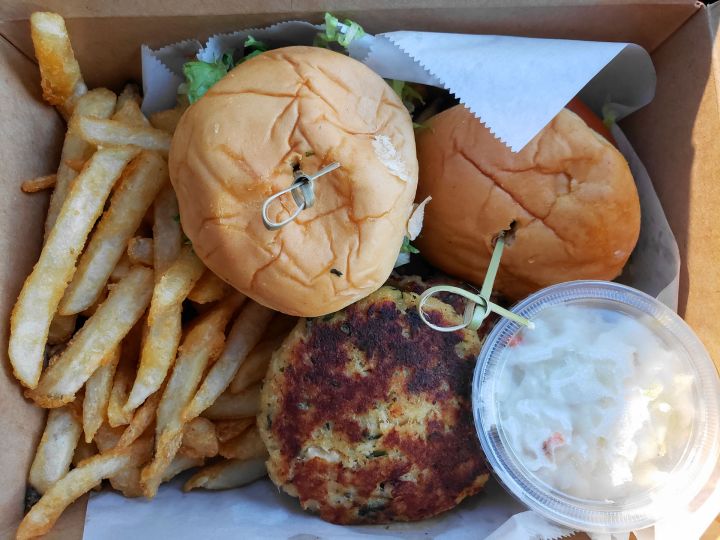 I was a little confused when I opened the box because it looked like I got some kind of sliders in addition to the crab cakes, but it turns out it was just the fixings for sliders in case you wanted to go that route (once again, no mention of this on the menu), with picks holding together buns, tomato, and shredded lettuce. The fries were were the same as the ones in my appetizer on my previous visit, they’re decent and have a little crispy batter on them. I actually really enjoyed the slaw, which had just a little heat to it. The crab cakes, not so much. First, they were even darker on the bottom, which gave them a slightly charred flavor. Personally, I like a little char on a burger or hot dog quite a bit, but not so much on a crab cake. Once you got past the crusty bits though…how to describe it? My first thought was that they were like a bland stuffing that was left just a little too wet and had a little crab mixed in, but that doesn’t exactly capture it. These things were practically mush, like if you were to chew all the ingredients up like a mama bird, spit them into a pan so hot that it scorched the outside before the excess moisture could be cooked away, and smashed it down with a spatula. They fell apart at the slightest prodding, and when I decided to try the slider variant on the second one, I had to shovel it onto the bun a bit at a time because the crab cake just disintegrated when I tried to pick it up. The blandness of the binder, and there was a lot of it, did allow the flavor of the crab to come through, but that wasn’t necessarily a good thing. I fully admit my palate isn’t refined enough to tell tinned crab from crab that isn’t exactly at peak freshness, especially in such small amounts in a mix, but I’m pretty sure it was one or the other. It had a bit of a fishy taste, and not the good kind. Plus, no lumps or anything, just tiny threads mixed throughout the breading. I’ve eaten crab cakes from upstate New York to Louisiana to the Oregon Coast, and I can say without the slightest doubt that these were the worst I’ve ever had.

Which makes the inevitable answer to the “Would I return?” kind of surprising, because I probably would at some point. There aren’t a lot of seafood options around here, and nobody else is doing them quite this way (talking about the higher-end options, not the crab cakes obviously), especially in my area. I think I’d like some more of those shrimp just fine, maybe with the Cajun or Old Bay seasonings this time. If you want to check it out, I’d say stick with the whole seafoods, do the math in your head as you go along so the cost doesn’t get away from you, don’t set your expectations too high, and you might just enjoy yourself. Sometimes with a place like this (and in a place like this), good is good enough, especially when convenience is factored in. Yes, of course I would have preferred if they had aimed a little higher, but what can I say? It is what it is.