So you might not be aware of this, I certainly wasn’t until an acquaintance tagged me in a Facebook post, but we’re currently in the middle of Refugee Restaurant Week. Four eateries (Grit American Cuisine in Eagle, Grit 2C in Caldwell, The STIL in Boise, and of course Diablo & Sons because why the hell else would I be bringing it up now) currently have guest chefs from various parts of the world who have created dishes inspired by their home countries. I really only had time to hit one before it’s over, so I chose Diablo & Sons because they landed Ethiopian chef Belaynesh Tesfamariam and I REALLY dig Ethiopian flavors.

Of course it didn’t hurt that I’ve been wanting to check out Diablo & Sons for a while. I have to admit I was immediately taken in by the fact that their welcome sign was a play on a line from Dante’s Inferno, and it might be kind of geeky and pathetic to admit such a thing would make me more interested in a restaurant, but what can I say? I’m easily amused sometimes. I made my way inside where the cheesy vibes continued. Lots of dark wood, chandeliers, cute bar, and wraparound windows letting in precious sunlight that would make my pictures turn out superbly. That is, the pictures WOULD have turned out superbly had I been seated in the main dining area…

…which, of course, was not the case. Not sure why, since the dining room was only half full and there was plenty of bar seating. I know that some places like to tuck solo diners out of sight where we won’t depress the other customers, but in a saloon I’d think that a little depression would improve alcohol sales. Maybe it was my kinda deranged longshoreman aesthetic? Whatever the reason, the room where I was seated is off the main dining area, and my server referred to it by a name which I honestly can’t remember. It has one chandelier set in the high ceiling and flanked by hanging speakers so I was able to fully “enjoy” the folksy/country type music that played all throughout my meal (though to be fair there’s no escaping that, it also plays in the main room and even on the outside patio). There are other lights in the walls set lower down, but they’re very yellow and have the lovely effect of making any food pictures look like they were taken in a Depression-era hospital room.

The decor is…let’s just call it “busy”. There are ornate mirrors of various sizes scattered about, which are surrounded by a metric fuckton of artistic renderings of rabbits. Maybe there were one or two other subjects, I don’t know. I didn’t inspect them all. All I saw was rabits. Lots and lots of rabbits. On one side, where I sat, there are a number of wooden tables with black (leather?) chairs that you can’t really sit fully upright in without abandoning back support. 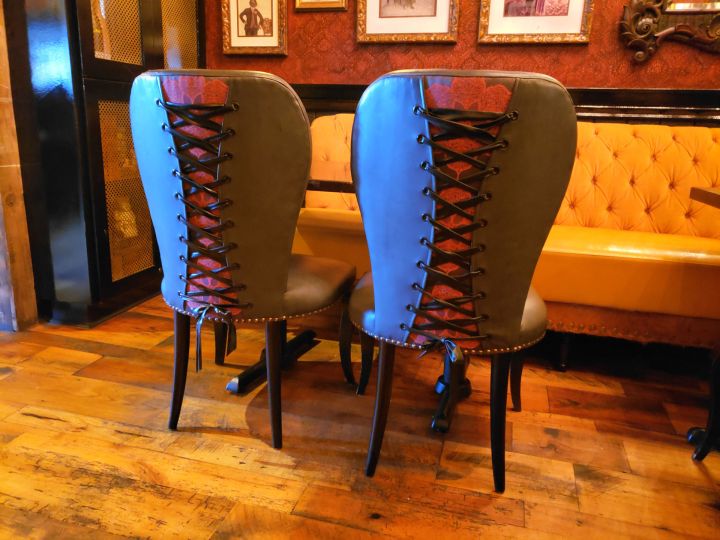 The other wall is lined by a looong upholstered booth seat, in front of which are several more wooden tables, and on the other side of which are what I can only describe as corset chairs. I was tempted by those, not for any kinky reason but because they looked much more comfortable, but as a solo diner my little two top was much more sensible. I’ve been trying to figure out how I should describe this room to people who haven’t seen pictures of it, and the best I can come up with is this: imagine what the end result would be if Lewis Carroll were asked to design a sitting room for a brothel. It’s not perfect, but I think it gets the point across. 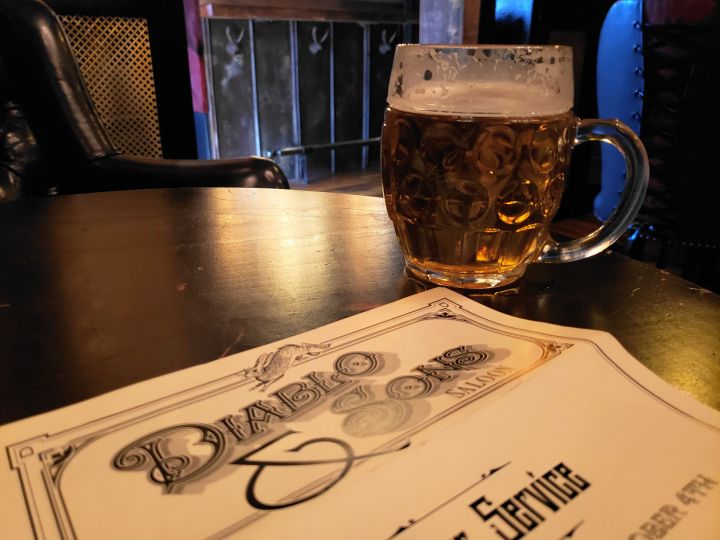 Moving on. Diablo & Sons bills themselves as a “lager & taco” saloon. They do have a full bar, appetizers, salads, entrées, other styles of beers and ciders, and even brunch, but the focus is definitely on lagers and tacos. I’m primarily a cider guy, but lagers are my favorite kind of beer and holy hell do they have a lot of lagers to choose from. I opted to go seasonal and ordered a half liter of the Oktoberfestbier from Hofbräu, which came in an adorable mug and was pretty tasty.

As for food, I started with one of the Refugee Restaurant Week special dishes, the Misar Salat. It’s a yummy salad consisting of brown lentils, red onion, tomato, bell pepper, ginger, lemon, and olive oil. I freaking love me some lentils, and the combination of those and the flavors used resulted in a dish that was substantial but still got my appetite going at the same time. It’s a rare and wonderful combination, but it can also be a little dangerous. 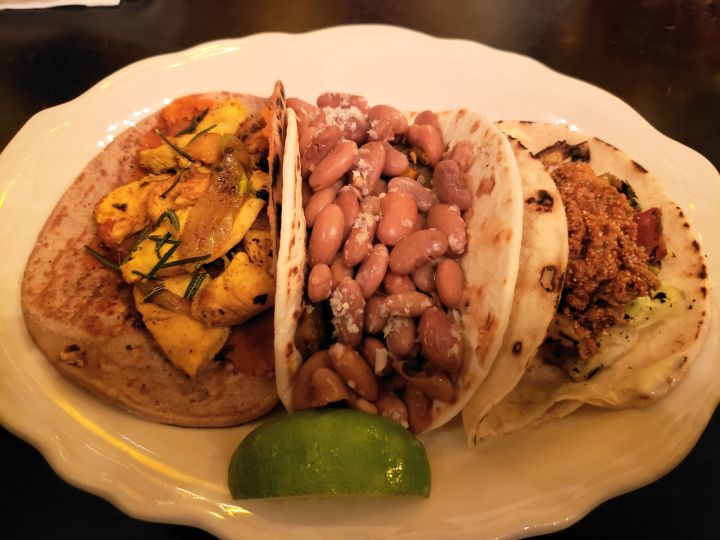 Especially if your meal consists mostly of à la carte tacos at $3.75 a pop. Three of them sit comfortably to a plate without crowding things up too much, so that’s what I ordered. Left to right, we start with the other special item of the week: the Doro Tibs Taco. That one has seared free-range chicken, bell pepper, fried rosemary, what I’m pretty sure was some grilled onion even though it wasn’t in the menu description, and a berbere lentil spread in a teff tortilla. Very tasty (and that’s coming from someone who doesn’t really care for chicken), plus the tortilla was super interesting. Teff is the grain used to make that amazing soft and slightly sour injera bread you get at Ethiopian restaurants, but they managed to make a tortilla out of it that was every bit as sturdy as their standard ones. Well done!

Next we have the Fiasco Bean, which is a whole lot of pinto beans with roasted green chiles and dry jack cheese. Good for filler thanks to the huge serving of pintos, but those were also the only thing I could taste. A squeeze of lime and a liberal amount of green Tabasco helped a bit, and it’s nice that it was a buck less than the other tacos, but it’s still nothing I’d ever order again. As a quick aside, considering how much effort they put into their menu and the fact that they’re the kind of joint that lists their purveyors on the menu, it was a little surprising that the hot sauce selection consisted of green Tabasco, Cholula, and Crystal. This is a prime opportunity for some local producer of hot sauces to enter into a mutually beneficial relationship with a local eatery, so someone should get on that.

Last, but certainly not least, we come to the most interestingly-named item on the taco menu: the Angels on Horseback. Don’t ask me. Anyway, it’s comprised of bacon, charred cabbage, lemon chile mayo, and unfortunately only one amazingly good fried oyster. Like so amazingly good that were it not for the breading protecting it, I’m pretty sure the oyster would have just melted on my tongue like a snowflake. I did hit it with a little spice halfway through (Crystal this time), but just to switch things up a bit. It was so good that I’m already trying to figure out when I can make it back for brunch, since they do a Hangtown Fry during those hours. Not sure how many oysters that gets you, but it has to be more than one, right? They used to do breakfast tacos as well, but despite them being on the website menu they’ve apparently stopped serving them recently. Too bad, no blood sausage for Track. Sigh. I’ll probably have to go back for a non-taco dinner at some point as well thanks to my server, because she was really selling the hell out of the ribs.

I suppose I’ve already answered the “would I return” question, which might be confusing given what I’ve said about the decor and the music, but I kinda love weird, cheesy stuff like that. Easily amused, remember?