Skip to content
After many times driving by, I finally hit this place yesterday.  It’s located next to the Chevron on Curtis, just north of Franklin in Boise, and it’s the first food truck that ever gave me a menu.  Though why one is needed when there are only four menu items, I don’t know.  Advertising, maybe? 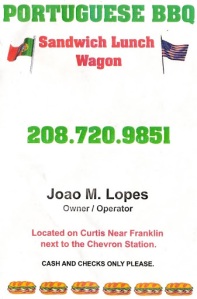 The Portuguese burrito is obviously the way to go if you’re being thrifty, but the sandwiches are the standard, which is why they come with chips and soda.  Literally.  You get a single-serving bag of plain Lay’s chips and the choice of Pepsi or Diet Pepsi.  That and the cook’s accent reminded me sharply of the Olympia Restaurant sketch from the golden age of SNL

.
http://www.hulu.com/embed/8l5wNPrxjqWDF2OuqJDI2g
Mr. Lopes was pushing the chicken sandwich pretty hard (albeit pleasantly, and to be fair he had some cooking while I was there and it smelled wonderful), but I simply couldn’t justify going to a Portuguese eatery and not trying the sausage.  I went early in the afternoon when there were no other customers, and my food was ready only a few minutes later.

Now I’m a little cautious regarding spicy food (a “wimp”, as I believe my beloved once put it, and she is wicked smart), so there was some trepidation leading up to the first bite.  While it was indeed spicy, it was the good kind of well-flavored heat that builds slowly so that you’re almost done eating before you realize your mouth is on fire.  I don’t feel there’s any need to say anything about the chips except that they weren’t stale and the soda other than it wasn’t flat.  The bread, lettuce and tomato were fine, though the onions and peppers described in the menu must have been in that salsa-like condiment that was adding so much heat.  My main complaint is that the cheese (and every sandwich seemed to have it, though oddly it’s not mentioned on the menu) was cut and layered in such a way that the heat of the sausage wasn’t able to melt it.  As a result, it became kind of a softened but still solid mass.  I’m sure this is probably better on the steak and chicken sandwiches, but a little more heat from the grill would have benefited the whole greatly.  Still, one thing above all made this trip worthwhile…

See that?  That is a sausage, my friends.  Not the kind of safe, pink/peach, puréed and then mechanically-shaped concoction that sells as sausage in the local supermarket.  Look at all those oddly shaped and textured bits, co-mingling in delicious unison.  I have to admit that while my tastes tend toward Asian and Mediterranean cuisine, I’m a sucker for most anything in a sausage casing or on a stick.  I’m definitely dragging either my lady fair or my sister there soon to split one of the chicken sandwiches with me.  I could handle one by myself, but I might like to save a bit of room for the really good taco truck just a block up the street (more about that another time)…
View Larger Map