Obon Japan Nite – After a few years of false starts, I finally made it out to this.  I don’t know if people telling me about it had blown it out of  proportion or if I’d hyped it up a little in my own mind, but I have to admit that what I’d expected to be a relatively full-blown festival was actually more like a Buddhist church picnic.  I could go into a lot of details about the day, but it’s all about the food here.  Most everything was pretty reasonably priced and somewhat like what you’d expect home cooking to be if your mother was Japanese and had to feed an entire family reunion by herself.  The most interesting thing was the mafa chicken, which my research tells me is a dish that might have actually originated in Ontario.  While I was in town I spotted a Japanese restaurant and martini bar that features it on their menu, so a return trip might be in order…

Five Guys Burgers and Fries – For those of you not familiar with this place, their intention seems to be to kill you.  The small fry easily feeds two people, and the normal burger selection are all double meat sandwiches.  The “little” burgers have one patty.  That having been said, my lady fair and I both got a “little” burger and split a fry, and we were still stuffed.  At least the food is good!
Baguette Deli – I’m sure most people know about this place by now, it certainly gets enough write-ups in the local papers and blogs.  If you’re not aware, it’s a Vietnamese sandwich joint in the Fred Meyer Plaza on Orchard in Boise.  This is not only one of my favorite lunch spots, but one of my favorite eateries in town, period.  That having been said, I decided to forgo my usual BBQ Pork Thit nuong and try the House Special Dac biet.

I don’t know that much about Vietnamese food

, but apparently “dac biet” means every kind of meat they have.  I rarely say this, but there was too much pork on this sandwich for me.  Still good, but very heavy.  At least I can say I’ve tried head cheese now…

– Tried my first recipe from the cookbook (thanks again hon!), the ginger scallion noodles.  Partly because it seemed like the easiest, and a good place to start, and partly because I’m a total ginger fiend. 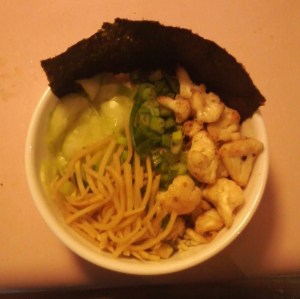 I used a tall, narrow bowl, but I can assure you there are indeed noodles underneath those bamboo shoots, cauliflower, chopped scallions, nori sheets and quick-pickled cucumbers.  Excellent stuff but it MURDERS your breath.  I think next time I might give the ginger and scallions a quick spin in the wok

and see if that helps.

Giacinto’s Italian Gourmet – This is a truck located at the northwest corner of Fairview and Maple Grove, if memory serves.

I was overwhelmed by the fact that I had a limited amount of time for lunch and couldn’t decide between the options, so in the end I totally wimped out and ordered the prosciutto and provolone sandwich. 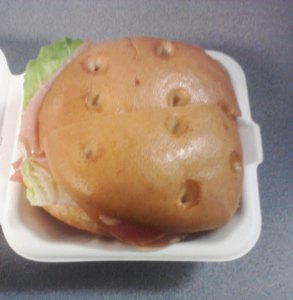 It was a good sandwich, but there wasn’t much special about it, the meat and cheese about what you’d expect.  The focaccia bread, on the other hand, was VERY good.  Nicely buttery and just enough garlic flavor.  I did severely regret not trying any of the more adventurous options, but a few things did stand out and will guarantee a return trip for me.  The guy running the truck is very nice, he cares about aesthetics (there’s a patio if you look closely at that first picture), and he cares about his food.  I ordered a cannoli to go with my sandwich, and he refused to serve me one.  He explained that the filling hadn’t turned out to his liking that day, and even went to far as to get it out of the cooler and show me WHY.  A lot of people would have just served it.  I hope he does well, because that kind of ethic is something we can use a lot more of, whether it’s in restaurant chefs or street food vendors.