It’s unfortunate but true that I spent a large portion of my life thinking that I hated Mexican food.  Like a lot of children, my experience was based on the offerings of places like Taco Bell, Taco Time, Taco John’s…you get the idea.  I did (and still do) dig the crispy burritos at Taco Time, but I knew they weren’t actually burritos (why don’t they just call them flautas? It’s closer to the truth).  Mexican food to me seemed to be about starch, grease, cheese, ground beef and sour cream.  Everything was either flavorless or flavored with exactly the same seasonings, and your only real options seemed to be too bland or too hot, and crunchy taco shells or flour tortillas.  I also spent must of the same portion of my life thinking I hated avocados because I also thought I hated guacamole (the first time I tried it there was mayo involved, and the combination was so hideous that it confused my palate).

saved (damned?) me in a lot of regards when it came to food.  I was making my way through life as a pseudo-vegetarian (no red meat, just poultry and seafood), and his books and travel programs not only showed me that I was closing myself off to a world of experiences, but that I was one of the unfortunate Americans with no real understanding of what constituted authentic Mexican cuisine.  Luckily, he also showed me the value of good street food, the two most recognizable forms of such being the hot dog cart and the taco truck.  Hot dog carts I’m still wary of, but I’ve learned to trust taco trucks implicitly, and they’re the easiest way to get “real” Mexican food.  The nature of what those people do necessitates speed and fresh ingredients.  A lot of times people are just grabbing a quick bite on their lunch break, and there’s no room in those trucks for a walk-in freezer.  I can think of half a dozen times throughout my life where I’ve felt ill after eating at a fast food joint, but never once have I felt off after a taco truck meal (unless I’m at Tacos Aguililla in Nampa, where I can’t seem to stop myself from polishing off an entire torta every time I go, but that is my own fault).

Lorena’s isn’t a truck, but the same principals apply.  It’s actually a little shack adjoining the Mister Car Wash on Fairview in Boise.

Before I go any further with this review, I must advise you that I am NOT an unbiased party when it comes to Lorena.  This woman is by far the nicest person working in the food service industry in the Treasure Valley, I’m convinced of it.  She doesn’t exude that “it’s a living” attitude that some in her position have or that “I can’t believe I have to serve food to a guy who can’t even pronounce what he’s ordering” vibe that I’ve experienced from one or two of the trucks around town.  I don’t drop by anywhere near as often as I should considering how close it is to my office, but I’m always greeted warmly without even so much as a playful rebuke for only showing up once every few months.  One reason is that she only accepts cash and I never really carry any on me, but the primary reason is that there are so many places still to try around here, and I never make it to any of my favorites as often as I’d like.  On to the menu…

If you’re familiar with the local taco trucks at all, you’ll notice that her selection is a little bigger and her prices a little higher than most.  All I can say is she has a prime location with a shaded patio area with matching iron tables and chairs and is on asphalt instead of gravel, so you’re paying a little premium for shade, less dust and decent patio furniture.  She also has a small breakfast menu and is open earlier than most.  It’s worth it either way, because unlike everyone else making the same claim, she really does have the best tacos in town.  On this particular day I was particularly peckish, so I ordered a carnitas torta and a carne asada taco.  I also picked up a pollo taco for my sister.

Bless Lorena, it must have never occurred to her that someone ordering a sandwich that size would want a taco on top of it.  We separated the orders and, with the addition of a glass bottle of Mexican Coca-Cola (don’t even get me started on how much better soda in glass bottles is), my lunch was complete. 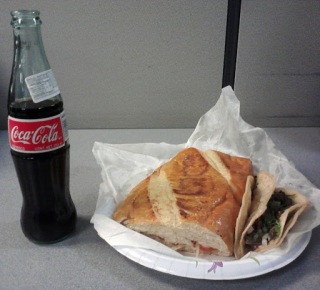 My sister described her chicken taco as “yummy”.  My asada taco was as good as ever.  I should warn you here that Lorena tends to adhere to the old European rule of “fat equals flavor”.  To that end, she gives a quick fry to her tortillas before putting the tacos together.  It definitely improves the texture and taste, but it also makes them a little oily.  Still, they’re delicious and I don’t get to stop by too often, so I don’t sweat it.  The steak is marinated very well, to the point where juices are going to be dripping from, if not just plain shooting out of, your taco as you eat it.  And that’s before you’ve even had the chance to add a sauce!

The torta I didn’t dig as much.  I hadn’t gotten one since my first trip to Lorena’s and I couldn’t remember why, especially since they’re my favorite thing to get from the trucks.  It boils down to a matter of personal preference: I don’t like the bread.  Pretty much everyone else in town uses the telera roll, which is a little like a giant hamburger bun.  Lorena uses something more like French bread (bollilo?), which is dense and has a very chewy outside.  And of course, she gives the bread a little grill time too, which results in it being a little on the oily side as well.  The combination of the oil, the density of the bread, the richness of the fillings (beans, avocado, cheese, onion, lettuce, tomato, fried pork, etc.) and the just plain overwhelming size of the sandwich…it’s just too much for me.  Still, there are plenty of places to get a torta in town, and Lorena has many other offerings to choose from (amongst which are the aforementioned best tacos in town).  If you like Mexican truck/street food you should definitely check out Lorena’s, and if you’ve never experienced it, this is a tremendous place to start.