I’ve reviewed a lot of taco trucks on this blog, and as much as I love some of the sit-down Mexican restaurants in town, for the most part my heart is with the street food version of Mexican cuisine.  That having been said, there are a lot of advantages to an actual restaurant.  Atmosphere, alcohol, a roof…oh, and I suppose a much more diverse menu selection due to the supplies and implements available.  In the great void between taco truck and traditional restaurant, you’ll find Los Beto’s. 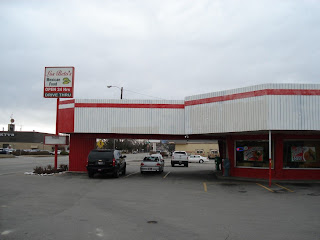 I’m going prematurely senile in certain regards, but I’m pretty sure that the Los Beto’s on Fairview was the first one, so that’s the one I decided to review.  Despite my love for traditional Mexican fare, I find I’m happier if I avoid it at Los Beto’s.  My beloved tortas, for example, I can’t get at Los Beto’s because I can’t stand their guacamole, which has an almost whipped texture.  I like my guac dense and chunky.  In all honesty, I think Los Beto’s is best suited to the after-bar and stoner crowd.  First of all, they’re open 24 hours.  Secondly, the portions are ungodly huge.  On my most recent visit I ordered two things.  The first was a carnitas taco.

This is a standard taco at Los Beto’s, and it requires its own take-out box.  Where most trucks and the like will give you a little three or four bite wonder, a Los Beto’s taco is bigger than a standard can of soda.  Unlike the street version where you’re given onion, cilantro and perhaps some salsa, here you’re given a generous mound of pico de gallo, and unfortunately that unsettling guacamole.  I really must remember to ask them to hold it next time, or perhaps ask if they can just put some regular avocado in there.  Either way, I love pico de gallo and the meat, although not the shredded variety I prefer, is juicy, full of flavor and harbors no nasty surprises.  As tempted as I was to finish it, I knew I still had a big task in front of me.  The taco was more for comparison’s sake, but the next item shows how different Los Beto’s really is.

Before I get into talking about the fish burrito (yes, you read it right), let me just say how very tasty the tortillas are at Los Beto’s.  And it doesn’t matter if you’re getting a breakfast burrito at the crack of dawn or snagging a chile relleno burrito after work (both of which I’ve had and can vouch for), the tortillas are always fresh, chewy, and perfectly grilled.  And they’re freaking huge.  If you’re not feeling self-destructively gluttonous, you can easily stretch one Los Beto’s burrito into two meals, but I’ve seen people who are hitting the proverbial wall dump their burrito filling so they could concentrate exclusively on finishing the tortilla.  Moving on….

The Los Beto’s fish burrito is a little odd.  First of all, while there definitely is fish involved, it’s been battered and fried and the menu makes no mention of its pedigree.  It tastes good, but that’s all I can vouch for.  In addition, you get lettuce, pico de gallo and tartar sauce.  Yes, pico de gallo mixed with tartar sauce.  It’s an idea that never would have occurred to me (I’m more or less convinced that no sober person invented this dish), but I’m glad that it occurred to someone because it’s damn good so long as the fish isn’t overcooked.  I’d go so far as to say that when they really do it right, this is a delicious dish.  Trust me, I’ve craved and contemplated getting them on many a late night, and actually done it once or twice.  And I’ve only given a few examples of their gut-bomb burritos, but there are many more to choose from.  Keep it in mind the next time you’re headed home from the bar and need to wolf down an alcohol sponge.