One of the ways that traveling (even in the limited amounts that I’ve done) gets you into trouble is in the way it educates you about food.  For example, a lot of what gets sold around here as Philly Cheesesteaks bear little to no resemblence to the real thing.  Does it make them bad sandwiches?  No, but I just can’t recognize them as Phillys.  New York style pizza is another example.  Granted, there aren’t many people in Boise claiming to serving it, but most of them have disappointed me (and in one or two cases, I’d go so far as to say it was insulting).  As someone who lived in New York for two years and ate pizza everywhere from Queens to Buffalo, I have to say that the closest thing I’ve found to true New York style pizza here is Guido’s. 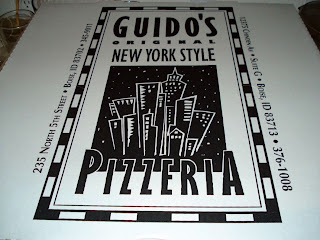 I’ve been to Guido’s original location downtown for slices before, but most of the time (and especially when I want to buy a whole pie) I get my fix at their Chinden Boulevard location.  From Meridian, you just zip down Eagle Road, turn right at Chinden and keep your eyes peeled for the strip mall on your right.  How good is Guido’s?  Good enough that I’m willing to put up with the fact that they don’t take credit or debit cards.

Guido’s has salads, sausage rolls and strombolis, but take the somewhat minimalist New York approach to pizza.  The main part of their menu consists of cheese pizza, cheese pizza with fresh basil, and a more involved white pie (with olive oil, sun dried tomatoes, fresh basil, Parmesan, and mozzarella).  Of course they have other toppings available for $1.50 each, but as far as I’m concerned it’s difficult to beat the cheese and basil.  However, the last time I went there was more than just my concern involved.  There were children to think of, so we compromised on a half cheese and basil, half pepperoni.  They were still finishing it up when I arrived, and the special of the day caught my eye.  It was a variation on their white pie, but with green peppers.  I snagged a slice to try, and one for my mother as well since she doesn’t care much for red sauce.  Luckily, Guido’s realizes that the cheese and crust are every bit as important as the sauce, and doesn’t overdue it on any of them.

In all honesty, red sauce isn’t my favorite either.  When I have the option, I usually choose pesto sauce.  Red would be my second choice, but I have to admit that a simple olive oil glaze like on Guido’s white pie is very nice on occasion.  And I of course love NY style slices because you fold them over and basically make a sandwich out of them (have I mentioned that I’m something of a sandwich freak?).  A couple of bucks for a slice that big seems very reasonable, to me at least.  I also love that Guido’s uses restraint when adding their toppings.  Chicago style pizza is one thing, but in my opinion NY style doesn’t need a pile of stuff on top of it.

I paid as soon as I got there, so the second my pizza was done I rushed to the car and got home as fast as I could, without breaking any traffic laws of course.  Despite it being a winter night, there was still heat coming off the box when I got it home.  I don’t think the kids had ever had this style of pizza before, and the toddler in particular wasn’t too keen on the idea of folding pizza.  The tween, on the other hand, felt the crust was a little overdone.  I have to admit that it was a little darker than I like, but considering the fact that the last time I got “NY style pizza” the crust was black and inedible, I was feeling pretty forgiving.  After all, this was the darkest I’d ever seen their crust, and the pizza was still making me happy.  I mean who cares about that when you’ve got melted cheese and fresh basil to contend with?

I know people who always go to the same pizza place.  Quite a few of them actually.  Me, I just like pizza too much to restrict myself to any one kind.  Sometimes I want a thicker crust, more toppings, stranger sauces and stronger cheese.  But sometimes I want that NY style, and since it will likely be quite some time before I return to New York, I’ll be getting it at Guido’s.