I’ve been going through a bit of a burger phase lately, and an odd one at that.  Basically I’ve been craving burgers constantly, and I’ve been going to lots of places to get them, but getting something a little unusual each time.  A strange cheese here, a different meat there, maybe a fried egg, unusual sauce, or some pork belly.  I’ve had lots of good burgers, but they were doing nothing to dissuade my craving.  It’s like I was a bottomless burger pit.  One night recently, my housemate suggested that what I really needed was a good, old-fashioned, all-American style burger, and even though I should have known it myself this struck me as a revelation.

Problem was, the revolution came late on a weekday evening when pretty much everything but fast food joints were closed.  As a frenzy built in me, my savior contributed her second brilliant thought of the night: what about Five Guys?  We’d both been there before and quite enjoyed it, but I didn’t want to get my hopes up.  It was, as I said, a weekday evening in Meridian, and Five Guys doesn’t have a drive-through that’s open late.  A quick visit to their website yielded two important bits of information: Five Guys is open until 10 PM seven nights a week, and they have online ordering.  At this point, the decision was easy. 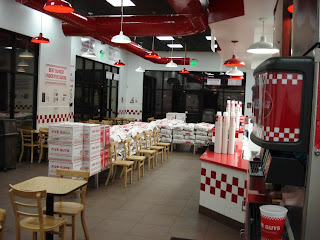 Let me clarify something here, lest there be any doubt.  I LOVE online ordering.  I can be very specific about what I want at times, even if it’s something as deceptively simple as a fast food burger.  And believe it or not, I can get kind of shy standing in front of some guy who doesn’t get paid nearly enough to listen to my list of specifications.  But if it’s the computer telling them what to do, I don’t get so self-conscious.  Being able to customize not only what I wanted but how much of it, I totally took advantage of the situation.  Little Bacon Cheeseburger (remember kiddies, “little” at Five Guys means you only want a single patty, it’s their standard burgers that come with two).  Ketchup, lettuce and onion.  So far so good.  Now the fun part: extra cheese, extra tomato, and extra pickles.  Regular fries (remember again, the regular fries are easily enough for two people) and drink.  I submitted my order and a message popped up telling me that my food would be ready in ten minutes.  So off to Eagle Road I dashed, and my burger was waiting for me when I got there.  I was given an empty drink cup so that I could serve myself while they gave my fries a hot oil bath, something they apparently wait to do until you show up so they can be as fresh as possible.  About three minutes later, I was in my car and on the way home, a paper bag with grease bleeding through on the seat beside me.

﻿
Once home, I wasted no time dumping everything out onto a plate.  Other than the cheese having re-solidified a bit due to the cold weather outside, everything looked and smelled delicious.

I fear that this is something I’m going to end up being associated with, but once again I wasn’t impressed with my fries.  My biggest complaint was that so much skin had been left on them that it tasted like a baked potato.  My housemate dug them though, so maybe I’m just really hard to please with fries?  Five Guys has never been my favorite for fries, but now and then I crave them and they are usually better than this.

I turned away from the fries pretty quickly and tore into the burger.  To be completely honest, it didn’t completely satisfy me, since what I was craving was a big, thick, juicy, medium-cooked burger with real cheese on it, but this was definitely a step in the right direction.  The extra cheese and pickles were a terrific addition.  I need to get back there again sometime soon and do so early enough that I can stay at the restaurant and eat and enjoy them at the peak of their juiciness.  In the meantime, does anybody know where the hell to get a burger like I described above?