It’s just after 5:30 AM on a Saturday morning when I feel someone climb into my bed.  I turn over and force my eyes open to find myself face to face with my housemate, who is bright-eyed and bushy-tailed as the saying goes.  I had slept about three and a half hours, getting to bed late after finishing another write-up.  I’m so out of it that I’m getting more of the concepts of what she’s saying rather than the sentences as a whole, but she’s definitely talking about going out to breakfast.  When I had finally hit the sheets around 2 AM, I had briefly considered waking her up and dragging her to Solid so I could finally try their chicken and waffles, since the kids were spending the night with their grandparents.  In the end, I had decided against it because she’d only been asleep for about five hours and I value my life more than a waffle, with or without chicken.  I decided on a different tactic: I would set my alarm for six, make a run downtown to DK Donuts for, among other things, their bacon maple bar.  I’ve been wanting to see how it compares to its daddy over at Voodoo Doughnut in Portland.  And now this.  I’m a little perturbed.  It’s amazing how much difference another 30 minutes of sleep can make when you’re that exhausted.  Then she mentions Goldy’s, and suddenly I’m feeling much more awake. 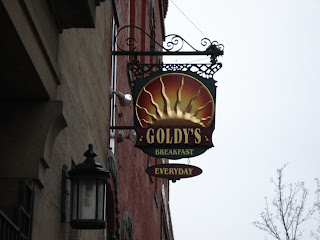 I’ve wanted to try Goldy’s for quite some time now.  They’ve been written up by everyone from Boise Weekly to Bon Appétit, and I’ve been wanting to go since I first heard about them.  But, as always seems to be the problem, there are just so many places to go that it can take a long time before I make it to any of them.  And to be honest, when I’ve just woken up I tend to favor places closer to home.  But on this occasion, I find myself standing outside Goldy’s at 6:30 AM (the time at which my breakfast buddy said they were to open), and I even did the driving!  People are milling about inside, and I can smell prep work going on, but there are no other people waiting to get in and the lights are still off.  Not sure what exactly is going on, but certain it is too early to call anyone to have them check the website to verify their opening time, we take a leisurely stroll down the Basque Block, around the corner onto Main Street where we discover a charming little business called LunchBOX, then back up to Capitol Boulevard where we find Goldy’s still closed.  At around 7 AM, a man sticks his head out the door and informed us that they don’t open until 7:30 AM, which is the norm for them on weekends.  I give my companion “the look”.  A light drizzle starts, so we decide to finish out the wait in the car, chatting lustfully about the coffee I so desperately need to finish getting into gear.

A few minutes before the correct opening time, we make our way back, only to find that now there IS a line.  No matter, there are not yet enough people to fill the place, so we still make the first round of seating.  Eventually the doors open, we make our way inside and are directed to the small balcony upstairs, a secondary dining section notable for its low ceiling, among other things.  So low, in fact, that I can’t stop marveling at it and unnerving my quasi-claustrophobic companion.  Eventually we distract ourselves with the menu and the dazzling array of condiments and sauces available.  A couple of steaming cups of Dawson Taylor coffee are ordered at the earliest available opportunity, cups which as the morning goes on will at no point be allowed to drop below half full, which is the kind of service that I find so beautiful that it could almost bring a tear to my eye.  Yeah, I can be emotional when I’ve just woken up.  Anyway, after giving a quick perusal to the entire menu, we both order the “Create Your Own Breakfast” combo.  The lady chooses the two egg combo (scrambled), with bacon from the meat column, Goldy’s Special Potatoes (red with their own special seasoned salt) with cheese, peppers and onions from the potatoes column, and sourdough toast from the bread column.

She doesn’t say much about the eggs, so I assume they’re just fairly standard scrambled eggs, which is good considering how many places I’ve been to who can find a way to screw them up.  She also seems content with the toast, and marvels at the interesting fruit spreads that are available.  The bacon is a little on the limp side, but it’s true enough that you often have to specify if you want it crispy, and at least the flavor is good.  The big winner on her plate is the “Special Potatoes”, basically Goldy’s version of home fries.  Those are just absolutely delicious, with great care taken to cook the peppers and onions correctly and a thick layer of real melted cheese covering everything.  Most importantly, they’re not overwhelmed with the seasoning, something a lot of restaurants with their own special seasoning blend are guilty of doing.

As for me, I choose the three egg omelet combo.  Goldy’s default omelet contains two fillers, but you can order additional for ninety-five cents each ($1.50 for avocado).  I decide it’s worth getting another item for my omelet.  All things in threes, right?  I choose asparagus, bacon, and Gruyere cheese.  I’ve always wanted to try asparagus in an omelet, and I want a cheese that has a good, distinct flavor that won’t completely mask the asparagus.  The bacon I choose because, well, it’s bacon.  Have you read any of my other posts?  Anyway, as my sides I choose the chicken/turkey pesto sausage from the meat column, corned beef hash from the potatoes column (I know, go figure), and a single blueberry pancake from the bread column.

﻿ This is an amazing plate of food.  My lucky streak of choosing better savory items than Ms. Golden Rule continues!  She did suggest ordering a side of Hollandaise since so many of their menu items feature it.  I try the omelet first without it, and it is everything I had fantasized it could be when I was deciding on the combination.  The asparagus is nice and thin, tender but not overcooked and with a good flavor to it.  I’m not as impressed with it once the Hollandaise is added though.  Granted, I don’t have a lot of experience with Hollandaise, but this is thick and mayo-heavy and I find myself wishing it was a bit thinner and stronger on the lemon flavor.  I try another bite to be certain, and then abandon the sauce.  Next is the sausage, an item that I will later wonder about whether it’s made specifically for Goldy’s or if it can be purchased elsewhere.  I love pesto, and I love using turkey as a protein in my own cooking because it’s healthier and absorbs flavors so well, and this sausage is a perfect example of both of those points.  The omelet is as good as I had hoped, and the sausage had rewarded my cautious optimism, but the thing that really blows me away about my meal is the corned beef hash.  Why this is on the “potatoes” section of the menu is a mystery to me, since the ratio of meat to potato in the dish is about 2 to 1, but the important thing is that I’ve never had a hash that was cooked better.  This is stripped down to the essentials: meat, taters, seasoning and nothing else.  And the meat…wow.  You know how in an order of hash the best part is the crispy bits?  This is nothing but crispy bits, every single morsel cooked perfectly so that there is a little crunch in every bite but none that is dried out or too chewy.  Whoever came up with this recipe must like theirs the exact same way that I do, the difference being that I’ve never even come close to making a batch that perfect myself.

The pancake, on the other hand, is just okay.  The flavor is good and I do love whipped butter, but the cake itself is a little on the dry side and completely absorbs my little cup of syrup like a sponge.  Lucky for me, I’m already pretty full at this point and just craving a little sweetness to balance out my meal.  I run out of room long before I reach the burnt part along one edge.

Aside from a dry pancake, some mayo-centric Hollandaise and a few pieces of floppy bacon (that, once again, still tasted good), everything ranges from good to wonderful.  As I stand up to put my jacket on, I can see people outside waiting for tables to open, and that Goldy’s is nice enough to put out a coffee dispenser for them.  It gets me thinking that I’ve seen a lot of restaurants open here, generate a little buzz and long lines of eager would-be patrons, and then sanity returns and they take their place alongside all the other eateries.  Obviously that’s not the case here.  Before we entered, a man remarked to us that he and the friend dining with him go to Goldy’s every single Saturday.  Few places could inspire that level of devotion in me.  As I’m contemplating all of this, my eyes shift to the kitchen, which I have a pretty good view of from the balcony.  The cook is frying up an order of sweet potato hash browns.  A couple of tables away, someone else is eating the malted waffle that caught my attention earlier while I was checking out the menu.  I might not become a “regular”, but I’m not really a regular anyplace, even the ones that are cheap, delicious and conveniently located.  There are just too many places I love and too many I’ve yet to try.  The one thing I know for certain?  I will be back to try the waffle and those hash browns.