I’ve loved Asian food for as long as I can remember.  As kids, while my siblings begged for McDonald’s for dinner, I usually asked to go to New China buffet.  I practiced over and over with disposable chopsticks, meticulously following the directions on the back of the packet to gain proficiency.  I had more late-night dinners at Twin Dragon during my high school years than I can recall.  Over the last decade or so, my interests have broken free from the confines of Americanized Chinese fare and branched out to other Asian cuisines, and one thing we’re surely not lacking in the Treasure Valley is Vietnamese restaurants (not like we’re lousy with them or anything, but there’s certainly more of them around than Korean or dim sum joints).

It’s hard to find a fan of Vietnamese food who doesn’t like pho.  It’s not my favorite Vietnamese dish, but I still adore it.and even if (as so many say) the pho around here don’t stand up against noodle joints abroad or in larger U.S. cities, most of the people I talk to still have a favorite local spot.  My personal preference is Pho Tam, but I’m certainly not above scarfing down a bowl at Baguette Deli, and I also have to reluctantly admit that I’ve yet to sample the wares of Pho 79 and Pho Nouveau.  Since they opened, Pho Bac has had a steadily growing fanbase, and has been recommended to me by several readers.  Personally, I’m amazed that a place with such a limited menu has lasted this long, but it led me to believe that they must be pretty good at what they do have.  So, after a year plus of driving past the place twice a day, five days a week, I finally decided to check them out. 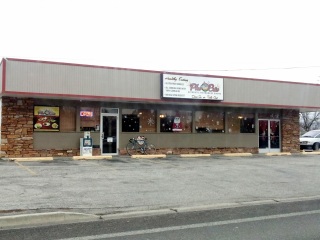 My favorite Vietnamese dish (so far) is bun cha gio thit nuong, a decidedly non-soupy mix of rice noodles, grilled pork, sliced egg rolls, and various garnishes and condiments, and since it’s my personal yardstick dish it’s pretty much always the first thing I order when trying a new place.  Several months ago, I stopped by Pho Bac for a to-go order.  Some remodelling had taken place since my last visit back when it was Chau’s, but the furniture and checkered flooring remained. 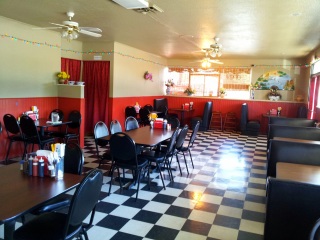 I didn’t have a lot of time to reflect because I had called in my order and it was ready when I arrived, so I just paid and headed back to the office to eat.

This was a decent take on the dish, but for me it just didn’t stand up to other options in town.  The egg rolls and pork weren’t quite as good as at other places around town, but the noodles, sauces and veggies were just fine.  It’s one of those things where I wouldn’t go out of my way to go back for it again, but if I was with someone who insisted on going there then at least there is something I knew I could eat.

Not having much to say about the place or the food either way made it hard to get excited about writing them up…so I didn’t.  Still, the recommendations kept coming, and after a fairly glowing review over at the Bald Gourmet’s blog, I figured maybe it was time to try the main event.  After all, Pho Bac has over a dozen pho options, ALL of which feature their beef broth (yes, even the tofu and seafood varieties).

Just before Christmas, I found myself cut loose from work early and decided to treat my mother to lunch.  The best thing about treating is of course that I get to choose the restaurant, and I chose Pho Bac.  Making our way past the window painting of eerie pseudo-anime Santa…

…we went inside and took a seat along the wall.  The first thing I noticed was a big black number on the wall next to every table, which I have to say didn’t give me a lot of confidence in the waitstaff.  Sure enough, when our server arrived she wasn’t particularly knowledgeable, responding to my inquiry about the lack of anything other than a beef base for the variety of noodle soups by saying that most vegetarians don’t seem to mind (note: this means they are NOT vegetarians).  We decided to play it safe and order standard pho.  To be honest I don’t recall exactly what Mom ordered, but since there was no option that incorporated steak, brisket and meatballs and I wanted all three, I offered to pay a little extra for a customized order.  As an afterthought, I tacked on an order of egg rolls so I could try them in their native environment.

The egg rolls were, once again, decent.  Not overly greasy but a little too heavy on the fungus for my taste, and the lettuce wasn’t cut in a way that facilitated easy wrapping and dipping in the supplied fish sauce.  I love cha gio and would eat these again if the opportunity presented itself, but much like the bun from my previous visit they’re not worth a special effort to return.

In researching Pho Bac before my second visit, I was surprised how divisive the comments I found around the web were.  Even the glowing review from the Bald Gourmet was based on his second visit; on his first he said that the broth seemed to have no star anise at all.  I had an idea what this might mean, and unfortunately, I was correct.

From the very first sip of broth, the flavor of star anise overwhelmed everything else in the dish, and suddenly the wide-ranging reviews made complete sense.  For several reviewers to say that the broth has no flavor and then to have my own bowl featuring one flavor so overwhelmingly, the only explanation is that the broth is inconsistent.  I kept dumping in hoisin, lime juice, hot sauce and fish sauce in different combinations, trying to balance out the flavors a bit, and I was already about halfway through the dish before I got it to a place where I could enjoy it.  The veggies, noodles and meatballs were very good, but the steak wasn’t sliced as thin as I like and the brisket was past well-done and came across as dry and chewy.

Those of you who have been reading my ramblings for any length of time have likely noticed that I don’t like writing negative reviews.  Well, not unless a place is absolutely terrible or has somehow grievously offended me.  I prefer to bring attention to places that I love, but in this case I’m just responding to quite a few requests for my opinion on an eatery.  In truth, I wouldn’t say Pho Bac is a bad place to grab a bite, especially since it seems that many people have very positive experiences there.  But consistency is important in the restaurant business, and if a customer falls in love with a dish then they want the same thing the same way every time they come back.  As for me, there are places I like better and places I’ve still yet to try.  Pho is a very subjective and customizable dish, so my advice is to do as I do: keep trying places until you find the one that works for you, and then support the hell out of it.