I don’t know exactly what time I woke up.  All I know is that everyone else was still asleep so, as the lone male in our merry band of traveling Idahoans, I jumped at the opportunity to be first to the shower.  Like everything else about the hotel, the shower worked ass-backwards, meaning that you had to turn the faucet the opposite of the labeled directions in order to achieve the desired effect.  The sink was even more interesting, in as much that it didn’t matter what you did with the faucet, the water was just going to be whatever temperature it felt like at the moment.  If you just let it run, it would go from cold to scalding and back again at random.  And don’t even get me started on the toilet that required three flushes to dispose of a single used tissue.  By the time I emerged, scrubbed fresh and ready to take on the day, my companions were stirring.  To my chagrin, my state of readiness got me nominated to go fetch coffee and breakfast for the others.  At Starbucks.  Even if I liked Starbucks, which I don’t particularly (gingerbread lattes aside), I just cannot see the sense of going to a different city and wasting time and money at a place I can visit any day of the week at home.  Still, I fancy myself as something of a gentleman from time to time, so off I went to fetch the various  pastries and beverages the ladies requested.

While they drank and munched and bathed, I bemoaned the fact that they had already gone through the complimentary coffee in the room by the time I returned, and the fact that the complimentary Wi-Fi was only marginally better than dial-up (does that even exist anymore?).  My plan had been to do sporadic posts during the trip when I had some time to kill, but with it taking twenty minutes or so to upload a single picture, I scrapped that idea pretty quickly.  Interestingly enough, the Sprint network is screaming fast in Seattle, so I used my phone for pretty much everything while I was there.

I had hoped that once everyone else was fully awake and put together, I could talk them into hitting the International District with me so I could take care of this dim sum craving that’s been tormenting me since my last trip to Portland two years ago.  Unfortunately they also had things they wanted to do that I wanted no part of, and with only a day and a half to go before we’d be back on the road, we decided to split up.  The womenfolk began the long trek to the Space Needle, and yours truly headed to Chinatown.

I decided to start my day at Uwajimaya, an Asian supermarket that I already love from my trips to Portland, but this would be my first visit to their flagship store.  While the Beaverton location is sizable, the Seattle branch is even bigger and is the cornerstone of a complex including a food court with a wide variety of eateries, a bookstore, and apartments that sadly I cannot afford.

I looked through their fresh goods… 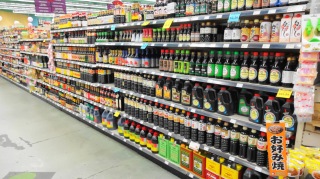 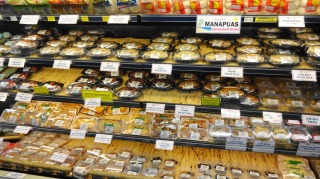 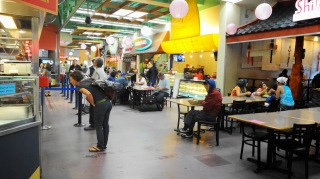 …and finally ended up at their food court, which features Uwajimaya’s deli and nine (!) other eateries offering everything from Korean and Hawaiian cuisine to pastries and burgers.  As much as I wanted to go on to a dim sum joint, the wall of smells that hit me when I turned the corner into the food court reminded me sharply that I hadn’t eaten yet, and I knew that I wouldn’t be able to take the legendary waits at the dumpling houses.  I made a circuit of the food court, twice, but of all the possibilities it was a glass case in the Uwajimaya deli section that kept drawing my gaze.

So yes, out of all of the available options, I ate at a grocery store deli.  For breakfast.  I went with the BBQ pork and roast pork combo plate.  And though I hadn’t had coffee yet, I decided a soft drink would pair better.

On the way through the line I snagged a couple of shu mai, my favorite dim sum item.  Though Uwajimaya fries theirs for some reason.  And a spring roll, because I have a serious addiction issue with them.  The spring roll actually wasn’t much different than the ones you’d get at a Whole Foods deli but taking shu mai, which is normally a steamed dumpling, and frying it definitely makes it stand out.  It’s not as good as the traditional method, but definitely better than I expected it to be.  It would definitely make an awesome snack food for watching kung fu or Godzilla flicks.

Considering that the meal was only $8.49, I was expecting a lot less food than I got.  Two respectable piles of pig chunks, a mound of sticky rice and a selection of steamed veggies awaited me under the lid of my take-away container.  Asian BBQ pork, which I think it’s safe to say almost everyone has tried served in cold, thin slices and dipped in hot mustard and sesame seeds, becomes an entirely other dish when hot and allowed to stand on its own.  But as tasty as that was, it was the roast pork that was the star of the group, with the crispy skin being held to the juicy meat by a creamy layer of melted fat.  Still, given the richness of the previous night’s meal, all this fatty pork was starting to weigh on me.  Even with the rice and veggies to break things up, I wasn’t able to finish all of it.  Luckily the reasonable price kept me from feeling too guilty about tossing it, since I had no intention of returning to the hotel for an hour or two and there wasn’t a fridge there anyway.

Hunger satisfied for the time being, I started making my way up and down the streets of the International District.  I’ve always had a fixation with Asian…well, pretty much everything.  I was positively giddy as I canvased the area, passing dozens of eateries, poking my head in herbalist and gift shops, snapping pictures of murals and decorations.  After a couple of hours, I decided to finally hit up a dim sum joint, even though I didn’t yet have much of an appetite.  The two generally regarded as being the best, Jade Garden and Harbor City Barbecue, are basically right across the street from one another, and even in the late hours of the morning the lines were still pretty heavy.  Worse than that was the fact that the restaurants were each diner-sized.  I had been spoiled by my experiences at Wong’s King in Portland, which has a huge dining room with high ceilings, and is the kind of place where a lone man could probably find a corner table and be off by himself.  I stood for ten minutes in line at Harbor City before deciding that I would likely be turned away all together or be crammed in an extra seat with a family or group, and that just made me too damn self-conscious.  Dejected, I took to wandering the streets again, still not particularly hungry but wanting a little something and hoping I could find an offering to engage my interest.  I passed by a pizza joint, a bubble tea spot, several bakeries and noodle houses, and somehow ended up back at Uwajimaya Village.  On one side of their complex, there is a standalone eatery called Samurai Noodle.  A cheesy name to be sure, but it was the line underneath the name that caught my attention: Seattle’s Best Ramen Shop.

Now I love ramen, but believe it or not I’d never had anything that could be described as even remotely authentic.  I started out as a kid with Smack and Top Ramen, and graduated to the better kinds like Sapporo Ichiban and Myojo as I got older, adding toppings so it more closely resembled the pictures on the front of the package.  But real ramen with handcrafted broth?  Never.  Excited enough that I stopped thinking about dim sum for a moment, I stuck my head inside.  There were only two customers, middle-aged Caucasian women talking loudly and making a mess of their shirts while they ate.  I saw two staff members, both also Caucasian and in their early 20’s.  I was retreating back to the sidewalk when one of the girls noticed me and asked if I was dining in or if I wanted my food to go.  Feeling somewhat trapped now, I said I’d be staying.  I sat down in a dimly lit corner, feeling my expectations lowering by the second.  The waitress brought me a menu and took my order for a Dr. Pepper (nothing says authentic Japanese like Coke products), sans straw because they were out.  As I perused the menu, a little hope began to return.  Even though I’d kind of had my fill of pig products at this point, I chose the Tonkotsu, thin wheat noodles in pork broth with black mushrooms and green onions, topped off with a slice of pork.  The waitress asked if I wanted the traditional fatty pork belly, or the leaner shoulder cut.  Grimacing inwardly, I said “traditional”.  Just to break it up, I asked to add on a poached egg, only to be told they were out of those as well.

When the bowl was set before me, I perked up instantly.  This definitely looked promising.  One taste of the broth and they had me.  It was silky, sumptuous, and thankfully nowhere near overly salty.  The noodles were good, left just a little firm, the pork falling-apart tender, the green onions added some nice flavor and the mushroom lent more texture than anything else, but it was that freaking broth.  I kept eating long after I hit the wall because I couldn’t bear the thought of leaving any of that porcine nectar behind.  To this very moment, nothing I had before or after this meal on that trip has haunted me as much.  I wish I had gotten a to-go cup for the drive back, I swear I would have drunk it like a beverage.

I waddled out of the restaurant surprised, happy and stuffed like the proverbial Christmas goose.  And I may have learned a lesson about judging a book by its cover.  Deciding I’d had enough for the time being, I texted my compatriots, who were just finishing up their skyline-gazing.  We decided to meet up back at the hotel and plot our next move, so off I went, thankful my next destination was relatively close and only slightly uphill.

Uwajimaya Deli
Food:  Grocery store deli, yes, but not like you’ll find anywhere else.  B-
Value:  Considering what a fast food “value meal” goes for, this is very reasonable.  A-
Service:  Not bad or good, really.  Sort of like a school lunch lady.  B-
Atmosphere:  Cafeteria all the way.  B-
Final Grade:  B

Samurai Noodle
Food:  I have no real basis for comparison, but it was freaking delicious.  A
Value:  $7.25 may sound like a lot for noodles and broth, but if as much work went into this as it seems, it’s totally worth it.  A
Service:  Friendly and helpful, without so much as a trace of kitsch or irony.  A
Atmosphere:  A nice hole-in-the-wall feel, no complaints here.  A
Final Grade:  A