You may have noticed that I don’t make it downtown much.  It’s not that I don’t want to (though there are things about it that annoy the hell out of me), but I just rarely have cause to be there.  I don’t work there, I don’t live there, and there generally isn’t much going on in the area that draws me down.  When I do go, it’s usually a multi-tasking trip.  Occasionally I’ll go to see a play or catch a movie at The Flicks, maybe do a little shopping at Whole Foods or the Co-op, and of course I’ll grab a bite to eat while I’m in the area.  That’s exactly how I finally wound up checking out 10 Barrel Brewing Co.

My roommate had more to do with the choice than I did, I must admit.  People are going crazy over local breweries these days, but I’m just not a beer guy.  There are a few I like and I tend to stick to them, and they’re primarily used to accompany food.  I guess I’m not the only one, because it seems like most of them offer food at this point.  The roommate is both a food AND a beer person, so she’s loving this development, and since it’s so hard to get her to try new places (at least as often as I would like), I happily agreed with her selection. 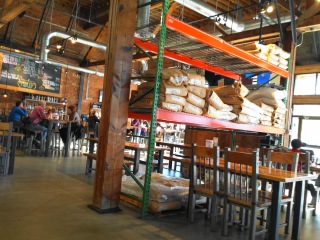 One thing I will say about this trend is that the environments doesn’t generally thrill me.  10 Barrel was not an exception.  There are vats, kegs, barrels, and industrial-sized bags of brewing ingredients everywhere.  I get it, I just think more could be done with it. 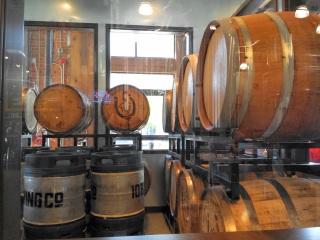 We took hard wooden seats at a hard wooden table (at least the aesthetic is consistent) and perused the menu.  Possibly because I’m a contrarian by nature, I was immediately drawn to the non-beer section of the drink list.  I unfortunately did not get a picture of the drink portion of their menu, and it’s not listed on their site.  The roommate got a beer (betcha didn’t see that coming) and I opted for their version of a gimlet.  I also don’t recall exactly what beer the roommate chose, but she had a fondness for blondes so it’s probably a safe bet that she chose that.  (EDIT: My roommate has reminded me that the beer she chose was German Sparkle Party.  Don’t ask me how I could have forgotten something like that.)  Like I said, not a beer guy and I’m not the one you want reviewing your beer, so it’s probably for the best.

What I CAN tell you is that I tried a sip of her beer and enjoyed it, and that I envied her when I tried my own drink.

Which decidedly lacked punch in both flavor and alcohol content.  Moral of the story: when at a brewery, order a beer, not a cocktail.  For eats, both of us immediately honed in on the B.L.A.S.T. sandwich.  I considered ordering something else so I could do a more well-rounded review, but this is one of the problems we always have: her tastes aren’t as strange as mine, and she always orders her meat well-done.  So even if I wanted to get a burger so we could do a split-and-swap, she wouldn’t go for it because I always order medium or medium-rare.  So, we both got the sandwich.

This was the point where my mood started improving decidedly.  I adored everything about this sandwich.  The grilled “extra sourdough” bread (with real grill marks!), the generous amount of thick, house-cured bacon, smashed avocado, tomato, arugula (I LOVE me some arugula), the pesto-infused mayo…everything was delicious.  Would I like to add a local, farm-fresh fried egg for a dollar?  What the hell do you think?  I’m sure I don’t need to tell you that adding a runny yolk to a sandwich is going to make it messy, and many napkins gave their all that day.  Believe me, it was worth it.  The sweet potato fries were good as well.

Even though it was only lunchtime, my roomie can rarely go to a restaurant without ordering dessert, and this time would be no exception.  Even though there were a few we wanted to try, we felt that ordering two would be a little overly decadent, so we decided to split the Red Velvet Twinkie.

The shape of the cake itself, and to some extent the texture, are Twinkie-like.  That’s where the similarity ends.  The cream is cream cheese-based, and the whole thing is finished with toasted coconut and fresh berries.  I may be a little biased since red velvet is one of the few cakes I actually really enjoy, but I loved this.  Everything about it was pretty much perfect for me.

Long story short, even though I don’t make it down there much and there are literally a dozen other restaurants in that area that I’m dying to try, you wouldn’t have to twist my arm too hard to get me back to 10 Barrel.  There are a lot of things on their menu I wouldn’t mind trying.  You would probably have better luck when the weather is nice enough to justify sitting outside though.

Food:  I really enjoyed everything, excepting the cocktail.  A
Value:  There are a lot of locally-sourced and house-made ingredients here, but $11.50 for a BLT?  I can’t help thinking that some of that is due to location and the popularity of the trend.  B-
Service:  No issues whatsoever.  Friendly, fast and informative.  A
Atmosphere:  I couldn’t help feeling like I was eating in a factory that someone had polished up and set up a few tables in.  I know a lot of you don’t have an issue with this, but I just don’t dig it.  C+
Final Grade:  B