My luck with Hawaiian-style food has been pretty hit and miss, especially for someone who has had so little of it.  Way back in the day before I decided I needed a domain name and a blogging platform so I could use a few thousand words to describe a cheeseburger, I did my reviewing on Urbanspoon, and that’s where I posted my first review of a Hawaiian-style restaurant.

I hope it’s not authentic

There was only one occupied table when I went, but I still had to wait several minutes to place my take-out order because the proprietor/cook was chatting with the people at the table. When he did return to the kitchen, he sang along loudly with the songs on the sound system. I understand the “just dropped by a friend’s place for some homestyle island fare” vibe they’re going for, but it’s not my cup of tea when I’m eating at a strip mall. The rice was fine and the macaroni salad was rich but good, but the char siu pork left something to be desired. I’ve considered returning to try something more traditionally Hawaiian, but there are several other places around Boise I’ve yet to try, and it will depend on how they stack up.

That eatery was Kana Girl’s Hawai’ian BBQ, Mark I.  Before I jump into discussing Kana Girl’s Redux, a little context is probably in order… 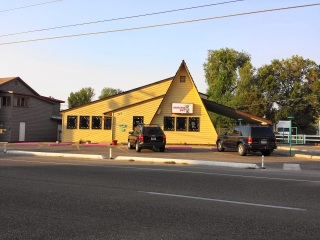 Since that experience, I’ve been to a few more Hawaiian food joints, and I’ve learned a little more about the Kana Girl’s backstory:  the short version (which can be explored in much more depth here, these guys aren’t shy) goes like this:  Idaho girl meets Hawaii boy in rehab, and within six months they are married and have opened a restaurant in a Meridian strip mall in the midst of a recession.  Despite that insanity, the restaurant built a solid fanbase and some critical acclaim.  Unfortunately, they decided to continue their habit of doing everything together by relapsing simultaneously.  Needless to say everything in their lives pretty much went to shit, including the restaurant.

I didn’t know the story behind the scenes at the time, or how close my visit was to everything imploding, but while much has been made of the Kana and Keoni’s fall and subsequent return in the local media, I haven’t come across much about the proverbial “rest of the story” being reported.  You see, some people ended up stepping in to keep the restaurant running, eventually completely taking over and subsequently rebranding it ‘Ohana Hawai’ian BBQ (which I reviewed here).  Those people ended up losing a lot of money on the deal, and mere months later the restaurant changed hands yet again, followed by a steep decline in both food quality and service, or so I was told.  There is yet another BBQ eatery in the space now, albeit a non-Hawaiian one, and that’s probably a good thing.  I was shocked to hear that Kana Girl’s was reopening at all, let alone in a bigger, more appropriate space, in a higher traffic area.  I was even more shocked to receive a message from Kana herself, inviting me to check out the new digs. 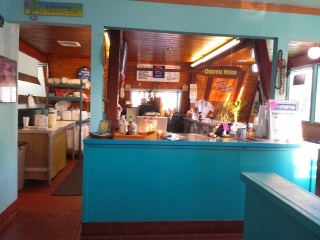 I decided to take her up on it, anonymously of course, with a lunch visit.  I’ve been to a few more Hawaiian food restaurants since my first time trying Kana Girl’s food, and Kalua Pig has been far and away my favorite menu item so that’s what I ordered.

And this is the worst I’ve ever had it, but the issue wasn’t the flavor.  The presentation leaves something to be desired (a little color, any color, would be nice).  The menu says the pork is cooked for fourteen hours, and that may be the problem.  It was just mush, I don’t know how else to describe it.  I love meat cooked slow until it’s falling-apart tender, but I should still need my teeth to eat it.  The rice had more texture and was decent, and the mac salad (my favorite item the first time I visited them) was still as good as ever.  Still, mac salad isn’t much return on an investment, and I might have written off Kana Girl’s for good were it not for the Mafa Chicken.

You see, several years back I encountered Mafa Chicken during the Obon festivities at the Idaho Oregon Buddhist Temple.  It’s a kind of take on fried chicken whose origins seem to come from Ontario, OR, and is so little known that my brief mention of it is apparently one of the top ten Google results if you do a search.  I’ve wanted to try it from a restaurant ever since, and it’s on Kana Girl’s menu.

So, I returned, roommate’s children in tow, to sample Keoni’s take on the dish.  Kana Girl’s has a pretty impressive kid’s menu (and gluten-free menu, and vegetarian menu, and pescatarian menu, and vegan menu), but these kids wanted Teriyaki Chicken so that’s what they got.  I added an order of Spam Musubi as well, just because it’s evilly delicious. 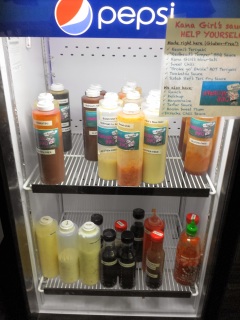 After the order had been placed and and the children seated under the oddly flickering lights in the main dining room, I went condiment hunting, and was surprised to see how many sauces are made in house.  I was also disappointed, because the majority of them seem to be specifically gluten free.  Look, I know there are people who suffer from celiac disease, and even more who suffer from various levels of tolerance issues, but these people do not make up the majority of the dining public.  To be succinct, gluten free soy sauce sucks.  It just plain sucks, and when it forms the basis of say, a teriyaki sauce, the end result suffers.

While there were packets of regular soy sauce available, that didn’t help out the kids much.  Adding to the problem, and it was my fault for missing this, it’s chicken thighs that are used here.  Since the kids have been pretty much exclusively exposed to white meat, this didn’t go over particularly well.  I tried a bite myself and liked it, but that sauce…sigh.

Kana Girl’s has the best Spam Musubi I’ve encountered so far.  I don’t know if it’s the slightly sweeter rice or the fact that a little less nori is used, but the flavor balance is very good.  This dish is just plain wrong, and I love it for that.

Keoni has a slightly different take on Mafa Chicken than what I’d been previously exposed to.  See, one of the things that separates this from standard fried chicken is the incorporation of tofu.  At Kana Girl’s, they use fermented (also known as “stinky”) tofu.  The end result is strong-flavored, VERY tangy, and something I didn’t exactly like but yet couldn’t stop eating.  Part of that is because I kept trying to figure out exactly how I felt about it, but mostly it was because as fried chicken goes, the technique here was awesome.  It was crispy, crunchy, and juicy, but not really greasy at all.

In the end, I’m happy for Kana and Keoni.  They are genuinely fun, nice people and I hope things work out better for them this time around.  Despite the teriyaki sauce and pork issues, they do have the best mac salad and musubi that I’ve found so far, and since they also have a fried chicken dish without the tofu, I’ll probably visit them again.  I also wouldn’t mind trying the Spam & Eggs, and maybe even the Loco Moco.  For those gluten-free and vegetarian people who read my stuff, I’d definitely recommend checking this place out.

Food:  A little good, a little bad, but enough promise to make me want to keep exploring their options.  B-
Value:  Good prices, most things are in the eight to ten dollar range.  A
Service:  This is where they really excel.  These guys love what they do, and you can feel it.  A+
Atmosphere:  A little cheesy, but not unpleasant.  They could wipe down the tables a bit more often.  C+
Final Grade:  B-