I’ve been battling a nasty head cold this week, and consequently have been spending a lot of time lounging around looking through pictures from restaurants I’m way behind on writing up.  Probably due to the way I feel and the time of year, the one that’s leaping out at me is from a weekend trip I took at the tail end of the Summer.  What I wouldn’t give to be dining on a warm patio right now.  Anyway, my family only ever really goes camping in Oregon, and at Wallowa Lake specifically.  The roommate, her kids and I joined them for a few days, and decided to grab a bite in Joseph on our way out of town.  We needed something that satisfied both children’s palates and our own, and we found it at The Embers Brew House. 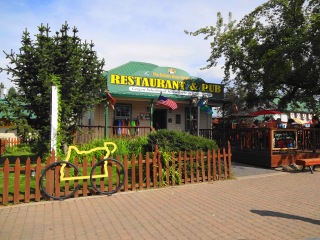 The Embers is definitely pub-geared (they proclaim to have the largest selection of micro brews in the state of Oregon), but perhaps due to being located on the main drag in a tourist town, they’re also both family and pet friendly.  The inside has a decidedly brewpub kind of feel…

…but they also have a spacious and gorgeous patio with a terrific view of the mountains, and that’s where everyone was sitting the afternoon we dropped by.  I’m not much of a beer fan, but the roommate is and I do enjoy one or two with this style of food, but we had a long drive ahead of us and stuck with soft drinks.  I honestly don’t recall if the place didn’t have a kids menu (their website doesn’t show one), but both children ordered from the appetizer section: Mozz Sticks for the tween, which she loves and can easily make a meal of, and Finger Steaks for her little sister.  Both adults being big fans of French Dip, we each ordered one of the Home Style French Dip & Fries (though we chose salad instead of the fries) plates.  I also tacked on an order of the Pub Poutine, simply because I just can’t NOT order any variation of poutine I come across.

About that poutine: Brown gravy?  Check.  Melted cheese curds?  Check.  Fries?  Steak fries.  Interesting.  They were less greasy than I’ve generally had in a dish like this and as such the decadence factor was cut by a little bit, but then again so was the gut bomb factor.  Not the best or most traditional poutine I’ve enjoyed, but I still dug it.  To my dining companions, this was something of a new dish, but the reactions were mostly positive once the initial wariness had passed, and some polite samples turned into larger helpings.

Mozz(arella, obviously) sticks…well, they’re classic.  Generally, in my experience, they’re either good or terrible without much in-between.  These were good.  Lightly beer battered, not overly greasy, good seasoning, heated all the way through.  Served with both marinara sauce and ranch, just in case deep-fried beer battered cheese isn’t unhealthy enough for you.

My luck with finger steaks has been pretty hit or miss.  Mostly miss.  And that’s sad when one hails from the home of the finger steak and is old enough to remember the ones from the Torch (and I’m not linking to the Torch’s site because they no longer serve up food, only strippers who don’t actually strip).  In the past couple of years, I’ve sampled them from three or four places around Boise, and I’m sorry to say that The Ember’s easily best any of the local options I’ve tried.  Once again, not greasy.  Quality meat, no funky bits or undertastes, not even from the oil.  Tender, juicy, flavorful, these were easily my favorite item of the meal, and I pilfered what I could.

Unlike the Mozz Sticks, the Finger Steaks are served with a side of fries.  Thin, crispy, ever-so-lightly battered, and yet again not greasy.  The not greasy thing is a lovely pattern at this place.

Let me just get this out of the way: the side salads were by far the weak point of the meal.  The greens were pale and had seen better days, but at least the cherry tomato was nice and ripe.  As to the sandwich, rather than sliced roast beef, here we have a hoagie roll piled with a generous portion of slow-cooked pot roast.  The beef itself isn’t heavily seasoned, and there is no interference from cheese or grilled onions.  I guess they figure that if you’re dipping a beef sandwich in beef sauce, beef is probably the flavor you’re craving, and that’s just fine with me.  They do make horseradish available upon request, and request it we did.  They brought it in a plastic condiment cup, and it was pretty straightforward.  Not a horseradish aioli or a horseradish sour cream, just horseradish.  And even though I’m still getting used to spicy food in terms of peppers like jalapenos or habaneros, I’ve long had a fondness for things like wasabi, Chinese mustard and horseradish.  Stuff that assaults your sinuses rather than burning your mouth.  I have an almost masochistic relationship with it. loading it on to the point that I usually shed at least one involuntary tear.  This was a perfectly decent sandwich that I wouldn’t order again, because I have to be honest:  I was, and still am, simply jealous of the young ‘uns finger steaks.  I will definitely return to The Ember, and when I do, I’m going straight for those.

Food:  Bar food that’s kid friendly, flavorful and not greasy, gotta love it.
Value:  Pretty much what you’d expect.
Service:  Fast and friendly.
Atmosphere:  Like I said, a spacious patio with a mountain view on a Summer day is hard to beat.
Final Grade:  A-