Way back in July of 2010, less than a month after I started this blog, I did a review of Boise Fry Company.  I was still pretty new to this whole thing, it was only my seventh post, and I had no way of knowing how controversial and educational it would be.  It was a mixed review, but all anybody seemed to take away from it was the negatives.  I received some pretty angry messages from BFC‘s legion of fans, and a few very pleasant ones from the establishment’s proprietor, the first time anyone associated with a restaurant contacted me about my review.  When all was said and done, it was a great learning experience, and luckily nothing else I’ve done has generated the kind of heat that write-up did.  I remark on this because that may be about to change.  You see, much has changed since that BFC review.  I’ve published a couple of hundred write-ups at this point.  My photography skills have marginally improved.  I’m pretty much over all the things that used to irritate me about going downtown for a meal.  The eight year-old whose comments provoked such rage from a few fringe types turns thirteen next month, and yes, she’s gotten less picky.  A little, anyway.  And we now have a specialty doughnut shop, something I’ve bemoaned the lack of since falling head over heels in love with Voodoo Doughnut. 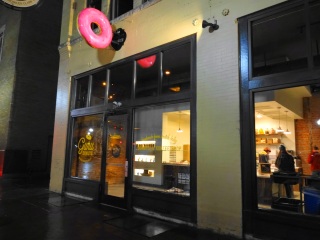 Guru Donuts has been around for a while, just over two years I believe.  They popped up at various festivals and events, occasionally spreading out into providing pastries to markets and coffee shops throughout the Boise area, eventually even having a weekly pop-up shop.  And without fail, every time I mention my love for Voodoo, someone brings up Guru.  Honestly, I just didn’t want to deal with the hassle.  I was always at work during the pop-ups, and watching the schedule to see which locations were getting which flavors on a certain day when I happened to be off, then trying to rush to the right place first thing in the morning on my day off before they might run out…I just didn’t feel the motivation.  Of course, now they have a real permanent, brick and mortar spot, shared with the aforementioned Boise Fry Company.  And that’s how I found myself freezing my ass off, headed downtown just before 6 a.m. last Friday.

Guru has only been open for a week and change, and it’s possible all cylinders aren’t firing just yet.  There was a wide selection of doughnuts, but not all of them had a description tag.

Luckily, the employees are well versed in the varieties and their ingredients.  Unluckily, most of the doughnuts have cute names I can’t quite remember.  We selected an assorted dozen, had them boxed and got back in the car before the little bit of remaining heat left from the earlier drive could dissipate.

Back home, we woke my roommate’s children and surprised them with our sugary bounty, warning them that we intended to cut the things up into smaller pieces so we could sample everything.

Let’s just get the really bad part over with.  The Rainbow Twist is a vegan doughnut, and the worst doughnut I’ve ever had.  I literally took one bite and then spat it into the garbage.  The roommate wasn’t as put off, but she didn’t like it, either.  The Maple Bar, my second favorite kind of doughnut in the World, was just disappointing, in that the flavor was extremely muted.  The roommate remarked that if I told her to close her eyes and gave her a bite of it, she likely wouldn’t be able to identify what it was supposed to be.  The Hipsterberry, probably Guru’s trademark doughnut, didn’t grab me, but then again I don’t really dig berry-flavored things.  The roommate was fonder of it.  The Chai was the first big hit, both of us being very taken with it’s bold flavors.  Hell, I don’t even LIKE Chai and I would order this again in a heartbeat.

Next up was some donut I don’t recall the name of.  All I can tell you is that it’s good (love Butterfinger, but prefer it in things because eating them straight leaves you picking pieces from your teeth for the rest of the day), and it’s not the one they call the Bart Simpson.  It might be the My Milkshake, but don’t quote me.  The Boston Cream (also known as a Bismark, depending on the place) was good as well, but not the most impressive version I’ve had.  The chocolate icing is better than the maple by far, but still not as flavorful as I would like.  The Cinnamon Twist is pretty much exactly what you’d expect, perhaps a bit better balanced than most you’ll find around here (i.e. more cinnamon and less sugar).  The Cake Donut was the second thing to really impress me, with its lack of greasiness and lovely outside crunchiness.  And that brings us to the Girl Scout.  Based on the description and the name, I was expecting Samoa, and that’s the though that was in my head as I took a bite.  This thing does NOT taste like a Samoa.  Rather, the second I tasted it I couldn’t stop thinking it was an amazing recreation of the taste of Almond Roca.  This wasn’t just in my head, the roommate concurred completely.  Luckily I’m a big fan of Almond Roca so I absolutely loved this, even just a little bit more than the Chai.

As far as the other three go, there was a chocolate with sprinkles for the younger child, the tween got a maple bar of her own, and there was a square one with chocolate icing and chocolate chips.  The kids said their dedicated donuts were good, but they weren’t doing backflips over them or anything.  The square one didn’t go over well with either of them due to the chocolate chips being too dark, but I thought it was okay.  The more I think about it, I seem to remember something about their square donuts being vegan as well, so I might have to try the normal version of the Hipsterberry if that is indeed the case.  When all is said and done, I hate to say it (and hate even more the shit I’m going to get for saying it), but I still prefer Voodoo, generally speaking.  They’re better at the classics.  However, some of the specialty flavors from Guru give Voodoo a serious run for their money, especially since they seem to be focused more on harmony than novelty.  I would be just as happy with a Girl Scout as I would with a Portland Cream, and with a Chai as much as a Mango Tango, and they just might have the best cake doughnuts I’ve ever had.  And unlike Voodoo, Guru rotates their specialty flavors, so there’s still a bunch I haven’t yet had the opportunity to try but would like to, as long as I’m not chased out by a torch-wielding mob.  And the roommate has her fingers crossed for a jelly-filled doughnut.  Yeah, I think we’ll be back.

Food:  Kind of a mixed bag, but when it’s good it’s really good.
Value:  Not bad at all.  More than you’re going to pay for grocery store doughnuts for sure, but it’s worth it.
Service:  Knowledgeable, helpful and friendly.
Atmosphere:  Definite Northwest, kinda hippie-ish vibe.
Final Grade:  B+