Did you know we have a National Hot Sauce Day?  We do.  Of course, we have a “national day” to impress every sort of foodie, but few niches have as many adherents as hot sauce.  Those who have been with me since the early days of this blog (or who enjoy copious amounts of back-reading) will know that I used to be a big wimp when it came to hot and spicy foods.  Nowadays I’m…well, not as much of a wimp, anyway.  There were two big catalysts for the change: First of all, my roommate and constant dining companion, who was always there to remind me how many things I was missing out on because of my heat phobia, and second was my first taste of habanero.  I fell in love with it (even in the muted version I tried), and resolved myself to building up my tolerance so that I could sample more, varied, and hotter habanero dishes.

So, a few months back when I was received an e-mail asking if I would be interested in sampling Tabanero Hot Sauce I didn’t hesitate, I simply replied back with a confirmation and my mailing address.  After a couple of weeks had passed with no further word, I’d all but given up, but then (on National Hot Sauce Day, no less), I arrived home after work to find a package waiting for me. 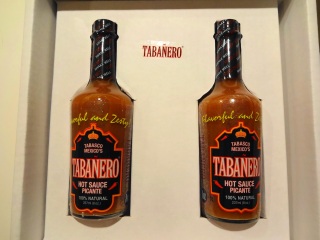 I had expected perhaps a little novelty sample bottle, not two eight-ouncers.  What would I do with all of this?  Did anyone there read my stuff enough to know that I’m still cautious on the spicy food front?  And of course I knew they were hoping for a write-up of some kind, and reviewing products is not really my forte.  I lifted a bottle out of its neat cardboard cradle and examined it.  “Flavorful and Zesy” is printed at the top of the bottle, which I had to admit sounded more pleasant than all the hot sauces I see in the store that promise to obliterate my mucus membranes and make me want to gut-punch elderly people or some such nonsense.  I honestly can’t think of another hot sauce that makes such effort to describe itself as “zesty”.  At the bottom of the bottle is the message “100% Natural”, which is of course all the rage right now (as it should be).  I flipped the bottle around and checked out the ingredient list:  Habanero Peppers, Carrots, Onions, Key Lime Juice, Agave Nectar, Garlic, Salt, Grapefruit Seed Extract.  Wait, no vinegar?  Obviously this wasn’t just another Tabasco clone.  Very curious now, I shook the bottle well as the safety seal advised, opened it up, and used the tip of my pinky to transfer just a drop (I had no idea what to expect, after all) from the bottle to my tongue.  I was impressed immediately.  It was hot, but not punishingly so.  It was zesty, as advertised, just a little sweet, and very flavorful overall.  Somewhere on the scale between medium and hot, but closer to medium.  I decided to be a bit bolder.

Okay, so obviously larger quantities increase the heat, so I’d bear that in mind.  But now, what to do with this stuff?  I’d never tasted a hot sauce like it, it was more complex than I’d expected.  I also knew I wouldn’t really have a grasp on it until I’d tried it on food.  The obvious choice wasn’t really an option, as the nearest taco truck was about half an hour’s drive away.  Suddenly, I recalled seeing people dump hot sauce on their eggs in scores of different breakfast eateries throughout my life…it was like my life flashing before my eyes, except only the parts from greasy spoons and truck stops.  It’s always struck me as odd, but since I had eggs at home…

A few minutes later I had a plate of oil-basted eggs and wheat toast in front of me, to which I applied a generous helping of Tabanero.  You know what?  I’m sorry to all those people I’ve frowned at in diners for dumping hot sauce on their eggs.  This was really good!  As for the sauce itself, the spicy/zesty/sweet flavor profile reminded me vaguely of sweet chili sauce, albeit thinner, spicier and less sweet.  Having made that connection, I resolved that my next experiment would be with Asian food.

A few days later I was at my favorite local Thai joint, eating their take on Vietnamese egg rolls.  I’ve heard of people taking their own condiments to restaurants but had never done it myself, and it might explain why I was met with shocked stares from the people I was dining with when I pulled an eight ounce bottle of hot sauce from the pocket of my hoodie (it has to be easier for women with their purses, I found myself wishing that they had sent me one of the five ounce bottles rather than two of the larger size).  I dumped a whole lot of Tabanero on a slice of egg roll and popped it into my mouth.  It was good, but not as good as the eggs.  The flavor profile was right, but the consistency and balance were a little off from what I’m used to, so I think I’ll stick with sweet chili sauce at the Thai joint in the future and go back to not being the guy who brings my own condiments to restaurants.  In the meantime, my brother and I polished off almost all the egg rolls, and a fair amount of the Tabanero in the process.

I like things in threes, so I decided I needed to try this stuff on one more thing before I wrote it up.  I was still thinking Mexican, but there still wasn’t a taco truck in town.  And so the Tabanero bottle went into hibernation in the refrigerator door for a couple of weeks, until one late weekend night when I found myself really hungry and unable to think of anything that sounded good, a condition I completely despise.  I have a short list of go-to things for moods like that, mostly cheap, filling, comfort food dishes that ALWAYS sound good.  And that’s when it finally struck me that just a short drive away, there was a 24 hour drive-through Mexican joint.  I hadn’t considered them before because I was thinking tacos, and I do NOT like the tacos from this place, but I do love their burritos.  In fact, there is one burrito in particular there, my favorite no less, that I always add copious amounts of salsa to.

Chile relleno is awesome, and wrapping it in a grilled tortilla just makes it better and easier to eat, but it’s not typically a dish that gives your taste buds a work out.  Luckily it tends to be served by places that have an array of salsas and sauces on hand so you can customize.  But unlike the salsa I normally apply to this burrito, so thick that I have to add more with every bite, the thinness of the Tabanero sauce allowed it to seep down into every nook and cranny.  This definitely worked, and was enough to convince me that I had indeed found a new sauce to add to my small rotation of constant hot sauces.  And since they were so generous as to send me two bottles, I’m able to keep one in Meridian and one in Eagle.  I’m actually considering purchasing a third to keep at work,

In case you haven’t been able to deduce it, I highly recommend Tabanero.  If, like me, you prefer a sauce that adds flavor without burying the taste of the original dish, and doesn’t just add heat for the sake of it, I think you’ll enjoy it as well.  Unfortunately I’m not certain if you can purchase it locally, but if when I finally run out I can’t find it in any stores around here, then I will be ordering some more online (you can do that here, if you’re so inclined).  They also have a Bloody Mary mix that I’m very curious about…