I’m way into the weeds with my backlog of reviews, so I need to just start pounding them out quick and dirty.  My apologies to any eateries I might slight with the lack of my usual verbosity, and my congratulations to those of you who have always thought me a little overly wordy.

Anyway, Nudo Ramen House is the perfect place to start.  We were on our way home from my cousin’s wedding, and I was able to convince everyone that I needed to make a detour for some ramen.  We weren’t far off from Spokane at that point, so Nudo is where we ended up.

The reason Nudo is a great place to start cranking out some quick reviews is that we all ordered the same thing, and were only in town long enough to eat it.  I don’t have much to say about Spokane itself other than 1) it’s kind of quaint for a slightly larger city, and 2) it smells.  Bad.  Like real bad.  I’m not sure what their sewage system is, but the vents throughout the streets and sidewalks are doing unpleasant things to the air.  This made me a little concerned when I saw that Nudo had their big garage door-style front open to the street, but it turned out to be far enough away from any of those vents that the stench didn’t permeate the restaurant. 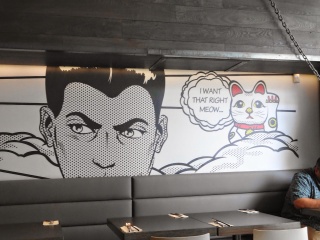 The place is cute, reminiscent of stark modern Japanese decor and yet literally wallpapered with kitsch.  If business is slow, you’ll have a little space, but considering that the seating is more or less communal it would definitely help to be an extrovert on a busy night. 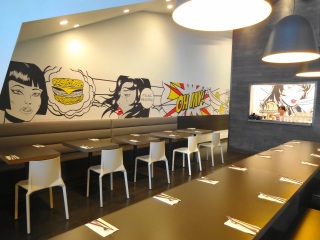 The assembled diners were my mother, my niece, my roommate’s youngest daughter, and of course yours truly.  Nudo is actually nice enough to have a kids menu, even if it is just a smaller portion of ramen and a soda.

The kids had no idea really what was going on. and my mother had been hearing me go on about the tonkotsu broth I’d had during my trip to Seattle for so long that we all ended up ordering that.

I was very impressed that the ramen on the kid’s menu was a carbon copy of the adult version, in everything but portion size.  With the tonkotsu variety, that means fresh noodles, bbq pork, hard boiled egg, bean sprouts, green onion, shredded carrot, corn, braised bamboo shoots, a strip of nori, and a slice of fish cake for good measure, all mingling in a bowl of piping hot 15 hour pork bone broth.  The egg, pork and noodles disappeared pretty quickly, because those things were familiar to the children.  Everything else was a little odd to them, whether in general or simply in this context, but either way they mainly just picked at the rest and there was quite a bit left in their bowls when they pushed them away.  I don’t blame the restaurant for this, I just need to train the little ones more gradually.

As for me, I definitely dug the broth and the pork.  The noodles were quite a bit different than the wheat version I had the first time I ordered this dish, but still good, and fish cake is always appreciated.  I would have liked the egg to be a little less hard boiled.  The rest…well, it seemed kind of busy to me.  I’m sure a lot of people like to go crazy with the toppings, but I prefer to have just a few high quality ones and focus primarily on the broth, which is the best part of this dish.  Seriously, I could just drink mugs of the stuff.  I used to think the reason why ramen joints served fairly basic bowls and charged extra for every additional topping was purely financial, but now I think of it kind of like the pizza thing: too many ingredients make you lose the essence of the thing itself.  A little variety is nice, but we’re talking about eight add-ins beyond the necessary meat, noodles and soup.  As weird as the idea of asking a place to hold back on ingredients is, I would likely do it if I returned to Nudo for ramen, which I’m not likely to do.  However, that’s not to say I wouldn’t go back to Nudo.

Hey, does anybody remember the Ramen Burger?  It was far behind the Cronut in terms of food crazes in 2013, but since Asian food always trumps sweets to me, I was much more interested in it.  I’m not likely to get out to NYC or L.A. anytime soon to try one, but just like the Cronut has its knock-offs, so does the Ramen Burger, and in case you’re a little slow catching on to where I’m headed with this, Nudo has their own version.

Adding one of those was an pretty much an afterthought, just to be able to say I tried it.  Just because I found it interesting doesn’t mean I thought it was necessarily a good idea, and I didn’t expect it to be anything like the original, but once again I didn’t and couldn’t know that, so who cares?  Apparently what we know here as the original was inspired by something similar in Japan that uses a pork patty rather than a beef one.  I ordered one, saying we all wanted to try it; lo and behold, it arrived cut into neat quarters with a pick holding each one together for easy sharing.  Definite points for customer service there.

I have to say this for Nudo: they’re not trying to copy the “original”.  The noodle “buns” and arugula made the transition but there’s no green onions here, and the Angus beef has been swapped out for Kobe.  Gone are the green onions, but there is cheese and tonkatsu sauce.  Not sure how it stacks up against the trademarked version, but it’s damn good.  It shouldn’t be, but it is.  Salty, savory, chewy, cheesy goodness.  And while I’m not likely to make a special trip back for another one, I would definitely stop in again were I in the area.  So if you find yourself in Spokane for work, a family reunion, just passing through, whatever, consider stopping by for one of those.  At least you’ll have an interesting and yummy experience.

Food:  I’ve had better ramen, but none of the places I had it served burgers, so maybe we call it a tie?
Value:  A little pricey for noodles, but I’m sure part of what you’re paying for is the downtown locale and slick decor.
Service:  Impeccable.  How can you beat that presentation with the share-a-burger?
Atmosphere:  Look at the pics.  I love it, but others probably wouldn’t.
Final Grade:  B