We (the roommate and I) got off to a late start on our way back from the Oregon Coast, and neither of us were particularly hungry when we checked out of the hotel.  Subsequently we didn’t stop for food until we stopped for gas, which happened to be about an hour down the road in Corvallis.  My original hope had been to hit Fishtails Cafe on our way out of Newport (those fried oysters, yum), but The Broken Yolk Cafe was a decent consolation prize. 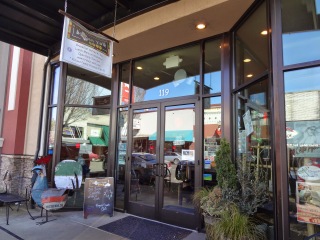 Now I’d never heard of Broken Yolk before.  If we hadn’t needed gas and decided to eat as long as we already had to stop anyway, I’d still be ignorant of it now.  As it was, I whipped out the smartphone, opened the Urbanspoon app, searched for breakfast spots in Corvallis, and there Broken Yolk was at the top of the list.  From the outside it looked like a particularly family-type breakfast eatery, maybe with a bit of a strip mall vibe.  Inside…well, I was a bit surprised.

I’ve only been there once, but on that occasion they played 80’s music and only 80’s music.  The walls are adorned with pictures of rock stars.  There’s a decidedly punk rock vibe to the staff.  The t-shirts featuring two fried eggs in the shape of a skull with bacon “crossbones” underneath was a particularly nice touch.

There’s even a holding pen for small children, which is great because the Broken Yolk is one of those rare breakfast and lunch only eateries that has a liquor licence. 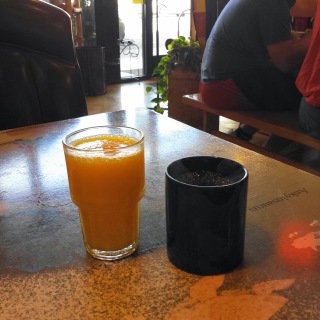 Interestingly enough we both ordered omelettes, just like the previous day in Newport.  I also duplicated my coffee and orange juice order.  It made for an interesting compare and contrast, because where La Maison definitely has the elegant French thing going on, Broken Yolk is definitely an eatery of the greasy spoon variety.

The coffee was good, just not as good (it is organic though, if you care about that), and the OJ was definitely not squeezed fresh.  Can’t win ’em all.

I was still pretty tired at this point in the journey, so I’m wracking my brain trying to remember what it was the roommate ordered.  Looking at the picture, I’m pretty sure it was the Mile High Omelette (sauteed bell peppers, hickory smoked ham, onions, and cheddar).  Pretty sure I tried a bite, but I’ll be damned if I can remember what it tasted like.  I do remember liking the home fries she ordered with it, and envying them over the hash browns I received.

After some internal debate about ordering one of the more interesting menu items like Loco Moco or the Hobo Hash, I finally settled on the Western Omelette (bacon, avocado, tomato, and cheddar).  Perhaps because Broken Yolk seems like the kind of place I’d want to be if I was hung over, or if I wanted to perhaps be hung over later considering their drink menu, I ordered like alcohol was a factor and paid the premium for the loaded or smothered or whatever they call it option on the hash browns, which gets them topped with grilled onion, cheese, and sour cream.  This was a bad move because the onions weren’t just grilled, they were burnt.  See that black thing at the bottom of the plate?  That used to be a piece of onion.  Anyway, that burnt flavor suffused the hash browns, but since I was in no mood to send them back and wait longer for a replacement I just scraped them aside as much as possible, unfortunately losing much of the cheese in the process.  Luckily though, there was plenty of cheese in and on the omelette, not to mention loads of crispy bacon bits and chunks of ripe avocado.  It was definitely a worthwhile dish, and between that and all the black coffee it finally got me into the headspace I needed for the long drive home.  A word of warning though: the strawberry jam, yummy though it is, is on the liquidy side.  Use sparingly or make sure you’re at least mindful of your surroundings and eating over a plate, otherwise the drippings are going on you.

Final thoughts:  I’d definitely return.  If I lived in Corvallis, I’d be at Broken Yolk at least once or twice a month.  Loved the staff, loved the atmosphere, loved the music, and I loved my omelette, I’d just order it with the plain home fries next time.

Food;  Overall tasty and satisfying, but I have to deduct for the visibly burnt onions.
Value:  You’d pay less at Denny’s or IHOP, but you’d notice the difference too.
Service:  The people are great.  I kinda want one of their t-shirts.
Atmosphere:  80’s music, graphically enhanced tabletops, lots of pictures of singers and musicians.  Luckily I wasn’t seated near the Rod Stewart picture, that might have killed my appetite.
Final Grade:  B-