Okay, one more road piece, then I’ll do a local.  Miss Golden Rule’s b-day was turning out kind of bland.  Dinner had been less special than expected, the weather wasn’t particularly conducive to hanging out at the beach, and we had no dessert plan locked down.  I had made some unsuccessful inquiries, and it was looking like our best bet at the last minute would be to grab some crappy cupcakes or something from Walmart.  A little smartphone wizardry saved the day.  MGR wanted carrot cake, and I found her some… 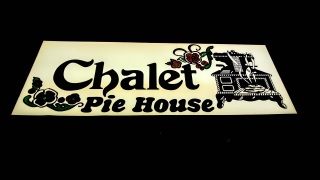 So the website says Chalet Restaurant & Bakery, and the sign says Chalet Pie House.  Either way, there’s a Chalet involved.  The birthday girl had initially been concerned that they wouldn’t have carrot cake, or that we were showing up too late and would be an inconvenience to the staff.  Seriously though, how long does it take to eat a piece of cake?  Spoiler alert: we were out well before closing time.

Anyway, I’d only read about their confections online and I was expecting a little pastry shop.  Imagine my surprise when we pulled up to a full-blown restaurant.  Everyone was in the mood for something different, and everyone was happily surprised to see there was still a wide selection of options to choose from.

The wee one ordered Chocolate Devil’s Food.  There was an awesome description of it on the tag inside the display counter that I can’t remember and can’t believe I didn’t get a picture of.  Suffice it to say that the staff has a sense of humor.  This was a solid cake, fudgy and delicious.  It suffered from only one problem, the same problem that the birthday girl’s Triple Layer Carrot Cake did…

…which is the same problem a lot of pro cakes and cupcakes suffer from: super-rich icing in disproportionately high amounts.  The roommate said the same thing about her cake that she had said about her dinner earlier, “good, not great”.  Carrot cake really isn’t my thing, especially not with raisins and pineapple in it. so let’s move on.

For once, I chose the best dessert!  The Lemony Lemon cake, which was zesty and moist, conquered the icing overkill issue by having two different kinds, a lemon filling and a citrus frosting.  I’m not much of a dessert guy, but I would definitely order this again.  And even if I never went back for cake (or pie) there’s always the regular menu, which includes a Dungeness crab omelette.  Also, the coffee was surprisingly good, even at just before closing time.

The other thing I should mention was the service, which was terrific.  Seriously.  Some of the best service I’ve ever had in an eatery.  Everyone seemed genuinely friendly and happy enough to be there, especially considering that it was the end of a Saturday shift in the middle of Summer.  The guy who cashed us out asked how everything was, and when I told him we were just ecstatic we were able to get some cake at the last minute for MGR’s birthday, he produced a little toy that played the Happy Birthday song, and he seemed as amused by it as we were.  There are a lot of restaurants in the area I still want to try, as well as a few favorites already that I keep returning to over and over again, but I suspect it won’t be long before I return to Chalet.  Marionberry pie a la mode sounds pretty good at the moment…

Food:  I’ll tell you when I’ve tried it.  So far I’ve just had cake, but that was pretty good.
Value:  I guess $4.95 for a slice of cake from a specialty place is normal these days.  This could be a reason I don’t order dessert much.
Service:  It’s like dropping into a restaurant staffed by friends, even though you don’t know a soul in the place.
Atmosphere:  Old school family restaurant.  Think JB’s, Shari’s, etc.
Final Grade:  B+