I loved Momo Dumplings.  From the first time I tried them as an indie vendor at a little table at the Boise Urban Market back in October of 2011 until the day their Meridian restaurant closed in November 2014, they were a consistent favorite for me.  I mourned the loss of that restaurant like I’ve mourned few others around here.  Hell, I’m still mourning it.  What they were doing was truly unique for the Boise area…at least at first.  In 2013, another momo joint called Mount Everest Momo Café opened on Broadway in Boise.  I didn’t try it, though.  I was very loyal to the Momo Dumplings folks.  I knew them to be good people, I loved their food, and I sung their praises constantly on my Facebook page and this blog.  When they closed up shop, I started thinking about that other place.  It would be a while before I was up for it, but I knew that I would have to go try them out sooner or later.  So it sucked when a fire gutted a chunk of the strip mall they were located in just a couple of weeks later.  It took them six months to rebuild and reopen, and by then my momo cravings were fierce enough that I was truly open to trying them from a new place.  SPOILER ALERT: this is a rough one, but try to stick it out.  There are a couple of surprises along the way. 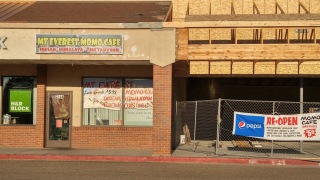 It would be a few more months before I would actually make it there, which is fine because it gave their old regulars a chance to get their fill and for things to get back up to speed.  When I finally showed up one evening with Miss Golden Rule, her kids, and my niece in tow, it wasn’t very busy.  The first thing I noticed was that the place had a diner feel somewhat similar to my old momo haunt, which made me wonder if it’s a typical style for Nepalese eateries.  Not really important though, I was there for the food after all.

After a perusal of the menu, we decided on quite a spread.  MGR would order the Chicken Tikka Masala.  Her teen daughter went for the Chili Chicken.  The younger girls would share an order of Chicken Chau Chau and a Chicken Pakoda appetizer.  Yours truly couldn’t decide between the Mixed Momo plate and the Lamb Chau Chau, so I ordered both because of course I did. 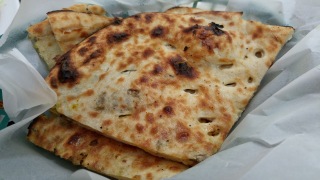 And naan, of course.  There are several varieties to choose from: plain, stuffed with cheese, topped with garlic, stuffed with onion and cilantro, etc.  Everyone ordered the one that sounded best to them (I of course opted for the one stuffed with lamb), and everyone was a little underwhelmed.  The stuffings weren’t particularly generous, and the bread itself wasn’t the best any of us have ever had.  It wasn’t the worst, either, but that’s not saying much. 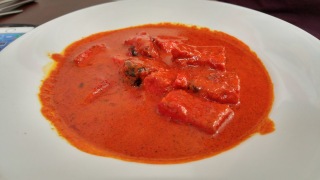 MGR’s Chicken Tikka Masala was one of the better dishes we ended up with, but once again not the best version available in Boise.  The sauce was very decent but the chicken itself was overcooked, a little on the dry and tough side.  I didn’t get a picture of the rice (the first of three items I missed due to the constant distractions of the hyperactive children at our table), but masala and rice is truly one of life’s great pleasures.  We were also brought a sample of the butter chicken (no picture item #2), but nobody at the table really dug it. 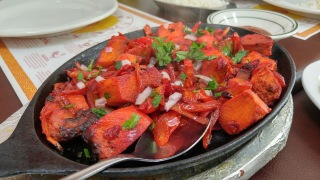 The Chili Chicken, described on the menu as “hot & spicy barbecued, boneless chicken dish mixed w/fresh chilies, onions & tomatoes” suffered from being overcooked even more than the masala, mainly because it wasn’t swimming in sauce.  Decent flavor I suppose, but when the meat is that dry and chewy… 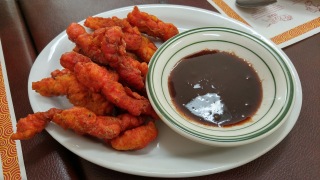 The Chicken Pakoda, which are chicken strips coated in chickpea flour and deep fried, were more successful (maybe they didn’t cook them as long because the pieces were so much thinner?).  I could happily work my way through a plate of these while watching a movie or being forced by friends or family to watch a sporting event. 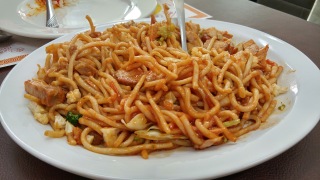 The Chicken Chau Chau, on the other hand…I’m not going to mince words, this is one of the worst things I’ve ever been served in a restaurant.  The menu describes it as “Tibetian style noodles pan fried w/chicken & vegetables“.  I know, not particularly helpful.  After verifying that none of the veggies were ones that would horrify the children, we ordered it.  I tried a bite, and the thought that popped immediately into my head was “ketchup chow mein”.  A little research later revealed that it is in fact a version of chow mein, and the girls were more or less okay with it, but I’m convinced that the primary ingredient in the sauce is ketchup.  Thanks, but no thanks. 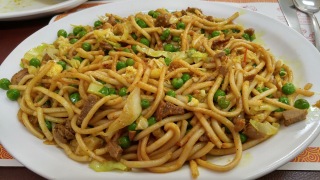 I was surprised that even though I just ordered the same dish as the girls but with lamb, what came out was so different.  My sauce was thankfully ketchup free…in fact, it tasted vaguely like pesto…but suffered from the addition of a shitload of peas, which I cannot stand.  It was unusual to eat something that felt like chow mean, tasted a little like Italian food, and had tiny pieces of lamb scattered throughout, and it wasn’t bad per se, but having to pick all those peas out greatly reduced any enjoyment I could have gotten from it. 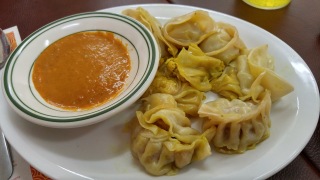 But let’s not forget the main reason I went there in the first place: momos.  I had been through Momo Dumpling’s menu enough times that I had a pretty good idea which shapes contained which fillings.  Of course I acutely missed the veggies, black eyed peas, and other accompaniments that I was used to, but I can deal if the dumplings are good.  These were.  Let’s break it down a bit.

Chicken Momo – This is the poultry option.  I preferred Momo Dumpling’s turkey version, but these were still good.

Veggie Momo – COMPLETELY different from Momo Dumpling’s version (potato, cabbage, onion, cilantro, spices), these were filled with mixed veggies, peanuts, and cheese.  They were also the only ones that didn’t hold together and arrived at the table torn and smashed.  That being said, I preferred their version flavor-wise.

Pork Momo – As much as I love pork, I was pretty indifferent about these dumplings at both eateries.  I think the poultry ones have better texture and take to the sauces better overall.

Yak Momo – Mount Everest really shined on these ones.  Theirs were juicier and far less gamy than the Momo Dumpling version.

Mild sauce – Similar enough to provoke nostalgia, but not exactly the same.  I’m sure I’ll adjust in time.

Spicy sauce – Item #3 that I failed to get a picture of, which is disappointing because this was by far the most surprising and impressive thing about the meal.  Momo Dumpling also had mild and spicy sauces, but they were just the same sauce at different heat levels.  The sauces at Mount Everest aren’t even similar to one another.  The spicy sauce here was dark, oily, smoky, and most importantly absolutely delicious.

To make a very long story shorter, in case you’re just skimming: go to Mount Everest and order the momos.  JUST the momos.  Maybe the Pakoda, too, but everything else we tried was much more miss than hit.  There are a few other things that I’ll probably get around to trying, but my optimism is extremely cautious at this point.  The one thing I can say for certain is that I will never go there without ordering momos with spicy sauce.

Food:  Momos are good.  Order momos.  Anything else you do at your own risk.
Value:  Not exactly cheap, but when you’re the only game in town you can get away with it.
Service:  Terrific.  Friendly, generous and helpful.
Atmosphere:  Hole-in-a-strip-mall.
Final Grade:  I’m not bothering with this, because an average would indicate this place isn’t worth going to.  If you order the momos, it’s absolutely worth going.  Otherwise, you’re probably safer going to an Indian restaurant.