In a run-down strip mall in Boise, at the corner of Orchard and Emerald, there are a few treasures for those who care to look.  Orient Market is one, the best Asian grocery in town, and they expanded several months ago to a larger space at the other end of the strip.  If you haven’t been there since the move, you should drop by.  It’s much cleaner and brighter now, and all kinds of delights await in the much larger refrigerator/freezer section.  The Chiang Mai House Thai restaurant is also there, and I intend to try it soon since I’ve heard so many good things.  There is also a storefront that looks like it hasn’t been painted since the 70’s, not just because of the color combination but also the state of disrepair.  It is beyond this façade that you will find Wok-Inn Noodle.

I found this place through research I did after watching an episode of (what else?) No Reservations

set in Hong Kong.  That episode featured a man who still makes noodles the old-fashioned, permanently-disfiguring way.  I won’t go into any more details than that here, just keep an eye out for repeats on Travel Channel or better yet buy the DVD

.  It’s cheap and highly entertaining, especially since the set also contains  Shanghai, New York and Singapore episodes.  Anyway, I decided I simply had to try fresh, hand-made Asian noodles, and everything I found said that this is the place to go.  That was perhaps two years ago.  I fell in love with the place immediately, but rarely go there.  Honestly, I don’t think most of the people I know would necessarily want to accompany me.  The place has a bizarre, even other-worldly vibe to it, and I think many people would walk in, glance around and then walk right back out again.  For example, when you enter you’ll be hard-pressed to keep your eyes from darting to the right and lingering on the indoor jungle/plant collection. 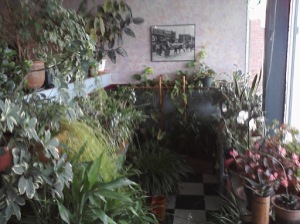 …and the waitress station, usually walled off in something reminiscent of an office cubicle, here right out front for all to see.

From the entryway you can also see behind the front counter into the narrow kitchen which always seems disorganized, but always at the same level.  It never seems to get any better or worse.  The chef, a thin older man with permanently mussed hair, is constantly at work in there, seemingly regardless of how many or few customers are around at the time.  To your left by the front window there’s a refrigerated case of various ingredients, mostly sauces and prepped vegetables.  There are also some computer monitors, usually with pictures of nature scenes on them, and speakers (the old low-tech kind with wires visible) scattered around. These latter pipe out what I can only describe as the most interesting and diverse selection of music I’ve ever encountered at any restaurant. Most of the times I’ve been there, it was classical music. On this occasion, it was island music like you’d expect to hear in the background of a Sandals commercial. The music is courtesy of a huge selection of old vinyl records that line the better part of two walls, and rumor is that the chef/proprietor invites his diners to make selections from among them to listen to while they eat, like some kind of giant, archaic jukebox.

Because it had been so long since my last visit, I decided to have the House Noodles again.  I’ve never had anything bad from Wok-Inn Noodle, but those are probably my favorite.  You get a good pile of fresh noodles, covered with sliced veggies including zucchini, carrot, and broccoli.  What makes these the “house” noodles I would guess is the inclusion of all the main proteins.  In descending order (likely by price of ingredient) you get large but still bite-sized pieces of chicken, beef and shrimp.  These are then covered in what at first seems like a lot of gravy-type sauce, but always turns out to be the perfect amount as I always seem to run out of everything at the same time.  Just for the hell of it I also got an egg roll because I couldn’t remember if I ever had from this particular place.  I wandered around while my order was being prepared and tried with varying degrees of success to get some pictures for this review.  As you can see, most turned out to have lighting and blurring issues.  Like I said, the place is other-worldly.  I asked the woman working the counter for a take-out menu.  As Wok-Inn is one of those mom and pop (well, just pop in this case) operations that prints their own menu and then sticks it in reusable plastic folders, she just opened one up and removed the insert for me.

It was just their lunch menu, so I asked for a copy of the dinner one and was told it’s exactly the same, but the prices are a little higher since the portions are bigger, so if you’re thinking about trying them for dinner just look at the rates above and add a buck or two.  I know that in some part of the preparation of my food, a microwave was used.  I heard it so I went and peeked around the corner to confirm it.  What it was used for I don’t know, since the food all tasted fresh and the egg roll had obviously been fried.

The egg roll I could take or leave, but the noodles were as good as ever.  I’m not saying fresh is any better or worse than dried, but there’s definitely a difference in the way they absorb sauces and flavors, the way the texture plays alongside the other ingredients, etc.  The vegetables, all different types and needing to be cooked for different amounts of time to be right, were all perfect.  The meats, all covered in sauce though they were, each had their own texture and flavor as well.  I tried a couple of times to get bites of different things together and even everything all at once, but in the end I just picked at different things so I could enjoy their distinctiveness.  Speaking of the sauce, I can’t tell you what’s in it, because I don’t know.  More of a gravy than a sauce, it’s light-brownish and doesn’t have any flavor strong enough to obscure the quality of the other ingredients.  Is there chicken stock involved?  That would be my guess.  Cornstarch is obvious as well.  But despite the bright, lovely flavor, I don’t taste any distinct spices.  And what are all these black flecks?  It’s not peppery.  Is it carbonization from the wok?  It certainly doesn’t taste burnt or metallic.  It’s just…perfect.  I seem to keep using that word to describe the place.  When  you’re there, the atmosphere is so odd that you could actually imagine you were in another country in some hole-in-the-wall eatery, and that does affect the experience (including the food).  That’s nice in its own way, but I like getting the food away from there just as much so you can appreciate it on its own merits.

If sushi chefs are artists, then the chef at Wok-Inn is a master craftsman, unassumingly weaving subtlety into complexity with a skill that only comes from years of dedication and experience.  Stop by, and if appearances make you skitterish then just get your meal to go.  If you like Asian food, especially noodles, then you owe it to yourself to try this place.