Occasionally I’ll go to a very new restaurant and have a frustrating experience, but see enough promise in them to realize maybe I should give them another chance down the road.  That instinct has rarely let me down, but in this case pretty much everything I’ve heard and read has led me to believe that none of the things I saw as issues have really been resolved.  So, rather than hold off on the write-up until a return visit that isn’t looking like it’s going to happen at this point, I figure I might as well just post what I’ve got and move on to the next place.  So, with that in mind… 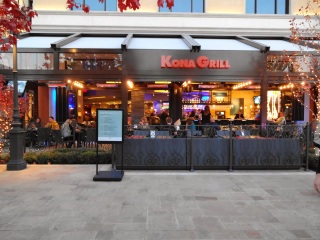 I’ve been pretty open about my fascination/obsession with the new Village at Meridian development.  Especially the eateries and movie theater.  What can I say, I’m geared toward slightly bigger city environments, and the Village definitely has the air of one.  After attending the preview event for Yard House, my next dining destination was Kona Grill a few nights later.  I had been very happy with the little bites at Yard House, but Kona Grill was fully open for business so I was looking forward to seeing them in action.  Mom, Sis and I decided to hit them up during happy hour.  I had joined their Konavore program (which is supposed to provide news, events and exclusive offers but has so far mostly provided one coupon and a few e-mails advertising gift cards around the holidays) and received an offer for…well actually, I don’t remember exactly what the offer was.  It was either a free or discounted appetizer when you bought an entree.  Anyway, I made reservations through Open Table (which would get me points through their rewards program), noting in the comments section that I would prefer to be seated on the patio (this was a few months ago when the weather was still nice enough for it).

When we arrived, the hostess grabbed a few menus and led us into the restaurant to the farthest possible place from the patio.  I mentioned my request and pointed out that we were there for the happy hour specials, asking if we needed to be in the patio or the bar area.  The hostess said that only applied to the happy hour drink specials, and left us alone to peruse the selections.  It didn’t take long for us to figure out that the menus we’d been given didn’t mention any of the happy hour food specials, so we pointed that out to the waitress when she came to check on us, at which point we were informed that we would indeed need to sit in either the patio or the bar area to take advantage of those.  I told her that this information conflicted with what we had previously been told, and when she just stood there staring at me I told her we would like to move to the bar area.  Friendly enough but with just a slight undercurrent of tension, she led us to the bar area.  When we got there, I saw her flash a smile at the waitress there.  A tight-lipped smile that didn’t reach her eyes.  The kind of smile that communicates “I’m sorry I’m bringing these difficult people to you.  Brace yourself.”  Sigh.

Finally seated, we started looking through the regular menu and the happy hour supplement.  My phone buzzed to let me know I had an e-mail waiting; it was from Open Table, advising me that my reservation had been cancelled and I would not earn any points for this visit.  Guess the bar area doesn’t count.  We discussed various options since the regular menu was appealing to me more than the happy hour menu at the moment.  Mom and Sis decided to split a Crab Crunch Roll and some Potstickers.  I was leaning toward the house specialty Macadamia Nut Chicken, but Mom and Sis argued that it was too much money when I was just there to sample the place.  It seemed a little on the pricey side but not ridiculous, but it turned out that I had been given a copy of the lunch menu while my dining companions had received the correct dinner menus, and there is a five dollar difference between the lunch and dinner versions of that dish.  I ended up going with my second choice, the Big Kahuna Cheeseburger (I’m a Tarantino fan, sue me), another featured item and one with less than a dollar’s difference no matter what time of day you order it.  I decided to use my coupon and get an order of the Avocado Egg Rolls to share with the table, but when our new waitress arrived she told me I couldn’t use the coupon during happy hour.  I pointed out to her that I wasn’t ordering anything from the happy hour menu, but she wasn’t going for it.  I decided to get the rolls anyway.

What came next was a pretty excessive wait, followed by the food arriving in a strange order.  I don’t remember all the details, but suffice it to say the service needed a little help in a lot of regards overall.  At least our final waitress was nice…  Anyway, moving on to the food.

The Avocado Egg Rolls are pretty much what-you-see-is-what-you-get.  There are a few other ingredients in there, but for the most part it’s roughly chopped avocado in an egg roll skin, fried and then sliced lengthwise at an angle, perhaps to make it easier to apply the honey cilantro dipping sauce.  The egg rolls were decent but a little bland, and the sauce didn’t help me out much because I hated it like poison.  Still, I love avocado and I enjoyed these overall.  Just not enough to understand why they cost nearly $10 outside of happy hour.

Kona Grill’s potstickers are a chicken and veggie variety, competently made, and I have to be honest and admit that I like a little vegetable matter in my potstickers.  That lump of steamed meat you find inside them at most places doesn’t do a lot for me.  Once again though, unless you get them on the happy hour special, you’re paying nearly two bucks per dumpling.

Surprisingly enough the Crab Crunch Roll was the only sushi we ordered, even though we all adore sushi.  It’s crab, cucumber, and a mayo-based sauce wrapped in the usual nori and rice and then garnished with tempura flakes and eel sauce.  I didn’t care much for it but Mom and Sis seemed to like it well enough, and since it’s a pretty average-priced sushi item normally, at happy hour prices it’s actually a decent bargain.

The Big Kahuna Cheeseburger (and yes I added bacon, do you even know me?) comes with caramelized onions, lettuce, cheddar cheese, and tomato on a brioche bun with a pickle spear.  I paid another dollar to upgrade the fries to the sweet potato variety, and the fry sauce that accompanied them was one of my favorite things of the night.  The fries themselves were okay but a ridiculously small portion, especially when you’re paying extra for them.

The burger continued the parade of mild flavors, but it was still pink inside.  That’s at least an improvement over what I get when I order medium most places I’ve been in Meridian.  The cheese was also perfectly melted.  The lettuce was the standard iceberg and the tomato was woefully under-ripe.  While not as overpriced as the appetizers, it still wasn’t exactly a bargain.

When we tallied up the experience at the end of the meal, the consensus was that the service needed some work, the food could use a little more flavor, but if you came during happy hour and ordered the right things, it would be worth a return visit.  Still, we never have returned.  There are just too many other options, even within the Village, let alone the rest of town.

Food:  Well-prepared but under-seasoned.  B-
Value:  Most of the menu seems overpriced to me.  Guess you’re paying for brand name and location.  C+
Service:  All over the place.  C
Atmosphere:  I really dug it, from the fountain to the lighting to the cool old music playing in the bar.  If everything else was the equal of the vibe in the place, it would be one of my favorites.  A
Final Grade:  C+