Earlier today, I was doing some reading up of reviews on the aggregate sites because I wanted sushi tonight and was trying to figure out where that was going to happen.  I ended up stumbling across a new place that I hadn’t even been aware of. 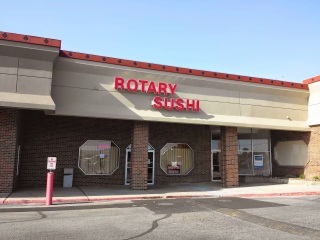 Rotary Sushi is a new conveyor belt-style sushi joint in a strip mall at Fairview and Five Mile, across the street from K-Mart.  If you’ve been to Shige Express, it’s kind of like that, except everything isn’t a dollar and there’s a lot less emphasis on deep fried stuff.

Also, truth be told I prefer the setup at Rotary.  The boats at Shige Express are cute and all, but they tend to get bottlenecked, and then there’s the whole thing about your food travelling in circles over a river of standing water.  This method is clean, convenient, and modern.  Rotary does have an actual menu, comprised of standard rolls, noodle dishes, appetizers, rice bowls, and lunch specials as well.  I stuck mainly to the sushi train this trip, and I’m going to apologize for the pictures right now.  Honestly, I’m sick of trying to wring good ones out of my phone, and I’m basically waiting until I can upgrade next month.

The free miso soup that preceded the meal was surprisingly good.  If you look in the background, you can see the pricing chart for the various sushi plates.  Well, most of it anyway.  Here’s a better look:

All the plates are color coded, and the different colors cost different amounts.

For example, those three pieces of cucumber and avocado roll set me back $1.99.  I didn’t end up trying anything in the $2.99 column. 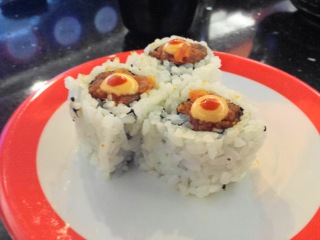 But I more than made up for it in the $3.99 column, first with the spicy tuna roll you see above…

…and then with three servings of whatever that is.  It’s spicy tuna atop a roll containing crab salad and avocado, and was easily my favorite thing of the night.  I ended up grabbing three of those… 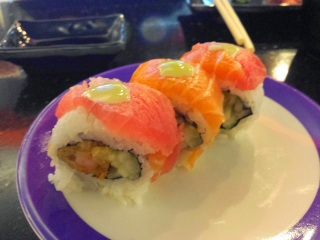 …whereas the roll you see above (tempura shrimp and cucumber, topped with tuna, salmon and dots of wasabi sauce) cost $4.99.  It was good, but I preferred the rolls with avocado because the ones they were using were perfectly ripe.  My brother and our Mom came to dinner with me, and while Mom ended up trying most of the same things I did, my brother decided to order a Green Dragon Roll (shrimp tempura, cucumber, and avocado) from the menu.

He was very happy with it, describing it as savory and balanced.  As for me, I hadn’t had this style of sushi in so long that I had forgotten these places never put eel out on the conveyor belt, and since I was determined to have some eel before calling it a night, I ordered a roll of my own.

I’m glad this was a cheap one, because those little plates add up.  Tack on a dollar for hot green tea and I was at $30 before tax and tip, but it was worth it.  I like having some variety.  The staff was incredibly nice and helpful, and the chef even told us that when it’s slow, he appreciates suggestions from the diners as to what he should be making, so he isn’t just guessing and consigning things to go in circles until they have to be dumped for freshness’ sake.  He also told me they had just gotten in some uni today, unfortunately not before I was too full to order some though.

Maybe it’s because they literally just opened, but there were no other diners there.  That makes me sad, because this concept obviously involved some serious time and money, so I would encourage all of you to check it out so they can stay in business and I can keep eating there.