The roommate and I rarely see eye to eye on the subject of music.  It’s impressive enough when we find a song we both like, but an artist?  That’s almost unheard of.  Hozier is such an artist, and when we found out he was going to be playing in Seattle (a city we also both love) on Valentine’s Day, going was a no-brainer.  Since it was thisclose to the older kid’s birthday, we would obviously have to bring her along, and since the younger child didn’t get to come on last year’s Seattle adventure we brought her as well. Both the kids love Hozier much as we adults do, and it would be the younger one’s first concert!  We debated over what time of day to leave for a bit; it would be cheaper to take a later flight and we’d get there closer to check-in time at the hotel, so that was my initial vote.  The roommate pointed out that taking the earliest possible flight meant we could do breakfast at Pike Place Market.

She knows me too well.  So, we caught the early morning flight (for all those who hate flying as much as I do, be advised that Alaska Air does serve hard alcohol on the early flights), grabbed the Light Rail downtown, dumped our bags in the storage closet at the hotel (I picked this time, and did an awesome job if I do say so myself), and hoofed it to the Market.  After what I did to myself last time (see here, here, here and here), I decided to do myself a favor: no full meals, at least not at first.  There is just too muck at Pike Place for me to commit myself to eating at only any one place when I have so little time to spend there.  First, it was back to Piroshky Piroshky.

There are literally dozens and dozens of eateries in and around Pike Place, but I think it will take many more trips there before I feel comfortable skipping Piroshky Piroshky on one.  The place just makes me happy.  I know that everyone has their own tastes and all that crap, but if you don’t like this place there’s something wrong with you.  Seriously.  Pacing myself, I talked the tween (who was literally less than a week from becoming a full-fledged teenager) into splitting a Ham, Cheese and Spinach with me, and was able to tear it in fairly equal halves without destroying it.

The roommate got one of the Potato and Cheese variety that I picked up my first time there to split with the little one, and we dined al fresco because the weather was gorgeous.

After that, we perused the main floor of the central market, where I always gawk at all the amazing seafood on display…

…and finally found ourselves at the Daily Dozen Doughnut Company… 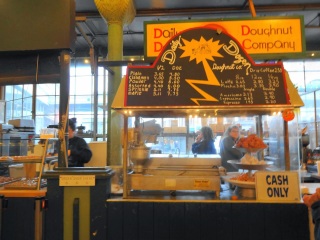 …where we got a half dozen assorted to share.

These things are great, delicious and fresh.  Nobody liked them more than the wee one though.  I later found out that she had these things for breakfast ALL THREE MORNINGS of the trip.  At this point we decided to split up for a bit.  I took the tween with me in search of her first al pastor tacos.

Los Agaves, in spite of what their website says, is open at 7:30 a.m. all week long, and as far as I know their full menu is available all day (I would recommend checking their Facebook for the most current information).  Tacos for breakfast, you ask?  Hell yes, I answer.

I don’t really dig pineapple, but I feel like I should because I love every single other citrus fruit.  Therefore, I try it in new things when I come across it.  Most of the Boise area trucks don’t put it on their al pastor tacos, but Los Agaves does.  Unfortunately, I still didn’t like it in this context, but luckily once the offending fruit was removed the things were delicious.  The tween liked them just as they are, and would request them constantly for the rest of the trip (and after we got home as well).  So, each of the children developed an obsession the first morning.  Not a bad day’s work, but we weren’t done just yet.

The “first” Starbucks is a historic and caffeine fiend destination.  I’d walked past it on my trip last year, but when we reconvened with the rest of our party I decided I wanted coffee, so we actually went inside this time.  Even though this isn’t actually the first Starbucks, it has kept the old school aesthetic, which at least makes it more interesting.

I figured I’d order a cup of Pike Place Roast because what could be more appropriate, right?  Apparently that’s a common sentiment, because they blew the carafe halfway through filling my cup.  The last thing I wanted after waiting in line was to wait even longer so they could brew a fresh batch, so the guy kept that half cup and mixed it with other brews on hand to create a kind of black coffee version of a suicide.  Weird, but it got the job done.  Around this time the non-breakfast eateries were beginning to open up, so I decided to indulge my lust for fresh seafood.

Jack’s Fish Spot is a well-regarded place to procure some grab and go seafood and they sell fresh oysters, which is just what I was in the market for.  I ordered three.

I wish I hadn’t.  I was excited when I saw them, and they were literally swimming in liquor.  Unfortunately that liquor didn’t have a lot of flavor, so maybe it was partly water as well, but that wasn’t the big problem.  Perhaps you’ve heard of gritty oysters?  Well these were downright crunchy.  I hoped the first one was just off, but the second one I actually lifted from the shell with the fork and found all kinds of little black bits hiding underneath.  I tried to scrape all of them off, but I must have missed a few.  The third oyster got tossed directly into the trash.  Feeling a little dejected, I headed around the corner to a spot I had heard about on the truly awesome blog Nomumental.  If you’re Seattle bound, I heartily recommend checking it out.  Anyway, there is an Oriental mart in Pike Place called, well, Oriental Mart.  I love Asian markets, but what drew me to this place was the fact that they have a deli counter serving Filipino dishes.  At this time, I will point you at Nomumental’s write-up, because I have absolutely nothing to say about their food.

Because they were frigging closed.  My promising morning was turning into an annoying afternoon.  With nothing else on the immediate agenda, and everyone feeling a little sluggish from lack of sleep, early morning travel and general market exploration, we decided to wander around some of the lower level shops before finally just collapsing on a nearby bench and desperately hoping that our hotel would soon be calling to advise that they had an early check-in available for us.

Finally the hotel did indeed call, so we hiked back uphill and got checked in.  The girls immediately pulled the shades and laid down for a nap.  As for me, I plugged in my phone (another half hour or so and it would have been dead when the hotel called) and lay quietly in my bed, researching eateries on my laptop.  After all, the day was only half over…