Okay, I’ve been sitting on this one for a while because…well, because I just didn’t feel motivated to do it.  But I’m trying to weed through my backlog of unfinished reviews, and I’ve had to delete so many because it’s been so long that I just didn’t remember them that well.  I just want to get caught up…

So, Merritt’s Country Cafe.  Or Merritt’s Original Scones.  Or Merritt’s Family Restaurant.  Or just Merritt’s Cafe.  It all depends on which sign you believe.  Is there anyone who hasn’t been there at least once?  Maybe your grandparents took you for breakfast one weekend, maybe it was after a concert in high school because they were still open, or maybe you needed something to soak up the booze after the bars closed.  Personally, I can’t think of one friend or acquaintance who hasn’t been there.  By the same token, I can’t think of anyone who goes there on a regular basis.  Hell, I hadn’t been there in over a decade myself when I decided to drag my Mom and my roommate’s kids out for breakfast late one Saturday morning.

Nothing much has changed compared to my memory of the place, except for things seeming older perhaps.

Both the kids went the pancake and eggs route, just different amounts to correspond to their different ages.

The kid’s menu version has the boring name of “One Small Hotcake”.  It comes with choice of meat and one egg.  The kid chose bacon and fried.  The older child got the Hungry Man breakfast, which is a short stack with a larger portion of meat and eggs, she wanted bacon as well but prefers her eggs scrambled.  Neither one of them was impressed.  The pancakes weren’t particularly good, the eggs were bland, and the bacon was somehow overcooked on one side but still managed to have thick, rubbery fat on the other.  If you can’t impress children with pancakes, bacon and eggs, there’s a problem.

Mom chose the Chicken Fried Steak, which should be a safe bet in a place like this, but she struck out as well.  The eggs were a little overdone in her case, the hash browns alternatingly mushy and crispy but a little on the greasy side.  The steak was just strange.  Nobody tries to achieve this texture when frying chicken,  It was soggy and greasy, and vaguely reminded me of something you’d see in a TV dinner.  Don’t even get me started on the gravy. 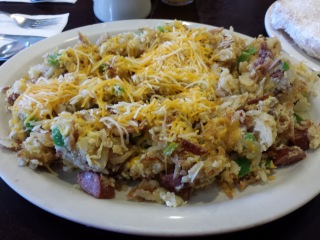 Yours truly ordered the Super Ranch: three eggs scrambled with hash browns, green peppers, onion and choice of two meats.  I picked bacon and polish sausage.  And of course it’s liberally topped with cheese.  The best part was the polish sausage.  The bacon was either over or undercooked depending on the piece, the hash browns having slightly more texture than mashed potatoes, and the eggs just disappeared into the dish.  It wasn’t even hot enough to melt the cheese on top, and overall it suffered from the same blandness as everyone else’s food.  I don’t know if they’re underseasoning to placate the elderly brunch crowd or what.  Liberal application of salt, pepper and hot sauce made it more edible, but I still ended up pushing it away half-eaten.

I know what you’re thinking; this is the part where I say I’m never coming back, and recommend that you don’t bother either.  Not the case, friends.  Why? 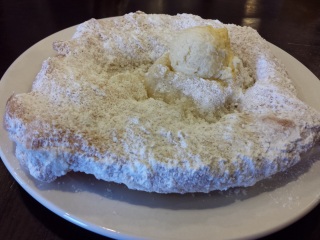 THAT’S why.  That’s a scone.  Sort of.  It’s Merritt’s version, anyway.  It’s really just fried dough, the kind of thing you could expect to get at a carnival, and they’re freaking awesome.  They have them plain, covered in powdered sugar or cinnamon.  You can get them topped with any number of fruit options, pudding, or ice cream.  And you should.  Any or all of the above.  This has to be what’s keeping them in business.  I’d forgotten how good they were in the decade or so I’d been away.  I would go back for another one of these with the slightest of suggestions.  The rest of the menu?  Eh…

Food:  Scones.  Just scones.  Forget the rest of the menu.  I wish I could.
Value:  This is a diner/greasy spoon/truck stop style eatery, and the prices are on par with that.
Service:  There were some issues here.  One I recall was that we had ordered a scone to go for the roommate who was at home sleeping.  When the waitress brought it along with the check, she set it on the very edge of the table.  Needless to say it was soon on the floor, but deemed okay because it had been sealed in a paper bag.
Atmosphere:  A little run down, but nothing surprising.
Final Grade:  C- (and that’s only because of the scones)