A while back I found out that The Kids in the Hall were embarking on their first tour since 2008.  I initially wavered back and forth about whether to go, but I still had enough money after returning from the Oregon Coast in March to pull it off.  It was going to be my first solo road trip in quite a while.  Just a man, a lot of road coffee and loud music, an evening of Canadian sketch comedy, and hopefully some excellent food.

Then Mom said that if I would like some help with gas and hotel costs, she wouldn’t mind getting out of town for a day.  That made me think that I should ask my sister if she’d like to tag along, especially since she’s a KITH fan (I introduced her to their stuff on DVD about a decade ago).  That’s when I found out that her boyfriend is also a fan.  Then my brother (yes, another fan) ended up getting back home sooner than we expected.  Long story short, on the morning of May 30th five people piled into my mother’s Tahoe at 5:30 in the morning, bound for Portland.  Half an hour at the slowest Starbucks I’ve ever seen and seven hours of mostly ugly road later (with a quick stop to gas up and see my aunt in her hometown), we arrived.  During the damned Rose Festival, when the traffic is psychosis-inducing and all the street closures render GPS about half as useful as normal, but I digress (for now).  Interestingly enough, everyone just went along with the idea of me planning out the food itinerary for the entire trip.  First stop: barbecue.

Smokehouse Tavern is the younger sibling of Smokehouse 21, and there are some benefits to venturing across the river to the newer spot; namely a parking lot, more seating, and an expanded menu.  Now there is some very decent barbecue to be had in the Treasure Valley, but not a lot of variety in terms of the dishes served.  You can pretty much always expect to find pulled or chopped pork, brisket, and ribs.  Larger menus will also contain things like sausages, poultry, tri tip, and so on.  The sides are pretty standard as well.  Being such a food destination city, Portland ups the ante a bit.  There were several options on the Tavern’s website menu that grabbed my attention, from smoked pig tails to asparagus with smoked anchovies, marrow bones with smoked trout roe, crispy chicken skin with barrel-aged hot sauce…and that’s just on the appetizer menu!  I’ve been hearing about how good pig tails are for years now, so that item was all I needed to get me in the door.

So it shouldn’t be any surprise that pig tails were no longer on the menu when I arrived.  Turns out they don’t update the menu on the website very often, because none of the aforementioned starters were on the current version when we got there (nor were the brussel sprouts with garlic confit that I had intended to order as a side).  Honestly, I was kind of pissed off about this at first.

There would be no pig tails, that much was obvious.  The appetizers that had intrigued me had been replaced by pig ear pork rinds and smoked pig head croquettes, but I wasn’t feeling those at the moment.  We started with drinks, and luckily for me their beverage menu contains a shot/beer option for $7, which consists of a can of Montucky Cold Snack and a couple of ounces of whatever their house rye whiskey is.

All of us being deviled egg fans, we couldn’t pass up Smokehouse’s hot link version at $1.50 a pop.

The yolk mixture was probably a little smoother and fluffier than I would prefer, but the flavor was great and the sausage was awesome.  These definitely got me excited enough about the upcoming meal to forget about my disappointment a bit.  My dining companions opted for sandwiches for lunch, probably because they’re pretty reasonably priced.  Little brother liked the slices of hot link on the eggs so much that he decided to have that sandwich.  My mother and my sister’s boyfriend were torn between the pulled pork and the brisket, so I suggested that they get one of each and split them.  My sister, neither a big eater or a greedy carnivore like the rest of us, shared a side of veggies with her man and tried little bits of other people’s dishes.  Of course, I went further, but let’s not get ahead of ourselves. 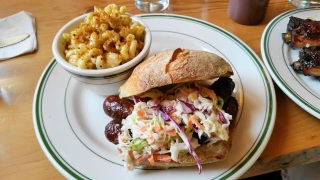 That’s my brother’s Hot Link Sandwich, which is served on ciabatta and topped with slaw.  He seemed to like it just as much in sandwich form as he had as a deviled egg topping.  He also took that picture himself since we were on opposite ends of the table.  Due to an error in communication, I thought he had taken a shot of the brisket sandwich as well, but this is sadly not the case.  Sadly mostly because the brisket ended up being a universal favorite at our table, with a couple of people even saying it was the best they ever had.  It was super smoky, juicy, and very tender, and the sandwich itself was made even more interesting by the incorporation of braised greens as a topping.

The Pulled Pork Sandwich, which unlike the hot link and brisket sandwiches is served on brioche, unfortunately did not fare as well.  Every other meat I’d tried from the place had been exemplary so far, so I cannot fathom why they would screw that up by pre-saucing in this instance.  Mom thought the pork was dry under that sauce and speculated that may have been why sauce had been mixed in, but I wasn’t interested enough to take a second bite to contemplate.  The juice on the greens mentioned above might have helped here, but the only topping on this sandwich was pickled red onion. 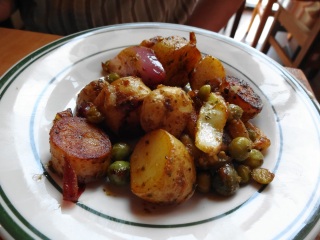 I didn’t try the assorted veggies side.  It was rife with peas, and I loathe peas.  Moving on… 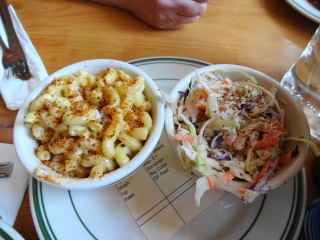 As for my own sides, I wasn’t particularly fond of them.  The Macaroni and Cheese, which is made with a three cheese blend, bacon, and cornbread crumbs, was clearly the better of the two.  One of those three cheeses has to be ricotta, at least so far as I could tell by the texture, and it was surprisingly light on flavor.  But that was nothing compared to the Coleslaw, which was soggy and bland and tied for everyone’s least favorite food item of the entire trip.

Luckily I had a backup side, due to Smokehouse’s policy of selling ribs a la carte for $2.50 a pop.  How was it?  Just look at it!  Meat is definitely where it’s at here.  And while we’re on that subject…

Since I wasn’t getting my pig tails, I decided to just be as decadent as possible.  You can choose three options from any of a number of proteins for the combo plate, priced at $22.  I picked things you don’t typically see on barbecue menus in the Boise area, namely pork cheeks, chicken-fried sweetbreads, and smoked steelhead.  The cheeks were terrific and I only wish I had gotten a picture of one from the inside, with its fork-tender texture and deep smoke ring.  The steelhead was obviously quality smoked fish, no complaints there.  The sweetbreads, well, those are an interesting item.  They can be either the thymus glands or the pancreas of a veal calf or a lamb, or sometimes even a pig or a cow.  The menu didn’t specify which these were or what kind of animal they had come from.  That being said, I liked them quite a bit.  They were tender and almost creamy in texture, with a lovely golden coating. 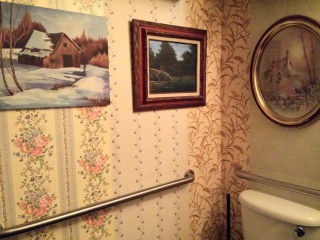 At my sister’s request, I am posting the above picture of the bathroom at Smokehouse Tavern, which she liked because of the crazy haphazard wallpaper and the toilet flushing mechanism, which includes a button to flush lightly for number #1 and more strongly for #2, and which would have convinced me I was in the Pacific Northwest if nothing else had by this point.  Anyway, I highly recommend Smokehouse Tavern.