Recently we celebrated my mother’s 60th birthday.  Mama wanted steak, and I decided she was gonna get it.  The question: where?  The last time I tried to take her out for a steak, the place literally served her a slab of raw meat.  She isn’t fond of “stuffy” places, plus we had kids with us, so that ruled out the higher-end joints downtown.  So we needed a place that was casual, kid-friendly, had more options than just NY strip or filet, with bonus points the closer it was to Meridian.  After a fair amount of research I decided on a place that satisfied all of those requirements, with the added incentive of 50% off the birthday girl’s dinner. 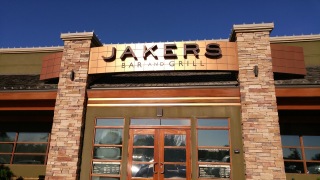 Jakers Bar and Grill is a five outlet chain located exclusively in Idaho and Montana.  The guy who started it is also a Red Robin franchise owner, but let’s not hold that against him.  The whole “bar and grill” thing is a pretty standard term, and is no guarantee of what you’ll find on a particular menu.  I’ve seen bar and grill menus that have just one steak on them, where Jakers has five basic options.  That “basic” is important, because there are variations within them: two entirely different kinds of sirloin and three different ribeye cuts, for example.

Mom, my younger brother, my niece, both of my roommate’s daughters, and of course your not-so-humble blogger showed up at about six o’clock on Friday evening.  All the way there I had worried that a reservation might have been a good idea, but we were seated almost immediately since the majority of the patrons were crammed into the lounge for happy hour.  We placed our drink orders and perused the menu.

Mom doesn’t love other people spending money on her, but using the birthday excuse and the accompanying 50% discount I was able to convince her to order one of the most expensive steaks on the menu, the Kobe Sirloin.  I was still on the fence about steak (lots of bad experiences in the past), so I took Mom’s recommendation for the Seafood Linguini.  My brother and the teen chose burgers, while both of the wee ones opted for wee steaks of their own.  Yes, steak is available on the kid’s menu, as are mocktails which is freaking adorable, but they stuck with soda this time. 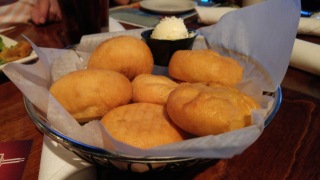 Fries come with the kids’ steaks and the burgers, so the first things to hit the table were a complimentary basket of scones with honey butter, Mom’s salad, and my soup.  You gotta love complimentary bread.  Not only is it a nice touch but, if you don’t have a side that arrives before your entree, it gives you something to keep you busy.  The scones were piping hot (as in you could see a little steam escaping when you tore them open), perfectly golden brown, and most importantly not overly greasy. 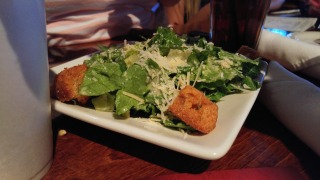 Mom’s Caesar salad (Can you tell I was quickly trying to snap pics before plates were disrupted?  Perils of dining with a large group.) was, by her description, pretty standard.  It was garnished with a good amount of grated cheese and wasn’t overly heavy on the dressing.  She pushed it away at about the halfway point so she could save herself for the big game, but the teen happily polished it off (she developed a taste for Caesar on our recent trip to Seattle).

In retrospect I probably could have used some green veggies myself, but I selected the lobster bisque as my side because lobster is one of the few types of seafood that DON’T come in the linguini I ordered.  The soup was good, subtly flavored and not fishy at all, but maybe a bit on the thick side.  More like a chowder than most bisques I’ve sampled.  There were also chunks of lobster the size of small scallops in it, so that’s a plus. 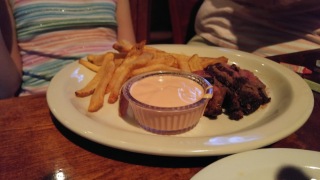 According to the menu, kid’s meals are supposed to arrive accompanied by carrots and celery with ranch dip.  We never got those, but it was no hardship.  These kids would have pushed aside that stuff with plates of meat and fries awaiting their attention.  I didn’t get a good picture of my niece’s meal (I was just trying to get a picture at all before she ate any more of the fries), and I didn’t get a picture of the other kid’s meal at all because the roommate’s youngest ordered her steak well done, which just makes me sad.  Interestingly enough though, it arrived not much more done than my niece’s medium rare plate.  In fact, we had a hard time telling them apart, but a quick re-fire set things right.  If you can consider well done steak “right”.  I digress.  Anyway, check out that ramekin of fry sauce!  I’ll take that over a tiny plastic cup or squeeze packet any day.  Both kids ran out of the helpfully pre-cut steak long before they ran out of fries and were none too happy about it, and if that’s not an endorsement then I don’t know what is.

The burgers were, unfortunately, much less successful.  The teen is in that awkward stage where a kid’s meal doesn’t satisfy and which at the age of thirteen she’s not really eligible for anyway, but she can’t really finish an adult portion either.  Jakers’ oddly named appetizer menu to the rescue!  I say oddly named because appetizer menus generally contain things good for sharing, and a cheeseburger is an odd choice for an appetizer.  She ordered medium rare, but the end result looked pretty medium well to me.  The appetizer cheeseburger is pretty standard, with the menu only describing it as coming with American cheese and pickle.  It showed up with lettuce and tomato as well, which irritated the teen because she likes her cheeseburgers plain and figured asking them to hold the pickle would accomplish that.  The bread was too thick, the cheese softened but not really melted, and the patty itself in desperate need of seasoning.  Of course you can add salt and pepper yourself, but when a youngster says your burger is bland that’s pretty damning.  Giving credit where credit is due, she took the picture herself.  We had six people wanting to start eating, and with time being of the essence I just tossed her my phone.

My brother picked the Some Dude’s Burger (yes, like the fry sauce), which arrived with smoked chipotle cheddar cheese, bacon, lettuce, tomato, avocado, and of course fry sauce.  He described it as being wet and with meat so bland he couldn’t taste it among all the other ingredients.  He’d ordered his burger medium, and it was considerably pinker than the teen’s.  Maybe the patties got switched?  The garlic fries were pretty wet as well, with a puddle of butter, chopped garlic and herbs pooled under them.  I meant to try one, but by the time I thought about it again they were gone.  Considering the fact that this burger is almost double the price of its “appetizer” counterpart, I would have assumed the patty would be noticeably bigger, but that wasn’t the case.  If you take nothing else away from this review, at least remember this: DO NOT ORDER A BURGER FROM JAKERS. 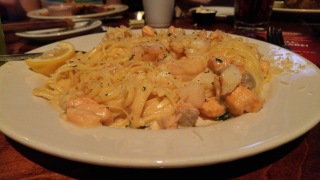 As for me, Mom’s recommendation panned out.  That pile of creamy, pinkish-beige goodness you see up there is the aforementioned Seafood Linguini.  Said linguini is tossed with Alfredo sauce and a variety of seafood (shrimp, crab, scallops, cod, and salmon) sauteed in herbed butter and white wine.  The Alfredo, something I’m kind of sketchy about, wasn’t overly creamy, and each type of seafood had its own distinct texture and flavor.  None of them were “fishy” tasting.  Also, there was a LOT of seafood, as in there was still a fair pile of it left after I’d finished the noodles.  Considering the portion and the quality, I’d say this was a damn good deal at $21.95, but if you want to save yourself some scratch you can get a smaller portion at lunchtime for five bucks less.

For once I’m not talking about my food last, but I was not the guest of honor nor did I order the best dish.  The Kobe Sirloin, ordered medium rare, arrived seared and beautifully caramelized with a side of mushrooms (not mentioned on the menu).  You could tell by looking at the little plate it arrived on that it was still spitting when they took it off the grill to rest.  She chose a loaded baked potato (cheese, green onion, sour cream, and chopped thick-cut bacon) as her side.  I didn’t think to ask her how the potato was with everything else that was going on, but according to their website Jakers takes their taters seriously.  Call it the effect of being an Idaho-started business.  They actually coat the skins in bacon drippings before baking them.

I’m sure the potato was fine, but it was the sirloin that was the star of the show.  I know this because I tried it, as did everyone else at the table (the little ones practically begged for more).  This is the steak that finally convinced me that steak is a worthwhile dish.  That picture is not an optical illusion.  If it looks like the meat is melting, that’s because it practically was.  The Kobe, sourced from Snake River Farms, is a blend of Wagyu and Angus cattle, heavily marbled and buttery in texture when cooked.  Absolutely fucking amazing.  As soon as I got home, I signed up for Jakers VIP club myself, because I intend to get one of those for my own birthday in a couple of months.

Unfortunately we had to skip dessert as everyone (aside from the two unfortunate souls who ordered burgers) was overstuffed with rich and decadent foodstuffs.  Too bad, that Cinnamon Roll Sundae sounds promising.  Like I said though, I’ll be returning to Jakers.  And soon.

Food:  Amazing steak, great pasta, good sides, shitty burgers.
Value:  It’s not a cheap place, that’s for sure.  Even with the b-day discount, the bill was $112 before tip.  Still, there are relatively inexpensive options, especially during happy hour.
Service:  Obviously we had some meat temperature difficulties on the less expensive items.  Can’t be sure if that’s a waitstaff or kitchen issue, though.
Atmosphere:  I dig it.  Subdued lighting but not dark, lots of wood, music not too loud, and you can spread out at a spacious booth or table and enjoy the show through the lounge windows.  Seriously, during happy hour it’s liked an overstocked fish tank in there.
Final Grade:  B