I spent the first couple of years of the new millennium living in Upstate New York.  Unfortunately, I was a much different person then, especially in regards to food.  I was surrounded by options I’d never had before, and as a rule I ignored them while my then-girlfriend and I made the rounds of various fast food joints, with the occasional special trip to a brewpub.  Hell, I lived upstairs from a Jamaican restaurant that I never crossed the threshold of!  I’m still kicking myself about it.

This isn’t to say that I have completely abandoned all fast food (I’m just much more selective about it now, and have it much less often) or that I didn’t come West again without any new edible interests.  I left NY with new tastes for haddock (fish fry Fridays!), beef on weck sandwiches, NY style pizza, and frozen custard.  Luckily I had Stan’s to fulfill most of those cravings for a while, but then they closed up shop.  While the Valley is still sorely lacking on weck and good fish fry options, frozen custard finally made a comeback with the opening of Freddy’s Frozen Custard & Steakburgers last year.

Okay, so Freddy’s isn’t the only place in town you can get custard, but I wouldn’t set foot in the other place if they comped me a year’s worth of free meals, so they might as well be the only one as far as I’m concerned.  You can pretty much tell what Freddy’s specialties are by their name (click for their explanations of Steakburgers and Frozen Custard), but there are a few other options as well, such as chicken sandwiches and hot dogs that appear to be wrapped in grilled bread (I haven’t tried one yet).

Describing their burger style is…well, let me put it this way: have you ever had a smashed burger patty?  You know the edge pieces that get really thin and crispy/chewy?  Imagine a whole burger patty like that.  It’s not always what I want, but it’s pretty freaking good in its own way.  Freddy’s has them available in single through triple, but I’ve always found the double to be the sweet spot. 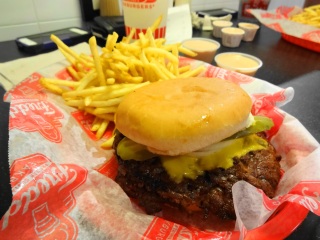 Burgers are served in two base styles: Original (mustard, onion, and pickle) or California Style (Freddy’s sauce, cheese, onion, lettuce, and tomato).  Both come on butter-toasted buns, and customization is possible (cheese on the original, bacon, and so on).  The fries are more of the shoestring than the traditional variety but they’re done right, with a crispy outside and still some softness in the middle.  The fries are dusted with a proprietary seasoning blend that’s very reminiscent of seasoned salt, just as Freddy’s Sauce isn’t very far removed from fry sauce.  Both of these condiments are available for self-serve, along with ketchup, in the dining room.  I recommend going inside for this reason, because the drive-through never gives me enough of either for my taste.  As to which of the burger styles I recommend…honestly, I switch back and forth every other visit.  Oh, one more thing about those fries…

Though the fries are good, they’re small and that makes them a little difficult to eat.  They lend themselves very well to being eaten with a fork, which is where the Chili Cheese Fries come in handy.  Topped with beanless chili (the only kind that should ever be used as a topping, in my not-so-humble opinion), diced raw onion, and a jalapeno cheese sauce, these are pretty highly addictive.  I would normally prefer real cheese, but at most fast food joints that would mean a square slice of that stuff that passes for cheese at such establishments.  I’d rather have the sauce. 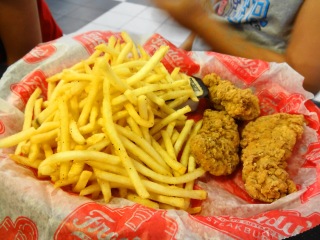 As per usual, we can’t get the roommate’s youngest away from the chicken, even at burger joints.  At least the ones at Freddy’s are decent, not too greasy, nicely crispy on the outside, and real chicken breast on the inside. 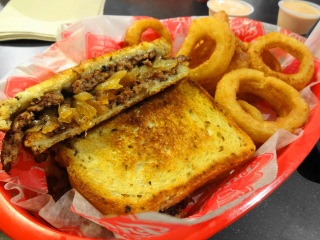 Another interesting option is the Double Patty Melt, served on grilled rye bread with Swiss cheese and grilled onions.  You don’t often see a fast food version of this, so it makes a nice change of pace.  Their onion rings are surprisingly decent.  For a place that fries and grills pretty much everything, the grease factor is remarkably well controlled.

There is also generally a special item of some kind available.  Currently it’s the Italian Beef sandwich, something that isn’t unheard of around here but which is generally not done well.  Of the four places I’ve tried it in the Valley, I’m surprised to say that Freddy’s was my second favorite.  It’s not as bursting at the seams with roast beef as it should be, but they do serve it on an appropriate roll with your choice of “zesty” (I would prefer “hot”) giardiniera, or sweet peppers.  I opted for the sweet peppers this time.  Freddy’s also gets bonus points for asking if I wanted the sandwich dipped, wet, or with the herbed au jus on the side (I picked on the side since I was taking it to go).

Oh yeah, the custard.  Freddy’s frozen custard is a harder variety than Stan’s used to serve, and is also only available in the standard chocolate and vanilla varieties.  You can get it plain in a dish or cone, as a concrete (with a mix-in), or as the base of a sundae.  There are 27 toppings/mix-ins to choose from, as well as some pre-set combinations like turtle or Hawaiian.  If you don’t feel like mucking with a spoon, they can also turn that rich creamy goodness into a shake or a malt, which I highly recommend.

There are currently four Freddy’s locations in Idaho.  I haven’t been to the Caldwell or Idaho Falls branches, but I’m pretty sure the Meridian (on Eagle Road just north of Franklin) and Nampa (in the cluster of businesses across the freeway from the Idaho Center) spots are owned by different people.  I assume this because when you order a meal at the Meridian location you just get a meal, but every time I order one in Nampa they ask specifically what size of fries and drink I want.  The food is consistent both places though.  It’s a fast food joint, yeah, but something of a unique one.  Plus, it’s definitely the right weather for frozen custard, so no better time to check them out!

Food:  Fast, but somewhat unique and pretty tasty.
Value:  Very reasonable.
Service:  Given the nature of the business, you won’t interact with them much.  They’ve always been pleasant in my experience.
Atmosphere:  They lose some points with me for the faux-50’s vibe, harsh lighting and overly loud PA system.  After my first couple of visits, I’ve always taken my food to go.
Final Grade:  B+