After we checked out of the hotel the following morning, it was time to once again feed my constant dim sum craving.  After good but still somewhat lacking experiences in Seattle earlier this year and at a different place in Portland last year, I finally returned to my first love.  The actual name of the joint is Wong’s King Seafood Restaurant, but the only seafood I’ve ever eaten there was served in dumpling form.  They have two locations (the second is in Estacada), but the Portland branch is the only one I care about because that’s the one that serves dim sum from 9:30 a.m. to 3:00 p.m. seven days a week.  I could go on and on about this place but, as this post is already so lengthy, I’ll let the pictures do most of the talking.  Mostly. 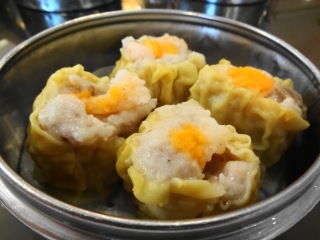 Chicken and shrimp shumai.  This one continues to be everyone’s favorite, to the point where we basically just grab a basket for each person as soon as the cart comes around.

Shrimp dumplings with cilantro, though it should be the other way around because the cilantro is mostly what you taste.  Not recommended unless you’re really into that.

Har gow, probably the second most popular dumpling overall, and one that’s considered something of a measure of dim sum chefs.  They didn’t hold together as well as they should, and the dough is probably a bit on the thick side, but they’re still delicious. 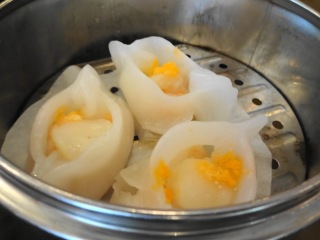 Shrimp and scallop dumplings, a nice way to shake things up from the primarily pork and plain shrimp offerings. 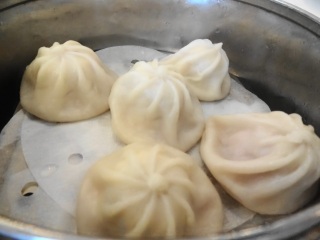 Xiaolongbao, a pork meatball suspended in aspic which melts into soup as the dumpling is steamed.  I think I ended up ordering three baskets of these (yes, I shared) because I was enjoying them so much, though I do recommend nibbling a little hole for the steam to escape for a moment, otherwise you’re likely to scald your mouth.

Egg rolls, mostly just to break up the textures a bit.  Plus, everyone loves them.

Fried shrimp dumplings.  I don’t really recommend these, but it might have mostly to do with the mayo-based sauce they were served with.  Overall, I prefer the steamed varieties, though I would have ordered some shrimp balls if they had come around while I was still hungry.

Ah yes, chicken feet; the “dare dish” of dim sum.  With my brother there we finally had someone who actually wanted to try it, so we ordered some.  Everyone ended up trying them except for my sister, and most of us wished we hadn’t.  It’s basically like chicken skin soaked in sauce, and perhaps they would have been more popular had the sauce been more flavorful.  I won’t order these again.

Finally, the seaweed seafood roll, all kinds of minced fishy goodness mixed with and wrapped in seaweed before being deep fried.  This is one of my favorite items there, and it always seems to come around just as we’re wrapping up.  Because the restaurant was considerably less busy than on my previous visits, the roll was still hot when it got to our table.  And I had thought it was supposed to be a cold item!  A nice way to wrap up my first time back since 2011. 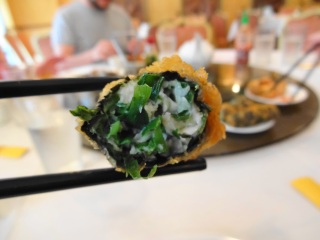 The picture of the bean curd roll was too terrible to share, and I somehow missed getting one of the shrimp and chive dumplings, so you’ll just have to use your imagination.  Stuffed and happy, we drove to Beaverton to stock up on Asian edibles at Uwajimaya (grapefruit “Sweat”, ramen crisps and rice candy, yum!) and drop off sis and her boyfriend, who flew back home a couple of days later.

Then it was just my mother, my brother, and I on the drive home.  Sure we hit 7-Eleven for Slurpees…twice…and stopped at my cousin’s house for visit and a bite, but the insane whirlwind vacation was obviously over.  Most people I know seem to have a strong preference for either Portland or Seattle, but I love them both mostly equally, albeit for different reasons.  It’s pretty much inevitable that I’ll wind up living in one of them in the next few years.  In the meantime, I guess I’ll just keep flipping a mental coin and visiting both as often as I can.