EDIT: This is now Kizuki Ramen & Izakaya.  Apparently Kukai sounds too close to Hawaiian slang for poop or something.  You learn something new every day…

Okay, okay, I know.  Once again I’ve gone months without an update, and once again it’s not due to lack of trying new places so that means I’ve got a major backlog.  I don’t know what to tell you.  Everything has been crazy, from upheaval in my personal life to Halloween (and the subsequent lesser holidays) to Black Ops III to the nasty cold I’ve been trying to kick for almost two weeks now.  Often, when something in my life has to be pushed for lack of time, it ends up being this little hobby.   But considering I’ve only posted one update in the last four months, it’s probably time.

Now for the bad news:  This is another on the road piece which are historically the least popular, but that’s because since I’ve been sick this place is the one I’ve most wished I could magically transport myself to.  I promise I’ll be mixing up the order rather than posting my reviews chronologically for the next little bit, so at least you won’t have to read about several out of town eateries in a row before I get back to the locals.

But hey, speaking of local eateries:  Why the hell does Boise not have a ramen-ya yet?  I long ago gave up on having any authentic regional Chinese cuisine here, but the abundance of sushi and teriyaki and even teppanyaki joints would seem to indicate we kinda like Japanese eats, and what is more quintessentially Japanese than ramen?  There are a few half-assed attempts at a bowl here and there, but nothing like you can find a state away. 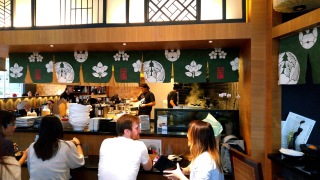 Beyond the local noodle joints in Oregon and Washington, some chains from Japan have actually been opening spots there.  Kukai Ramen & Izakaya is one of these.  I ran out of time to try them in Seattle when I was there in February, then got really excited when I heard they were opening in Beaverton when I was going to Portland in May only to have them not open to the public until a couple of days after I had left.  In August the ex-roommate and I decided to treat ourselves for our birthdays by getting a last road trip in, hitting Portland for a day before moving on to the Oregon Coast.  I wasn’t missing Kukai again.  I went all that day without eating in anticipation.  We actually spent the night just over the Washington border so Ms. Golden Rule could see her bestie, but I had no compunction about driving to Beaverton for some ramen. 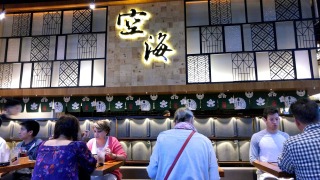 Kukai, interestingly enough, has no kid’s menu.  I warn you because this might be an issue for some.  It wasn’t for myself and the human black hole sitting across the table from me.  Our helpful waiter suggested that the kid and I share one of the larger bowls, but he clearly didn’t know who he was dealing with.  I ordered the Tonkotsu Shoyu variety for my small companion, and opted for the house favorite Garlic Tonkotsu Shoyu for myself.  I couldn’t resist tacking on a Japanese Pork Bun to start, because I’m me.

I’m unsure whether the Japanese Pork Bun is usually split in half, or whether this was done for ease of sharing.  Honestly, I hadn’t intended to share this with the wee one, who would soon be facing an adult-sized portion of noodles in rich pork broth.  Besides, I wasn’t sure whether she would even dig the fatty pork belly or the steamed bread.  Of course since there were two of us and two pieces of food on the plate, she asked if one was for her, and her enthusiasm made it impossible for me to say no.  After warning her about the fattiness of the meat and what to expect from the texture of the bread, I passed the smaller piece to her.  I was in love, and the little one has mentioned these several times in the months since our visit.

These buns were perfection.  The bread was just right, the pork belly amazing, and the cucumber and scallions tamed the fat and starch just enough.  They came with a trio of sauces: hoisin, mayo, and Japanese mustard.  All were very decent, but I was personally most fond of the mustard.

On to the main event.  The little one couldn’t have cared less about the bamboo shoots and the various greenery, but she loved the braised pork, the noodles, the tonkotsu broth, and maybe especially the egg.  Even after the appetizer, she managed to polish off almost the entirety of her adult portion of ramen.

As for my Garlic Tonkotsu Shoyu variety…well, this is going to seem like I’m damning them with faint praise.  The pork belly was as terrific as it had been on the buns.  The roasted seaweed, the bamboo, the scallions and sprouts and peppers all just fine.  And that egg…

Seasoned and boiled just until the white set and the yolk was left soft and custardy, the egg was indeed amazing.  My issue was with the broth.  Well, issue isn’t the right word.  See, I haven’t had a decent bowl of ramen since my trip to Seattle a couple of years ago.  I had some mediocre stuff in Spokane after my cousin’s wedding, but it didn’t really hit the spot.  This was good but, true to its name, very rich and garlicky.  You see all those little white bits?  That’s garlic.  I sampled the standard tonkotsu broth from the kid’s bowl, and it turns out that’s what my taste buds were craving.  I’m sure if I lived someplace where I could get truly good ramen on a regular basis, I’d be happy to try out all the specialty varieties, but since it’s a once every year or two occasion I’d probably be better off sticking to the classics, lest I end up envying my neighbor’s bowl again.  Either way, I heartily recommend Kukai if you happen to find yourself in Seattle or Beaverton.

Food:  Wonderful, just follow your heart (and taste buds) when it comes to selecting the style.  Don’t just get the most interesting sounding one in the name of a more impressive blog post.
Value:  Hard to tell.  Some might balk at paying twelve bucks for a bowl of noodles and broth (even though the broth has been simmering for ten hours).  I am not one of those people.
Service:  Exemplary, very friendly and helpful to someone who is still basically a neophyte.
Atmosphere:  Authentic without being kitschy, classy without being stuffy.  More perfection.
Final Grade:  A