The sandwich is a wonderful thing.  From the majestic simplicity of the grilled cheese or the PB&J to the iconic BLT, torta and Cubano, cramming stuff between two hunks of starch results in everything from comfort food to art form.  The Valley certainly has been seeing a boom in sandwich joints lately, and while many are admittedly chain eateries, not all chains are created equal.  A couple of days ago I had the pleasure of attending the soft opening of Boise’s newest entry in the sandwich scene, Salt Lake City-born Even Stevens.

There is plenty of information out there about Even Stevens’ business model, including in our local press, so I’ll just give you the TL;DR version: at the end of each month, Even Stevens tallies up their sandwich sales and banks funds to purchase supplies for making an equal number of sandwiches to donate to people who could really use a sandwich.  If you’d like it stated more eloquently, you can see more details here.
Of course it means you’re probably paying a little (but not much) more for your meal than you would for the equivalent at a different eatery, but hungry people are being fed and that allows non-profit groups to save some money towards other necessities.  I don’t know about you, but that makes more sense to me than the “pay what you can” eateries that have been springing up over the last few years.  Of course, none of this means a damn thing if the food isn’t any good. 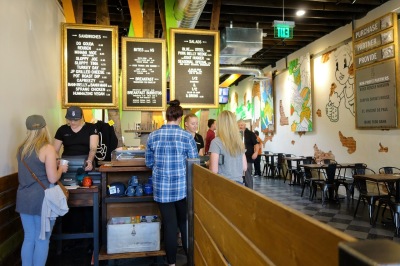 I dragged my feet on my way up to the small ordering counter while perusing the menu, pretty sure I wanted the Pot Roast Dip (turkey pot roast, Swiss cheese, red onion, and jalapeno jelly on baguette with a side of au jus), but as so often happens at these new places an employee approached with a smile and a suggestion: the Banh Belly.  As you might guess, that’s the Even Stevens riff on a banh mi.

Now I often balk when a non-ethnic specialty eatery makes an iconic ethnic dish, and pork belly (the central ingredient) wasn’t really grabbing me because I’d just eaten a pork belly and kimchi fried rice burrito a few days earlier (more on that in an upcoming post), but I took another look at the menu and saw that the sandwich in question was also available with mahi mahi (called the Banh Mahi, natch).  That made me curious.  I’ve had several different kinds of banh mi in my time, but none involved fish.

I placed my order and headed out to the patio, since the weather was nice enough for it.  More employees made the rounds, giving out stickers and keychains, and even samples of cookies from Sweet Valley Cookie Co. in Eagle.  I need to make it out there, their lemon cookie is outrageously good.

Where was I?  Ah yes, the food.  Most of the banh mi you’ll find around town is pretty straightforward protein, pickled veg, fresh jalapenos, and cilantro, served on baguette.  The Even Stevens version has either the aforementioned pork belly or mahi, pickled slaw, roasted jalapenos, cucumber, cilantro, and garlic aioli, all on toasted baguette. 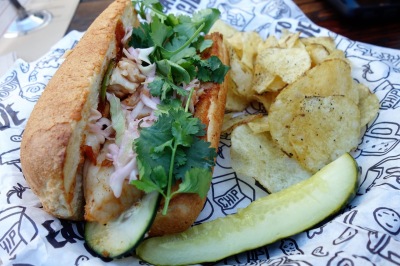 It’s hard not to draw comparisons when trying a new take on something you already love, so I’ll just say that while the slaw was decent, I missed the crunch from the lightly pickled carrot and radish that you usually find in these things.  The cucumber helped, but it wasn’t the same.  The toasted baguette was a very nice touch (I’m a sucker for grilled or toasted bread), the roasted peppers familiar and unique at the same time, and most importantly there was enough fish that it didn’t just get lost among all the other ingredients.  There’s definitely a little spiciness here, so beware if you’re kind of wimpy about that (trust me, I used to be).  All in all, a very solid sandwich at a reasonable price point when you consider the quality of the ingredients.  Plus, they seem to be big on sourcing things locally when possible, so there’s another good cause you’re helping out when you come here.  Even Stevens opens to the public today, and I definitely recommend checking it out.
Food:  Yummy.  Already planning my return visit.  I still want to try that Pot Roast Dip, and the Party Tots (covered in cheese, bacon, and avocado) sound freaking amazing.  They also have veggie and vegan options, if you’re into that sort of thing.
Value:  It ain’t cheap but it’s not terribly expensive either.  You’re getting what you pay for, in more ways than one.
Service:  Friendly, knowledgeable, and they seem very interested in what they’re doing and why.
Atmosphere:  Unusual.  Definitely a little hippie-ish, but then there’s the ceiling-mounted TVs and neon signs.  Some of the artwork is a little garish as well.  I was happy it was patio weather.
Final Grade:  A