Okay, this is going to be such a quick one that usually I’d go back for a second visit to pad it out, but it’s a means to an end so bear with me.  Tonight from 5-8 pm is the second weekly installment of Food Trucks in the Park at Ann Morrison Park downtown, courtesy of Idaho Food Truck Coalition.  I went last week, when unfortunately the weather wasn’t welcoming and the turnout was kind of sparse.  As I walked the line of trucks, they were pretty evenly split between trucks I had already written about and trucks I hadn’t yet visited.  However, there was only one truck I had visited but had not yet written about, so it seemed like a good time to remedy that. 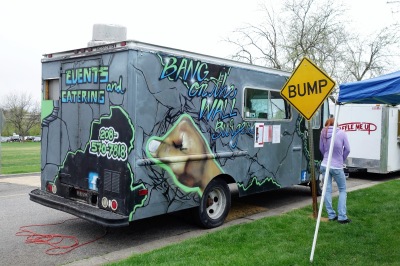 I first encountered Bang on the Wall Burgers almost two years ago while they were doing a dinner service outside Payette Brewing‘s tasting room, and had their seriously amazing Super Bacon Cheesy burger.  Unfortunately, later that night I got incredibly ill.  NO, it wasn’t them.  It was what I had for lunch that day, and damnit I thought it seemed off at the time but blamed it on funky seasoning.  I’m not going to name names because I can’t prove anything, but there is a certain chain of pseudo-fast food joints I will NEVER eat at again…it’s really kind of funny that on the rare occasion when I feel out of sorts after eating something, it was from a fast food chain, but I digress.  I will spare you all the gory details, suffice it to say that the last thing I wanted to do at the end of an incredibly miserable three day weekend was to write about anything I had eaten the day it all started.  I tell you this for two reasons: to explain why it’s taken me so long to get around to reviewing a burger truck, and to warn you to be wary of any place that drops a pile of what looks like white trash guacamole on top of your salad when you ask for avocado.

Anyway, last week was the first time I actually found myself face to face with BOTW since all that.  It was time.  Plus, there was the good deed factor. 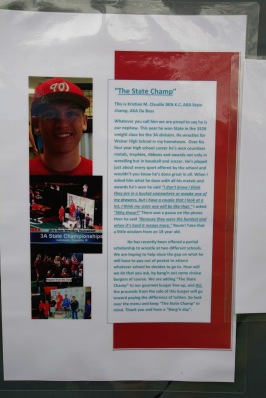 If you don’t feel like reading all of that, it breaks down like this: the truck owners have a nephew who has been offered partial scholarships at two different schools, and their way to be supportive was to have the kid design a burger which the truck would sell and which the kid would get the proceeds from.  So, what kind of burger does a teenage athlete create?

Of course.  Double meat, a little extra meat in the form of ham, cheese, cream cheese (with jalapenos!), and pretty much every standard burger topping you can think of (except pickles for some reason), plus “lots” of fries.  So I get a double burger AND help a kid get an education?  Fine, twist my arm.

I was pretty impressed with the fries, which I hadn’t been able to try on my first visit because they were sold out.  They reminded me of McDonald’s fries in shape and texture, and luckily unlike McDonald’s fries they didn’t suffer from being overly salted or having strange flavoring agents added.

That’s not a very good picture of the burger, I know.  Unfortunately I wasn’t able to get one from a different angle, because as soon as I picked it up the cheese, ketchup, mayo, mustard, and tomato underwent a seismic shift and all tried to slide and/or squirt out from between the bun halves in different directions.  It took two hands to corral the thing while I ate it, and I ended up making a mess of both hands and shirt (trust me kids, ALWAYS carry extra napkins in you glove compartment, sooner or later they will save you).  Clothing risk aside, that kid put together a tasty combination.  The patties had a nice sear/crust but were still juicy, the cheese was actual cheese, the ham was thin and very nicely grilled, the onions crisp, the tomatoes firm and ripe, the lettuce well-restrained because if I wanted a salad I’d order one, and the cream cheese (the thing I was most dubious about) wasn’t overwhelming and turned out to be a good balance for the kick from the jalapenos.

All in all, a good burger for a good cause, and if it sounds like something you’d enjoy then you can get it tonight at Ann Morrison Park.  You may want to ask them to go a little lighter on the sauces but hey, it’s your life.  And your clothing.

Food:  Without a doubt the best burgers I’ve ever had from a truck, and would give a lot of brick and mortar joints a run for their money as well.
Value:  Probably about what you’d expect, plus there are some unique options available.
Service:  No complaints here, and they were so happy that someone ordered the special burger that they wanted to take my picture with it.  I politely declined, but if you’re more fun than me you’ll probably find yourself mugging on their Facebook page.
Atmosphere:  I don’t rate this for trucks, but the park is always nice.
Final Grade:  A