At the beginning of this month my employer moved our offices to Nampa, a place I haven’t spent any serious time in since I was a kid and Karcher Mall was the epitome of local shopping.  In preparation for the move, I started researching eateries within a small radius of the new office.  I already had a list of almost a dozen when, a few days before the move, I accompanied my roommate to Nampa for a factory recall repair on her car.  I brought my own car along so we wouldn’t be trapped in the dealership waiting room, and we decided to drive around and take a look at some of the places I’d been researching.  On our way back to the dealership, she suggested taking a quick detour through the little shopping complex around the Edwards theater across from the Idaho Center, and that’s where we came across Royal Bakery & Cafe.  I pretty much fell instantly in love and decided that they would be my next review.  And yes, for those of you who pay attention to these things, they are the place that Boise Weekly wrote up this week.  The place has sat there for YEARS, and the Weekly publishes a review at the exact same time that I’m working on one?  What are the odds?!

I’ve mentioned this before, but I don’t like posting a review of a place that someone else has just written up.  I may have visited a place three times in the last two weeks and be in the midst of my writing, when suddenly the Statesman or the Weekly publish a piece on it.  Maybe it’s silly, maybe not, but it just sucks away my enthusiasm for it.  I don’t want to come across like “I saw someone else’s review, it made me want to try the place, and now here’s MY review.”  In these rare cases (there are few enough people writing about restaurants in the Valley that it doesn’t happen that often), I usually just wait a couple of months before posting my write-up.  Still, I suppose it was only a matter of time before the luxury of that choice was taken away from me.  You see, the Weekly’s piece on Royal Bakery ended with the information that the proprietor is considering closing down in a couple of months to focus on catering and studies so if I wait a couple of months I may very well be posting an “in memoriam” review.  I want them to be tempted to keep their doors open, and if I can lend to that by drawing some attention (and hopefully business) to them, then that’s what I’ve gotta do. 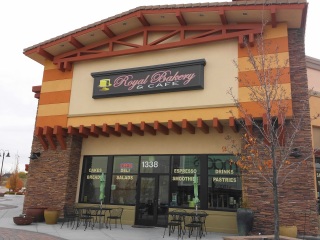 There’s no trivia I can tell you about the woman who runs the place that the Weekly didn’t cover, but I can tell you that she’s a total sweetheart and obviously takes a lot of pride in what she does.  She has people helping her (based on accents, I’m going to guess they’re family), but three of the times I’ve been there it’s the same women running the show.  I have no charming anecdotes about this place, so let’s see some pics, eh?

The first thing I tried from Royal was their breakfast Sausage Crepe: egg, red bell pepper, onions, and gluten free chicken sausage, all wrapped up in a crepe like a breakfast burrito.  I could care less about whether the sausage is gluten free, but it’s freaking tasty.  That intriguing-looking pile of deliciousness in the foreground is a layered salad of beets in some kind of creamy sauce, carrots, eggs and shredded potatoes.  My experiences with beets have been largely negative, so I was pleasantly surprised to find that these had none of that “earthy” (read: like eating dirt) flavor that I’ve encountered before.

The beef piroshki surprised me a bit, it’s certainly not much like what I had in Seattle, but I suppose that could boil down to the differences between Russian and Ukrainian preparations of the dish.  The salad is a pretty standard mix, but the rest of the sides are considerably more special.  The smaller pile in the foreground of the above pic is a mix of cheese, carrot and garlic that a co-worker described as being like someone “tried to invent the perfect use for garlic, and this is what they came up with” if I recall correctly.

As for the piroshki itself, the breading (I’m hesitant to use the word “crust”) is soft and fluffy, but still strong enough to restrain the generous amount of finely ground beef and caramelized onions.  Seriously, you could pick up this thing and eat it like a hot pocket.

If you want a sandwich, Royal has you covered there, too.  There are several varieties available, among them a design-your-own-sub option.  They take their bread seriously, and usually have several varieties for sale (including a poppy seed bread that I’m very curious about).

Occasionally, however, I come across a dessert that makes me reconsider my position on desserts.  The Cream-Filled Cookies are just such a treat.  I expected it to be crispy, but the bread component has more of a soft, waffle-like texture, rolled and filled with a nutty flavored whipped cream before both ends are dipped in chocolate.  These things are cheap and well worth it.

I’ve tried and seen other things as well.  Several very satisfying coffee drinks.  A bite of a co-worker’s cabbage roll that was surprisingly flavorful due to a sweet/sour sauce that they are simmered in.  Another co-worker had a very tasty-looking croissant breakfast sandwich, and I’m still curious about their soups, dumplings, smoked salmon turnovers and the unusual-sounding Tuna Twist breakfast crepe.  For those of you who do dig on desserts and pastries, there is a selection of other cakes, cookies, cheesecakes and danishes to choose from.  I was hoping to actually have a sit-down dinner at the place at least once before writing them up, but with potentially only weeks to go before they close up shop, it seems more important to just get this information out so anyone who’s interested can try it while they still have the chance.  Royal Bakery is already one of my favorite eateries, and well worth the short drive from Boise/Eagle/Meridian/Etc.  Just bear in mind that they focus mainly on lunches and are open 11am-5pm Monday through Thursday, and 10am-7pm Friday and Saturday.

Food:  I’ve been there several times and so have several of my co-workers, and the only complaint so far was one person saying the potatoes were little greasy; the woman she was sharing them with disagreed.  A
Value:  Everything on the menu is $10.99 or less, much of it significantly less.  A+
Service:  Like I said, the proprietor is a sweetheart.  She’s the culinarily-inclined Eastern European grandma I never had.  A
Atmosphere:  Charming little cafe style place.  Too bad it’s surrounded by buildings and parking, because a view is just about the only thing that could make it better.  A-
Final Grade:  A