For a while there, I was really behind on my reviews.  I’m starting to get caught up now, but the places I’ve visited recently have had to go to the bottom of the stack while I wrote up restaurants that I visited weeks or even months before.  In one case, that backlog has allowed me to work through most of a particular eatery’s menu, and I’ve decided I just need to write them up and get it over with. 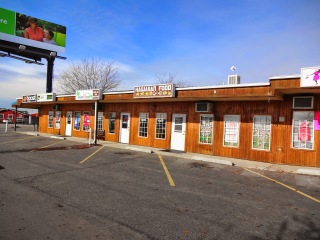 I’ve mentioned that a lot of restaurants in Nampa tend to not pay much attention to their exterior appearance, but the little wooden strip mall that houses Island Kine Grinds is actually kind of cute.  Not to mention diverse; the same strip also houses a deli, a Mexican market and bakery, a clothing store, a cell phone store, a bar, a church…well, you get the idea.

The also have the distinction of being a regular lunch stop for me, not only because they’re five minutes from my office, but also because they’re the first Hawaiian eatery that I’ve truly enjoyed.  I’ve eaten more Hawaiian food than most people I know who have never been anywhere near Hawaii, having tried it at no fewer five places in the Boise area alone.  All of them have had highs and lows, but Island Kine Grinds is the only one that’s tempted me beyond a second visit.  I tend to go there roughly two or three times a month, which is how I’ve gone through so much of their menu so quickly.  As with most places I’ve visited multiple times, I have no specific anecdotes fresh in my memory for context, so I guess we’ll just have to talk about the food.

I figure we might as well start at the beginning.  The first thing I had at IKG was the “Da Grinds” Mix Plate, their version of the combo plate that every Hawaiian joint seems to serve: teriyaki beef, teriyaki chicken, and kalua pig, with two scoops of steamed rice and one scoop of mac salad.  The beef didn’t wow me, which isn’t to say that I didn’t like it, but it paled in comparison to the rest of the plate.  The chicken was the most surprising.  Rather than grilling it and dumping teriyaki sauce on it, the chicken seemed to have been basted with the sauce and wound up more like a barbecue glaze,which I enjoyed quite a bit.  The pig was flavorful, juicy but not mushy, maybe the best example of the dish that I’ve come across.  The macaroni salad wasn’t the best I’ve had, but it was still very good.  The big surprise of the meal for me (aside from the teriyaki glazed chicken) was the fact that rather than serving up two indifferent-seeming lumps of rice, IKG sprinkles theirs with furikake, an awesome and much-appreciated touch that I’ve never come across before.

On my next visit, I decided to branch out a bit from the “big three”.  I went on a Friday because that’s the day IKG makes Lau Lau.  I’ve only ever had the dish once before and wasn’t impressed, but the fact that this version was made with both pork AND butterfish.  I also added an order of Spam Musubi and a side of kimchee.  Hey, I fasted all day in preparation for this.

Now I’ve had musubi before, but never like this.  Previously it was served nigiri-style, a huge pressed square of rice supporting a hunk of Spam, wrapped with a strip of nori.  This version was much more in the maki tradition, Spam in the middle surrounded by rice, and the whole completely wrapped with the nori.  You wouldn’t think that a slightly higher seaweed ratio would make that much of a difference, but it does.  No better or worse, just different, and still delicious.  If you like Spam, that is.
The kimchee that Island Kine Grinds serves isn’t that slightly spicy slaw you get sometimes when a pub puts a Korean BBQ burger as their special, it’s a little more old school.  It’s chunky, funky, tangy, hairy, and spicy.  It’s a taste I think I could become acquired to.  As for the Lau Lau, it made me forget the previous disappointment I had with the dish.  That having been said, my limited experience leaves me with difficulty finding the words to describe it.  The fish adds a richness to the pork, and the leaves add a flavor that doesn’t taste like anything else I’m familiar with so that I can give you an example for comparison.  Not a very satisfying description, I know, but it IS good.  I think further research may be in order.
Back to the subject of Spam, if you’re a fan of that particular item (either openly or as a guilty pleasure), you’ll find a lot to love on IKG’s menu.  Of my favorite examples is the Fried Noodles, kind of a play on chow mein or yakisoba, they come with fish cake, Spam, green onion and mixed cabbage.  I know they will look and/or sound horrifying to many of you, but I genuinely dug them.  Judge me if you must.
Less successful for me was the Portuguese Sausage Fried Rice.  I dug the rice, egg, green onion, carrot, and of course the Spam.  I even dug the sausage, I just didn’t care for the combination of it with the other things.  The fact that it was sliced rather than diced made it an easy fix though, I simply removed the sausage and ate it separately.  I recommend availing yourself of the Hawaiian soy sauce the restaurant keeps on hand, it’s a little sweeter and a little less salty than most, and makes a welcome addition to this dish.
I might as well talk about the only dish I’ve actively disliked at Island Kine Grinds and get it out of the way.  Loco Moco is another ubiquitous Hawaiian dish, consisting of rice topped with one or two hamburger patties, which is then topped with gravy and eggs.  It sounds awesome, but something in the execution didn’t work for me.  Maybe it was the gravy itself; I couldn’t get past the feeling that it might be at least partially mushroom-based, which is something I just plain don’t like.  If you do a search on Google, it quickly becomes obvious that there are a lot of variations of this dish, and I can’t help but think that a more purely beef gravy and a hand-formed burger patty rather than a fast food-style one would have made this dish an instant favorite for me.
On the opposite end of the spectrum, there’s the Pork Adobo, which I finally tried on my last visit and which is easily one of my favorite items IKG serves.  My familiarity with this dish was based entirely on the Spanish and Portuguese varieties, while this version seems to be taken from the Philippine style that I wasn’t even aware of.  The less time spent on that, the better, especially since it’s apparently something of a national dish there.  Embarrassment aside, cubes of pork belly are slow-cooked in soy sauce, vinegar, peppercorns and bay leaves.  I expected a simple marinated meat, but what I got was like an Asian take on a slow-cooker pot roast (down to the couple of chunks of red potato that were included).  It was juicy, it was flavorful, and it was so tender that it fell apart with a minimum of encouragement from my fork.  It was a delightful new spin on an old comfort food favorite that I had the good fortune to order on a grey, rainy day.  In other words, it couldn’t have been more perfect.
That’s a good portion of their menu, and only one item that just plain didn’t do it for me, which is a pretty successful ratio.  The proximity to my workplace, reasonable prices, and good flavors ensure that I’ll be a loyal customer for a long time to come, and I highly recommend that you give them a try yourself.
Food:  Starchy, yummy, salty and meaty.  Definitely not stuff you should eat every day, but it makes an awesome treat from time to time.
Value:  The most expensive thing on the menu is $10.95, and very easy to get a second meal out of.
Service:  Very friendly, and very proud of the authenticity of their food.
Atmosphere:  On the fountain soda machine, there is a sticker encouraging you to mix half fruit punch and half Sprite to create a “Sprunch”, apparently a fast food favorite in the Islands.  It’s just a fun place.
Final grade:  A