So the West End Food Park has barely gotten started, and they’re already in trouble by some accounts.  I had hoped the worst had passed once the Kickstarter was funded (after all, some people tend to be more likely to support something once someone else has done all the work), but between the busy Summer season  for the trucks and the variety of excuses from potential patrons as to why they can’t or won’t show up, it seems like WEFP is having trouble shifting up to the next gear.  The first time I want down there, there was literally one truck in a cracked asphalt lot.  Now there are portable toilets, a hand sanitizing station, covered seating, and painted parking spots for both trucks and patrons.  I’ve only made it down three times myself so far, but each time has offered different eats and general improvements.  How about some visuals? 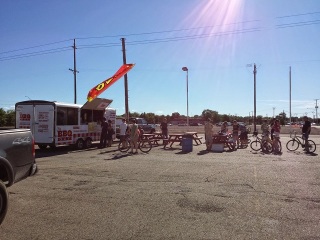 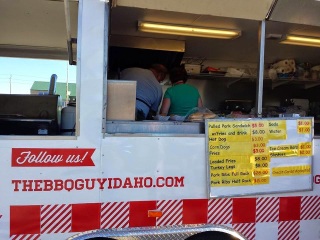 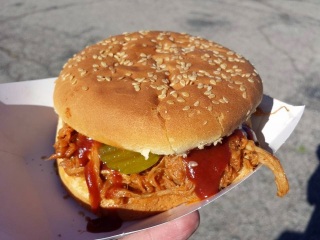 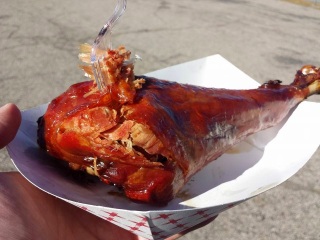 Turkey Leg, tender enough that it can be eaten with a plastic fork. 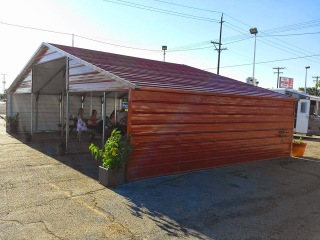 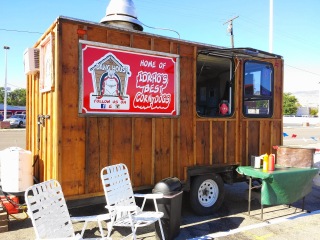 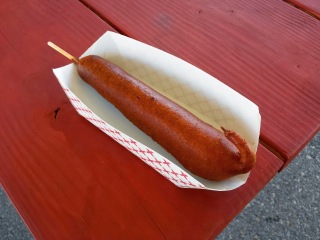 It’s not just a cute name.  These are giant, hand-dipped and delicious.  They even have honey available as a garnish.  Don’t knock it unless you’ve tried it!. 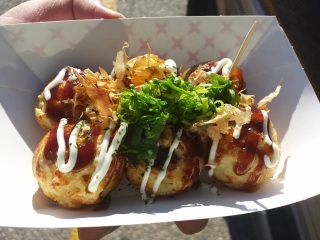 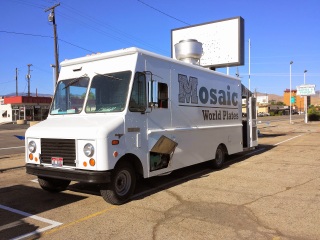 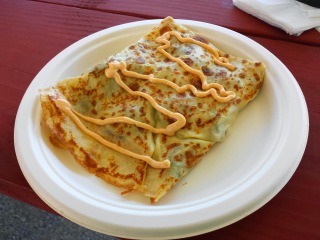 The “Ham and Cheese” – Cheese, prosciutto and bacon.  The crepes were a little thicker and chewier than others I’ve had, which was not a bad thing because it makes them more substantial. 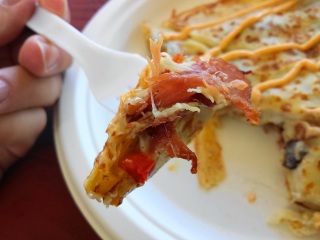 Just look at all that porcine goodness! 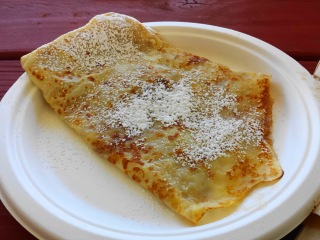 So you see, it’s coming along.  Unfortunately, it seems like a lot of people are holding off.  They don’t like the location, they’re waiting for more trucks to show up, they’re waiting until things are fully up and running so they can get the full effect, blah blah blah.  What it boils down to is that the few trucks making an effort down there?  They’re the pioneers.  If you want eight trucks to show up, you have to go down and throw some money around right now even though there are only two trucks.  If those trucks are making profit and selling out of their supplies on a regular basis, other trucks will notice and take a chance.  I know the ground floor is not glamorous, but people in Boise have to learn not to be so casual in their approach to things like this, because nothing is ever going to be perfect, and without support it won’t even get close.  Take a chance!  I’ll even make it easier by including WEFP’s newsfeed below so you can see what trucks will be there and when, so get down there and help it become what we all want it to be.