On the whole, this working in Nampa thing has been a positive experience food-wise.  I’ve found unique sandwiches and sushi, addictive Hawaiian, surprisingly good Thai, even a combination Mexican and gyro joint.  But it hasn’t been all moonshine and corn dogs.  There is no Indian food.  I have yet to find a truly good burger place.  And despite several attempts, I’m pretty ready to declare that there simply is NO good Chinese food in Nampa.

Let’s make something clear here: despite my fondness for authentic cuisine and my constant bemoaning of the lack of it in the Treasure Valley (especially Chinese), I LIKE Americanized Chinese food.  For good or bad, it’s pure nostalgia for me.  I grew up on it, and used to beg to go to those buffet joints the way most kids begged for fast food burgers and chicken nuggets.  So, finding a fix in 2C was important, and so far it’s been a largely unsuccessful endeavor.  Let’s check out a few together.

Chung Hing is located on Cassia in Nampa, near the Edwards that’s not near the Idaho Center.  They were recommended by a reader based on my love of Yen Ching, and I was assured that the food was pretty similar.  I didn’t end up agreeing with that assessment. 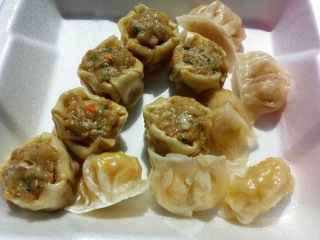 When I found out that Chung Hing had a few dim sum items, I couldn’t resist adding some to my order.  Nothing like the varieties at Yen Ching at all, if you put a gun to my head and made me guess, I’d have to stay this stuff was frozen.  The har gow was a little dry and flavorless, and I just didn’t care much for the flavor of the shu mai.  I should have been wary when they gave me sweet and sour sauce to dip the dumplings in.

I also ordered a lunch combination of sesame chicken, fried rice and some chow mein noodles.  The bonus, soggy rangoon was a surprise, but at least it tasted good.  The noodles were a little on the bland side, and the rice was both bland and a little on the damp side.  The sesame chicken was literally swimming in sauce, which unfortunately didn’t do anything to help the fact that it had been overcooked from crispy to downright chewy.  I had considered trying one of their more authentic options, but ended up writing the whole place off after this meal.

Hong Kong Restaurant, located in Downtown Nampa, actually used to be a favorite of mine during my teenage years.  I dug their non-greasy rice, their brown sweet and sour sauce (I’m not big on pineapple), and their unique batter that seemed to have cornmeal mixed into it.  Unfortunately, due to the fact that I didn’t have much reason to be in Nampa in those days, I never made it to Hong Kong very much.  I looked forward to reconnecting with them when I found out our office was moving to their general area.

The fried rice still is still non-greasy, but it seemed a little lacking in flavor on my recent visit, so I did make liberal use of the included soy sauce packets.  Not horrible, but I wasn’t craving it again the next day either.

Although I can’t put my finger on it, the batter recipe seems to have changed a bit, and unfortunately the sweet and sour pork was on the greasy side before the sauce was added.  The brown sweet and sour sauce is still there, but the balance seemed off (much higher in vinegar than I remembered).  Once again, not bad, but not great either.

As for the egg roll, it was the old school kind, heavy on the pork and light on the veggies.  Not content with simply using an egg roll wrapper, they batter and fry the roll after wrapping.  And yeah, it was a little on the greasy side as well.

Shang-Hai Restaurant has the least amount of pretense toward authenticity of any of the restaurants I’m discussing here.  That having been said, they’re probably my favorite of the three.  I first ended up trying them because a bunch of co-workers were ordering food to be delivered.  Just to keep things fair, I decided to try the same kinds of food that I had gotten from the other two places.

Demonic red sweet and sour sauce, true, but the flavor was decent and the pork held no unpleasant surprises.  It was neither greasy or gristly.  I dug the crunchy chow mein noodles much more than the soft version I’d had elsewhere, even if the sauce was a little on the bland side.  The biggest treat was the fried rice.  It wasn’t greasy, it wasn’t dry, it wasn’t damp, and it carried just a hint of toasty flavor from its time in the wok.  Easily the best of the generic Americanized Chinese food options I’ve found in Nampa.  Another plus is that they have a buffet setup, and for a flat charge of around eight bucks you can cram one of those three compartment take-out boxes with a much variety and volume as it can hold, including multiple kinds of rolls, rice, noodles, various protein options, and even giant onion rings that are surprisingly good.  Not the best but far from the worst, Shang-Hai is my go-to for to-go in Nampa.  Of course that doesn’t mean that I’m not open to other options, so feel free to share if you have any recommendations.

And yes, I’m aware that the order I ranked the three restaurants in is diametrically opposed to their rankings on Urbanspoon.  To that I can only say…actually, I got nothing.