One thing I’m learning about eating in Nampa is that the further you get away from the historic downtown area, not a lot of attention is paid to how a business looks on the outside.  I have stepped across the thresholds of several eateries that were a little sketchy-looking, only to find myself in a cozy little place staffed by friendly people who made me feel welcome and were happy to share their love of food.  One such place is Krung Thai. 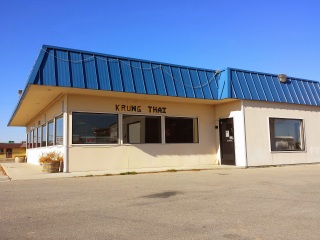 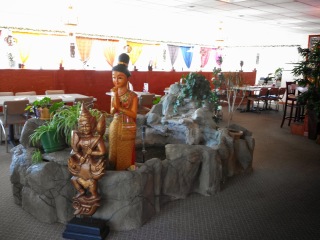 I won’t lie, the carpet does desperately need to be replaced.  Still, I like the statues, the fountain, the colorful decorations, even that one corner table every Mom and Pop Asian eatery seems to have that just holds extra supplies like napkins and straws.  Occasionally you’ll see an employee sitting at that table doing paperwork or taking a break to get some food on their stomach.  I’m not sure what the deal is with that “house table”, but I’ve always found it kind of charming.

The lunch combos at Krung Thai come with an entrée, a small spring roll and steamed rice.  They’re all $6.95, but for an extra four bucks you can get the Sushi Lunch Special, which adds one piece each of tuna and salmon nigiri, and four pieces of a roll from the small rolls section of the menu.  This, of course, is what I did my first time there.  I chose Pad See-Ew simply because it’s one of my Thai go-to dishes (turns out it’s a popular street food item, I must be able to sense that stuff), and the eel & Cucumber roll.

Not much to say about the steamed rice, it was fluffy and moist without being soggy.  The spring roll is, interestingly enough, cut into three pieces and put into a compartment of the take-out container along with what would normally be a dipping sauce.  It didn’t bother me, but people who like to go light on sauce might not approve.  The Pad See-Ew was good, not the best I’ve ever had but FAR from the worst.  Personally I refer Krung’s to, say, Pad Thai House.  Everything tasted good and was tender without being mush, but the veggies could have been cooked a little longer, as they were just a little bit closer to raw than I normally like.

On the sushi front, what you get isn’t as good as what you would get at most of the Japanese restaurants in Boise, but it’s definitely better than some of them.  The fish wasn’t too fishy, the rice wasn’t packed too densely, and the flavors were good.

On my second visit, I just stuck to sushi.  There are several Thai restaurants around the Valley that have sushi available, but Krung goes a little beyond that..  I’d say sushi makes up about half of the overall menu, and there are some interesting choices available alongside the usual suspects.

Deep-fried sushi rolls aren’t exactly a new thing, but this item is in a class by itself.  What you see above is the Bacon Roll and, as its name implies, there is bacon involved.  There is also snow crab, avocado, cucumber, bell pepper, and nori.  All of this is wrapped up together, battered and fried, and topped with kabayaki and spicy mayo sauce.  I think what surprised me so much is that rather than the bacon being chopped up or being the centerpiece, it’s rolled with the rice on the outside, then a very thin bacon is used to wrap up the whole thing before it’s battered, which means you don’t end up with a lot of breading.  A lot of places trying to do this item would focus too heavily on the bacon and the whole thing would be out of proportion, but instead it winds up being very balanced.  The only bad thing about it was the fact that it tasted like the oil may have been a bit old.  Unfortunately, this is a problem I seem to keep running into in Nampa.

Unfortunately, this level of balance is not to be found in the Pad Thai at Krung’s, which I ordered on my most recent visit and which suffers from the same too tangy and/or too sweet problem that seems to exist everywhere but at Pad Thai House.  Not much more to say about that.

I also added an order of Shrimp Balls, just in case I didn’t end up liking the Pad Thai.  From a technical point of view they were very good, though they made me long for the even better ones I used to get at the Boise Urban Market…sigh.  Still, that old oil taste was here again, and it made the dish less enjoyable.

So, pretty equal on the hits and misses front, but when all is said and done it’s pretty safe to assume I’ll return to Krung Thai.  The food isn’t the best Thai or sushi available, but there are some stand-out items.  Plus they’re only five minutes from my office, so there’s that.

Food:  I’ll probably avoid the Pad Thai and deep-fried items in the future, but I’m definitely interested in further exploring their menu.
Value:  About what you’d expect, not cheap as hell but not ridiculous either for what you get.
Service:  Very friendly people, and very efficient.
Atmosphere:  That kind of fun cheesy that Asian eateries excel at, but the place could stand to be spruced up a bit.
Final Grade:  B-